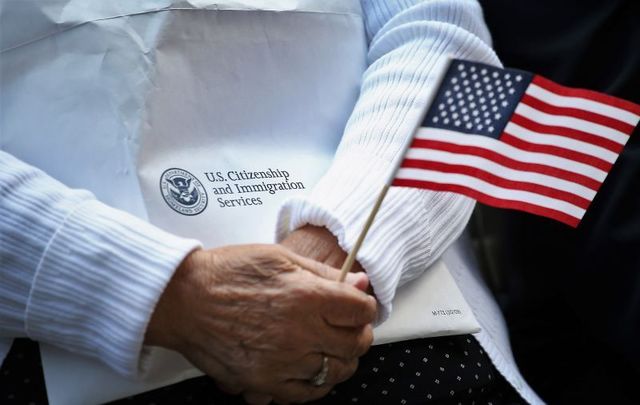 Boston's Irish International Immigration Center says it will continue to work with immigrant families affected by the new change of course. Getty Images

Boston’s Irish International Immigrant Center (IIIC) held a press briefing on Monday after clients at the center received letters informing them that their “medical deferred action,” which allows them to stay in the US to receive life-saving treatments, have been abruptly rescinded. Very ill children are the worst affected.

The Boston Globe reports that twenty immigrant families based in Boston received letters last week from US Citizenship and Immigration Services informing them that their legal protections - which allowed families to stay in the US, receive Medicaid, and work - are being terminated.

According to the IIIC, the letters said that the agency’s field officers “no longer consider deferred action requests, except those made according to the US Department of Homeland Security policies for certain military members, enlistees, and their families.”

WBUR shared redacted versions of three of the letters that the families received, all of which were signed by Field Office Director Michael J. McCleary and dated between August 15 and 16. The letters indicate that the recipients have 33 days from the date of the letters to leave the country.

Shannon Dooling, a journalist with the Boston-based WBUR,  tweeted on Monday evening that US Citizenship and Immigration Services later clarified that medical deferred action requests "are now submitted to ICE for consideration," which was reportedly not made clear to the letters' recipients:

UPDATE: serveral hours after publishing our original story and after several requests for further clarification, @USCIS says #medicaldeferredaction requests “are now submitted to ICE for consideration.”

This new process was never mentioned in any of the denial letters. https://t.co/mc6aB3EaLS

On Monday, the IIIC said in a Facebook post: "Last week, families with pending deferred action applications began to receive notices that their requests had been denied with no consideration. For those unfamiliar, deferred action is simply a means by which the government may say, 'while we could deport you, we are opting not to, because we recognize the urgent reasons for you to be here.'"

"Almost all of these cases involve those who have traveled to the U.S. and have fallen gravely ill. The illness or injury can make it impossible for an individual to leave, lest they stop life-saving treatment that is not available in their country. Here at the IIIC, many of the cases we represent are those of sick children."

"We represent children with cerebral palsy, HIV, leukemia, Duchenne's muscular dystrophy, children confined to wheelchairs, and on feeding tubes. The Trump administration has given their parents an ultimatum; leave the U.S. and let your child suffer or even die, or stay in the U.S. and get deported."

Last week, families with pending deferred action applications began to receive notices that their requests had been...

Ronnie Millar, executive director at the Irish International Immigrant Center, said: “This attack on children and their families is inhumane and unjust.”

“These families are all here receiving treatment that is unavailable in their home countries, and our government has issued them a death sentence. Just when you think the administration can’t sink any lower, it finds a new way to torture people – and, increasingly, with a bizarre focus on hurting children.”

He added: “The IIIC will continue to stand up for the basic human rights of immigrant children and families.”

Anthony Marino, director of legal services for the Irish International Immigrant Center (IIIC), said: "The denials say specifically that the immigration service is just no longer considering deferring action at all in these cases, which would be a first in decades.”

Read More: How Irish America feels about the undocumented Irish

The IIIC also hosted a press briefing regarding the matter on Monday, which was attended by Senator Ed Markey, who said: “It’s unconscionable, it’s just wrong.”

“We’ve reached the most inhumane of all of Donald Trump’s policies.”

A powerful call to action from @SenMarkey to ALL Americans to fight to save the critically ill patients whom this administration wants to deport to their deaths. Not now, not ever! pic.twitter.com/oAGKCvArli

By no longer considering medical deferred action requests for immigrants, the Trump administration is now literally deporting kids with cancer. Proud to be with @MIRACoalition and other advocates to stand against the deportation of sick, vulnerable children. https://t.co/o2Q0iLrTbJ

Perhaps that's why they were too ashamed to publicize the end of #medicaldeferredaction, says Markey.

"Not now, not ever, not in the name of the American people."

Marty Walsh, mayor of the city of Boston, was not able to attend Monday’s press event, but instead issued a statement:

Disregarding immigrants’ requests to temporarily remain in the US for life-saving treatment is absurd and inhumane. We stand in support of our health and legal professionals who work tirelessly to eliminate barriers to care. https://t.co/sDpbLRpSdN

“Disregarding immigrants’ requests to temporarily remain in the United States for life-saving treatment, many times non-existent in their home countries, is absurd and inhumane. The federal government’s recent practice to categorically refuse immigrants’ requests for deferred action shocks our collective conscience and violates the basic standards of human decency."

"Boston is a city known for its world-class medical centers, and we stand in support of our health professionals who are committed to providing care to everyone and the legal advocates who work tirelessly to eliminate barriers to accessing care.”