COVID: Derry husband waited to be reunited with his wife before they died

After 13 days in hospital this elderly couple, with no underlying issues passed just six minutes apart. 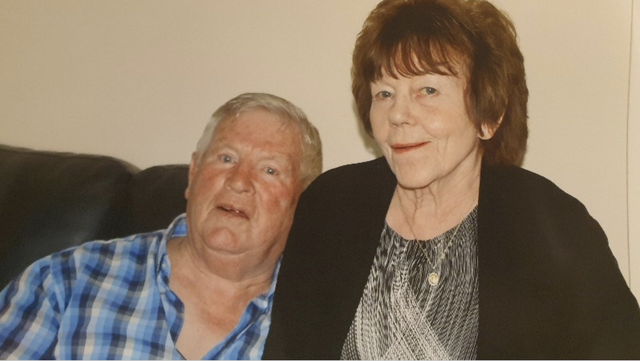 Grandparents of seven died holding hands at Altnagelvin hospital ICU after they both fell ill.

The children of Barney (81) and Sarah (Blossom) McGlinchey (78) who passed away within six minutes of each other, holding hands, have said that their father waited to be reunited with his wife before he passed.

The couple aged in their 70s and 80s, from Greystreel, County Derry, passed away on Jan 20 after being diagnosed with COVID-19, and both deteriorating quickly. Thirteen days after their admittance to hospital their children go the phonecall they'd been dreading.

One of the McGlinchy's five children, Lynne, told the Derry Journal, that their mother was in the Intensive Care United when her old sister, Libby, was called in to visit their mother during her last hours.

Their father was being treated on a COVID ward. Shortly after Libby was called to visit will her father who was also gravely ill. The hospital asked the family if they would approve of bringing the couple together as they were very close to death.

Lynne told the Derry Journal “We wanted them to be together. It was an assessed risk because dad was so poorly they were worried he could die on his way to ICU to be with mum. But he didn’t. He held in. He was waiting on her. They were brought together in ICU with my sister Libby and they passed away holding hands six minutes apart. My dad died at 16.55 and my mum died at 17.01. They were going home and we believe they were together on their final earthly journey, holding hands, holding rosary beads. They passed away together.

“The nurses and medical staff showed great emotion. The emotion that those professionals must feel and take home with them, it’s not something you can switch off from.”

“I think it’s important to get the message out so that it saves other hearts breaking. Mum and dad were the most vulnerable in our family that we tried our best to protect them," Lynne said.

She added "They had no underlying health conditions. It was Thursday, January 7, that we had to make the 999 call."

The grieving daughter went on to commend the frontline staff, doctors and nurses who cared for their parents.

She said “It was at a personal level. They would say they would love you as a family to be here with your mum and your dad. Every call you got your heart was in your mouth. You just thought, is this it now? Who is going to go first? How will we tell the other person? Do we tell mum if dad goes? All those kinds of thoughts.

“Every conversation when mum and dad regressed in their health - they were so respectful in how they delivered it. You could hear the emotion in their voices. The consultant would ring you with the end-of-life discussion and you knew they didn’t want to be delivering the news.”

The family has now established a JustGiving page to raise funds for "the ICU and COVID wards of Altnegelvin hospital who cared" for their parents. So far they've raised £5,872.