Don Victor Mooney of Queens, New York, rowed from Maspalomas in the Canary Islands to the Brooklyn Bridge between February 2014 and November 2015 in a grueling 21-month journey loaded with enormous challenges. 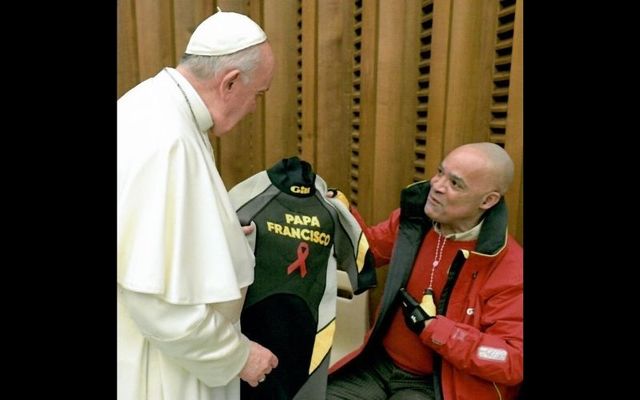 A New York native with Tyrone roots was invited to meet Pope Francis on World AIDS Day 2021 after rowing across the Atlantic Ocean to raise awareness about HIV.

Don Victor Mooney of Queens, New York, rowed from Maspalomas in the Canary Islands to the Brooklyn Bridge between February 2014 and November 2015 in a grueling 21-month journey loaded with enormous challenges.

It was Mooney's fourth attempt at a transatlantic crossing in a bid to encourage people to get tested for HIV. He was previously rescued at sea on three occasions, once surviving 14 days on a life raft and once escaping a pirate attack.

He also escaped an attack from an oceanic white tip shark on one failed voyage and had lost an incredible 80 pounds by the time he reached New York.

Mooney undertook the grueling challenges over a 12-year period in memory of his brother, who died of AIDS, and to encourage people to get tested.

Mooney was invited to attend Pope Francis's General Audience on World AIDS Day on December 1 along with his family after completing the row.

He also had a second audience with Ghanian Cardinal Peter Turkson, the Prefect of the Dicastery for the Promotion of Integral Human Development.

Mooney additionally commemorated the 17th anniversary of a papal blessing from Pope John Paul II ahead of his first attempted transatlantic row 17 years ago.

Mooney, whose Irish heritage can be traced back to County Tyrone, is a co-founder of the Irish African American Society of North America and also served as an international election observer for the Good Friday Agreement.