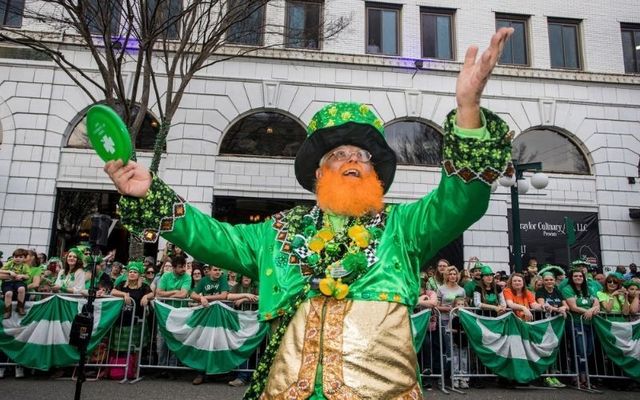 Locals in Hot Springs, Arkansas - the home of the "First Ever World's Shortest St. Patrick's Day Parade" - have been curious to know if their beloved town extravaganza will be making a return in 2022, and it looks they finally have an answer.

“The parade is on,” Steve Arrison, CEO of Visit Hot Springs and one of the founders of the internationally famous parade, confirmed.

“Cheech Marin and Danny (Machete) Trejo have had their bags packed since 2020 to serve as the celebrity grand marshal and official starter of the parade, and they’ve said they can’t wait to get to Hot Springs and help revive the parade in all its massive glory."

He added: “The World’s Largest Potato on Wheels is wending its way toward Arkansas to make a return appearance.

"Razorback Coach Sam Pittman and his wife, Jamie, are ready to be our parade king and queen.

Monte Everhart, known locally as "The World's Biggest Leprechaun," said: "I’ve been asked quite a few times in the last few days if Hot Springs is going to have ‘that St. Patrick’s Day Parade’ this year.

"The short answer is that heck yeah, we’re marching March 17," he revealed.

Everhart will be joined this year by a new leprechaun buddy, Arkansas radio personality Roger Scott, a Hot Springs native, who will help whip up the crowd as the parade’s official leprechaun duo.

Dick Antoine, who passed away in 2021, was the parade’s World’s Tallest Leprechaun from the very beginning of the parade in 2003 until health issues forced him to retire in 2020.

“Dick Antoine was a tireless advocate for Hot Springs for a generation,” Arrison said. “He was involved with the St. Patrick’s Day Parade from the inception until 2020, and he and Monte, The World’s Biggest Leprechaun, entertained hundreds of thousands of parade-goers over the years.

“No one can ever replace Dick, but Roger will prove to be just as entertaining for the crowds.”

The parade, which began in 2003, annually attracts crowds of upwards of 30,000 people to watch an insanely zany collection of Irish Elvis impersonators, green Irish wolfhounds, marching units such as Paddy O’Furniture, Irish belly dancers, and the Dallas Cowboys Cheerleaders, as well as other unique units cover the 98-foot length of Bridge Street, the World’s Shortest Street in Everyday Use.

Last year to stay safe, the "World's Shortest St. Patrick's Day Parade" was canceled, but to keep the tradition alive, locals in Hot Springs held a flash mob to celebrate: