Tracing and celebrating the success of the St. Barnabas GFC in New York since its inception 50 years ago. 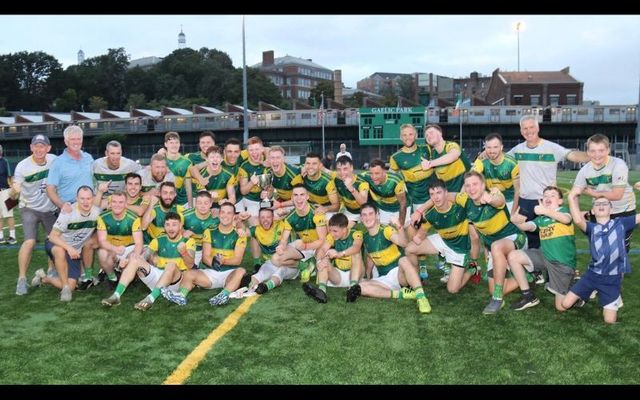 Though the GAA is generally perceived as a local and parochial organization, it does respond to global and economic conditions.

During the Great Depression and World War II, a New York Minor Board was set up to address the shortfall of Irish immigrants. The board flourished until the floodgates of Irish immigration opened in the 1950s and then went into decline.

However, the Immigration and Nationality Act of 1965 had a major effect on the number of Irish people coming to the US, and in response, the New York Minor Board was reformed in 1970. A host of new clubs surfaced, and among them was St. Barnabas in 1972.

With the officers elected, the next big decision was about the design of the jersey. The contingent of Murphy, Healy, and Cotter had a powerful proclivity for the Kerry green, while Markham and Hanglow were equally adamant that the yellow of Clare and Roscommon was of equal importance. John Davey’s white, which was the dominant color then on the Sligo jersey, also had to be accommodated. After a long discussion, it was decided that the bulk of the jersey would be green and yellow, while the cuffs and collars would be white.

The club entered under 10s and 12s teams in its inaugural year. Now, in 2022, it hosts teams. The acme of success was winning the senior championship in 2020.

After fast growing pains, the club earned its first title in the under-12s in 1974, defeating St. Josephs, by 1-4 to 1-3. Danny Healy was manager and John Davey was the trainer.

The next year it was reported that St. Barnabas were under 10 champions with a superb victory over Celtics, with Eugene Hanglow playing a captain’s part, much to the delight of manager Tommy Murphy and coach Richie Hanglow.

During these years, most teams practiced and trained in Van Cortlandt Park as teams commandeered scarce spaces, almost akin to squatters’ rights. Word was that young St. Barnabas players got bounced or bullied from their spot by senior players.

Paddy Markham was incensed and he became acutely aware of the need for a safe and secure spot for the youngsters to train. There was a small clearing in the woods of the Woodlawn area that was a veritable dumping ground. Paddy got in contact with Parks Department officials and the principal politicians to persuade them that the dumping ground could become a playing field.

So in 1976, Paddy’s Field came into existence, with Paddy taking the lead in organizing muscle and manpower from the Irish and Irish American community in a meitheal-like fashion. Initially, the plot measured 115 by 80 yards, but later with the help of some phenomenal fundraising, it was developed into a regulation-sized field, which was officially opened and blessed in 1979.

They closed out the '80s by claiming their first under-18 title, defeating Rockland by 1-6 to 1-3. The roll of honor was impressive in the '90s. It essentially trebled from the previous decade, with the under-12s garnering six consecutive titles.

However, one particular accolade stands out, and that’s the first under-21 title in 1995. Celtics looked set to win, leading by six points with 10 minutes left. Then three quick points and a goal tied the sides. Then the goalkeeper’s clearance was blocked by John Naughton and rifled into the net by Paddy O’Connor for the win, 3-10 to 2-10.

Barnabas had a little extra help as Neville Dunne had already won an All-Ireland Minor medal and a National League medal with the Royal County. In addition, the fiery Kerryman, Paddy O’Connor, along with Neville would progress to captain and play for the New York team. I happened to be the referee, and Hubert Burns was manager.

Given the persistent excellence at younger ages, it’s hardly surprising that success would be parlayed to under 18s, 21s, and juniors in the new millennium. Indeed eight of the under-21 titles were captured in that first decade. The big breakthrough at Junior B was in 2001, when St. Barnabas outscored Brooklyn, 3-21 to 4-16, after extra time. Top scorer and Man of the Match was Darren Meaney.

The next decade saw Barnabas become one of the biggest and most successful clubs in the Big Apple, hosting three adult teams and dominating the under-21 ranks. They defeated Westmeath, 4-11 to 0-10 in the Junior A final. Eamon Deane was manager and Frank Brady was trainer.

A few hours later, with 11 of the same players, they captured their sixth consecutive under-21 title, with Matt Schumacher as Man of the Match and Shane Flanagan top scorer. Mid-decade, they captured the Intermediate Cup, beating Kerry by 6-18 to 3-11.

In 2020, St. Barnabas beat Sligo, after a replay and extra time, 4-19 to 4-14 to claim the top prize in New York football. It was the old order against the new, youth versus experience, American-born against Irish-born, and the first by a Minor Board club in the highest-scoring football final ever recorded in New York. Making history were Brendan Cole, Shane Slattery, Conor Hogan (0-1), Jamie Boyle, Kevin Rafferty (0-1), Shane Hogan (0-3), Dylan Curran, Conor Rafferty (captain), Tiernan Mathers (3-3), Gearoid Kennedy (1-2), Sean Reilly (0-2), Mikey Brosnan (0-4), Dylan McDermott (0-2), Francis Cole (0-1) and Caolan Mathers. Sub was Peter Hatzer (0-1), and the backroom team was Mike Brosnan and Johnny McGeeney.

They repeated the feat in 2021, but Sligo halted the three-peat. Despite losing three other finals, St. Barnabas has a half-century of phenomenal success.

A dinner dance will be held on Saturday, November 26 at the Lake Isle Country Club. Visit St Barnabas GFC on Facebook for information.