Rosie Foley and her friend Andrea Newport completed the 28.5-mile swim in eight hours and 28 minutes, swimming under all 20 bridges connected to Manhattan in honor of former Irish rugby international Anthony Foley. 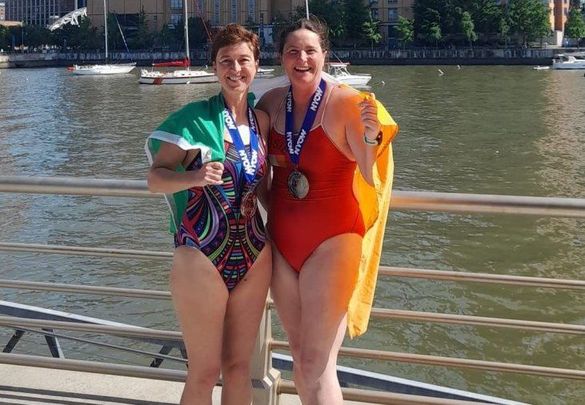 The sister of former Irish rugby international Anthony Foley has swum around Manhattan Island in memory of her late brother.

Rosie Foley and her friend Andrea Newport completed the 28.5-mile swim in eight hours and 28 minutes, swimming under all 20 bridges connected to Manhattan.

Speaking after completing the swim, Rosie said she felt "privileged" and a "little emotional".

Swimming in togs inspired by the famous red of Munster rugby with "FOLEY 8" on her back in a nod to Anthony Foley's number, Rosie was accompanied by three support boats and a kayaker during the grueling swim.

She was also cheered on from dry land by her husband Pat and their three children Oisin, Brendan, and Siofra in addition to Andrea's partner Alex, according to the Limerick Leader.

A former swimming instructor at the now-closed St. Enda's swimming pool in Limerick City, Rosie has previously swum across the English Channel, across Galway Bay, and around Cork City among several other enduring challenges.

Rosie and her sister Orla have completed a number of challenges to pay tribute to their late brother and to raise money for the Mid-Western Cancer Foundation, children's therapy charity CARI, and Cardiac Risk in the Young (CRY).

CRY is especially close to Rosie and Orla's hearts following the tragic death of Anthony Foley in October 2016 at the age of 42. An autopsy revealed that Foley died of a heart condition that caused a build-up of fluid in his lungs.

The pair have raised over €30,000 for the three charities to date. Click here to donate or to find out more.