Working champ, the Irish Bomber, Joe Smith talks about his unusual path to the top

Joe Smith Jr. is the new WBO light heavyweight champ who literally worked his way to the top, maintaining a union job as a laborer. 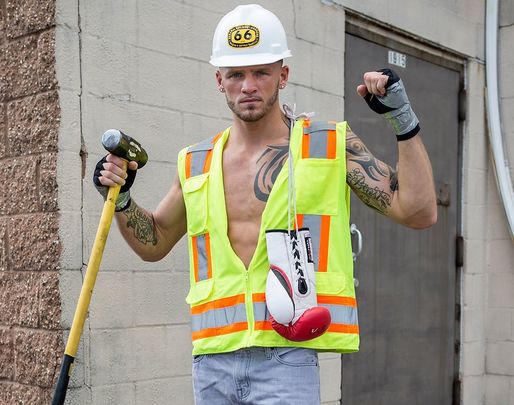 Newly crowned WBO light heavyweight champ Joe Smith Jr. earned his title the hard way – working as a laborer by day and training at night.  The Irish Bomber, as he’s known, talks about his unusual path to success.

COVID-19 tried to wreak some havoc on the pro boxing career of Joe Smith Jr. earlier this year, but thankfully that didn’t happen.  The pandemic delayed a championship bout and messed with his honeymoon plans, but in the end Smith persevered and not only won the WBO light heavyweight title in April, but married his sweetheart Kelly Reilly close to where he grew up on Long Island.

Most unusually Smith, 31, rose to the top of the light heavyweight ranks not by punching a bag or sparring all the time, but through hard, physical work as a member of the Laborers Local 66 union on Long Island which he still belongs to.  The Irish Bomber, as he’s known, has worked demolition jobs, carried heavy objects out of buildings, power washed a sewage plant and “basically spent a lot of days breaking up things,” he told the Irish Voice during a recent interview.

“I was one of the young guys on the crews so I was the one they sent to all the junk jobs, demolitions, things like that.  I’ve worked all over, every day – Hofstra University, a railroad station on Long Island City, all kinds of places.  A lot of physical work.”

Smith followed an unorthodox path to the elite professional boxing ranks where so many fighters live lives that are built solely around strict training regimens, but he wouldn’t have it any other way.  His fellow union members from all over the country were a vital source of support in his early days when he needed to build a fan network, and the rise and grind of a 4:30 a.m. alarm followed by a hard day’s work with the union provided Smith with discipline and strength. 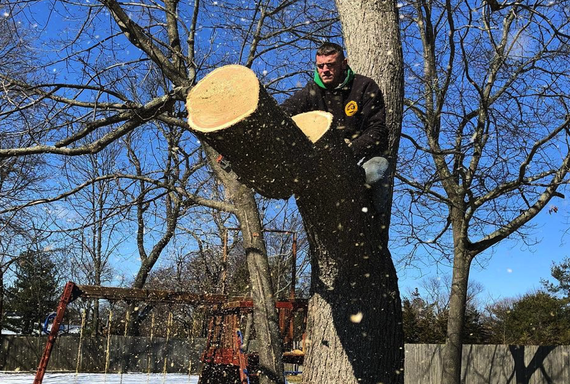 Joe Smith on the job, cutting a tree.

After he clocked out, it was off to the gym for evening boxing sessions with his trainer Jerry Capobianco.  It sounds exhausting, facing hours in a gym after hours of manual labor, and it was, Smith admits.

“It was tough.  But I was motivated. I also had good people behind me to make sure that I got to the gym every day.  There were days I didn’t want to go but my trainer picked me up from my house and said, ‘You’re going.’”

It was Joe Smith Senior who insisted that his 13-year-old namesake take up boxing as a way to keep him on the straight and narrow, so off he went to the Heavy Hitters gym in Ronkonkoma.   Joe Jr. is the eldest of eight, seven boys and a girl, an Irish American family from Mastic in Suffolk County.

Smith isn’t sure of where his Irish ancestors are from, nor has he been to Ireland but he’d “love to go” sometime.

“We would always celebrate St. Patrick’s Day in our house, going to Montauk for the parade,” he adds.

The Irish Bomber name came from one of his promoters. “We had a different one and he said, ‘Why don’t you just use the Irish Bomber? You’re an Irish guy.’  So the name stuck.”

Capobianco first met Smith at Heavy Hitters when the young fighter was about 17 or so.  Smith had been training well “but it was a chore at first,” he laughs.  “Then I started sparring and doing good against other guys who were there for a long time.”

A former fighter himself – his father John trained the legendary Long Island heavyweight Gerry Cooney – Capobianco said he could make a world champ out of Smith.

“When he first told me that I thought he was nuts,” Smith says.  “I had thought that maybe I could be a champ, but to even get the chance to fight for a world championship is hard.”

Capobianco’s brother Phil, another former boxer, became Smith’s co-manager and had the idea that having a secure job with union membership would be beneficial to his burgeoning boxing career – up until that point, 12 years ago, Smith had been working for a tree maintenance business with his father.  So he joined Laborers Local 66, working by day and training at night.

Smith turned pro around that time in October 2009 and notched his first win, a TKO in the first round on a card at the Mohegan Sun in Connecticut.  A bunch of victories followed, including a 2016 one against Andrzej Fonfara in Chicago which gave him the WBC’s international light heavyweight title.  Smith lost that belt a year later after going 10 arounds against Sullivan Barrera, but prior to that he defeated the famed multiple title champ Bernard Hopkins, 25 years his senior, in Hopkins’s farewell fight.

It was after the Hopkins win that Smith and his team thought it would be wise to put the day job on the back burner and focus on boxing more or less full time.

“I went back to work for like a week and then I said that I needed to make boxing number one,” Smith remembers.

But Smith didn’t totally abandon his background as a laborer.  In 2017 he and his father opened Team Smith Tree Service in Suffolk County, which gave Smith flexibility to primarily train and cut the odd tree when his schedule permitted.

“I’m able to work when I need to, and take off from the business when I need to. When I’m not there my father runs everything,” Smith says.

The bout he had been waiting for, a chance for the vacant WBO light heavyweight title, was signed and sealed for February 13 of this year in Las Vegas, or so Smith thought.  He’d be fighting the Russian Maxim Vlasov, his training camp was going well and he was ready for battle, looking forward to a mid-March wedding to Kelly and a Caribbean honeymoon right after. 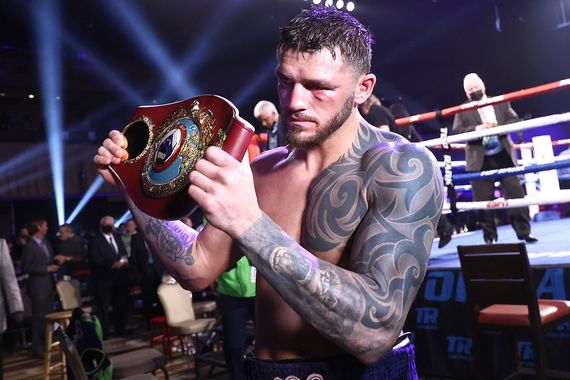 But Vlasov tested positive for Covid-19 a couple of days before the bout.  Smith was crestfallen but there was nothing he could do.  He postponed the honeymoon but not the wedding at Giorgio’s in Baiting Hollow, and the fight was rescheduled for April 10 at the Osage Casino in Tulsa, Oklahoma.

It was a hard-fought 12 rounder and required every bit of mental fortitude that Smith could muster.  The last three rounds were especially ferocious but the Irish Bomber cast his physical pain to one side, thought about how far he’d come and the other goals he wanted to achieve, and held on for a majority decision.

He was a cut-up, sore man afterward, but elated at finally being a WBO champion, just like Jerry Capobianco told him he could be.

“It was a tough fight, and when I went on my honeymoon I could definitely feel it.  But at least I was on a nice vacation where I could relax and recover,” Smith says.

“It feels great to be a champ. It gives me more motivation to just keep doing my thing and put on great shows.”

Like all belt holders, Smith is eager to make some serious money while he can. He’s casting his eye on the WBC and IBF light heavyweight champ Artur Beterbiev for a unification fight later this year, but nothing has been signed.

“The main goal is to keep winning and make some money in the next few years, this way I can retire and be comfortable,” Smith says.

These days he’s enjoying all the attention a WBO world champ receives, doing interviews, and even having a day named in his honor in his Mastic hometown.  The UFC commentator and one of the most popular podcasters in the world, Joe Rogan, is also a Smith fan and posted a congratulatory message on his Instagram after the victory over Vlasov.

So life is good as a newlywed light heavyweight champ.  “It is.  Kelly and I have been together for almost nine years so it’s not much different.  I’m hanging out at the beach.  I’m a big jet ski guy.  I’m getting our house together and enjoying myself,” says Smith, father to a 13-year-old daughter who lives with her mother in Florida.

But of course, he’s keeping an eye on the family business too.  “When I’m not training I’ll still jump in and do some work, but not today!” Smith says.

“I know they’re out working on trees today, but I’ve got a ton of yard work to do at my own house so I’ll let them be.”