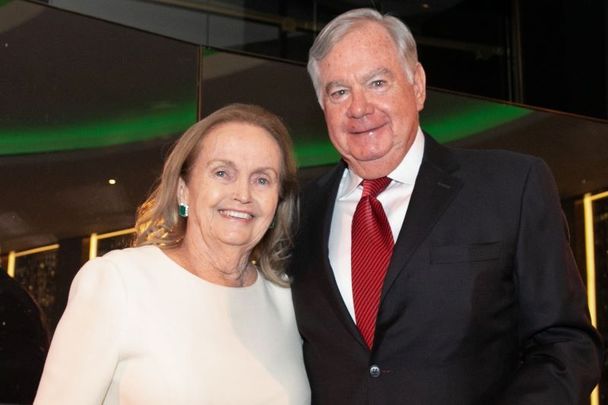 Glucksman Ireland House, NYU’s home for the study of  Ireland and the Irish diaspora, held its 10th annual dinner gala at the Rainbow Room in Rockefeller Plaza on April 11.

The gala, an annual fixture on the New York calendar, celebrates the best in Irish literature and arts, journalism, and philanthropy.

The evening raises awareness and funds to support the study of Irish history, culture, and literature,  the publication of leading research, convening of public lectures, and the documentation of Irish American experiences through the Archives of Irish America, and the Black, Brown, and Green Voices project.

This year’s Glucksman Award honoree was Eugene M. McQuade, chairman of The Ireland Funds America and the retired CEO of Citibank.

Oscar nominee Ruth Negga received the Heaney Award, and award-winning print and broadcast journalist Mike Barnicle was the recipient of the Hamill Award.

It was my honor to present @mikebarnicle with the Pete Hamill Award at the @GIHNYU gala Monday night, while @maureendowd, @WillieGeist and others cheered. Richly deserved, pal, and the perfect way to remember Pete. pic.twitter.com/jPBXPpJMwo

Negga was unable to attend in person, as she is currently making her Broadway debut as Lady Macbeth in "Macbeth." Writer Colum McCann presented her award which she accepted through a pre-recorded video.

Taoiseach Micheál Martin praised the work of Glucksman Ireland House and paid tribute to the honorees via video from Dublin.

Maureen Dowd of The New York Times, MSNBC’s Willie Geist and Nicolle Wallace were in attendance along with leading scholars, faculty, and administration from Glucksman Ireland House and NYU, senior members of the Irish American community, and diplomatic representatives from Ireland and the U.K.

The evening concluded with a musical performance by the Joanie Madden Ensemble.