Irish American Antarctic explorer Colin O'Brady has responded to a recent National Geographic investigation which claims he may have exaggerated his expeditions. 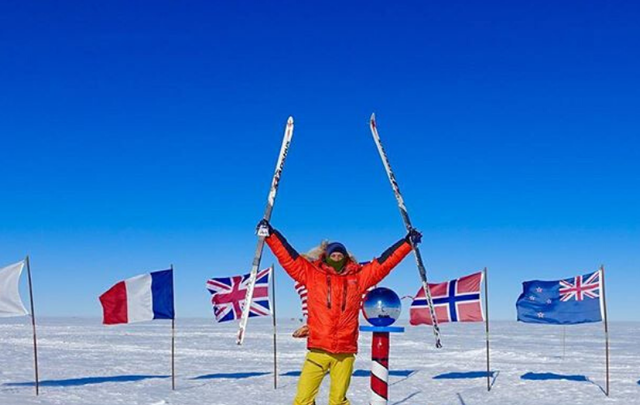 Colin O'Brady, an Irish-American man who became the first man to successfully cross Antarctica alone and unassisted, is facing claims that he exaggerated his feat and misled the public about some of the dangers he faced.

Irish American Antarctic explorer Colin O'Brady has issued a lengthy response after National Geographic published a piece on February 3 questioning the legitimacy of his expeditions.

Read More:  An Irish American has become the first person to cross Antarctica alone and unaided

In late 2018, O'Brady made headlines around the world when he successfully made the 932-mile crossing across the Antarctic region spanning 54 grueling days, beating Louis Rudd, a 49-year-old British explorer, by two days.

Both men pulled 300-pound sleds over the frozen continent and could accept absolutely no outside interference if they were to claim the record. Even accepting a cup of coffee from the South Pole research station would invalidate the record.

Almost a complete newcomer to polar exploration, O'Brady became something of a sensation and he has gone on to release a book documenting his achievement, 'The Impossible First.'

In his book, O'Brady claimed that he traversed one of the most dangerous areas on the planet where he was regularly lashed by winds of over 50mph and said that part of the map was "unreachable and inaccessible" for rescue aircraft because of the jagged terrain.

He said he was told by Antarctica Logistics and Expeditions (ALE) that if he asked for help at especially dangerous parts of his route, he wouldn't get it. O'Brady wrote that it was this particular danger that led many to believe that his feat was impossible.

However, in a piece published by National Geographic on February 3, leading antarctic explorers and experts are now claiming that O'Brady embellished many of his achievements in the pursuit of fame.

ALE categorically denies ever saying that they would not provide help to O'Brady, while leading Antarctic explorers say that the route was not "remotely impossible" to cross.

The route O'Brady used, for example, included a graded and flagged vehicle route frequently used by wealthy tourists and scientists exploring the area.

Eric Philips, an Australian Polar explorer who co-founded the International Polar Guides Association, said that O'Brady "didn't do what he advertised."

“This wasn’t some Last Great Polar Journey. Rather, it was a truncated route that was a first in only a very limited way," he said.

Explorers also point to Borge Ousland's crossing of the Antarctic in 1997 to discredit O'Brady's achievement.

A renowned Norwegian explorer, Ousland crossed a 1,864-mile stretch of the continent alone and, save for the use of a kite-like device on limited occasions, unassisted.

Many of the polar community do not regard Ousland's use of the kite to boost speed as assistance, instead choosing to see it as an "elegant innovation."

Then there is the matter that Ousland's crossing was almost exactly double the length of O'Brady's.

The Norwegian crossed between two ancient ice shelves - the Ronne and the Ross - and moved from one body of water to another.

Philips says that many explorers accept that a true crossing of the Antarctic must be from water to water.

“You just assume it's going to be from the outer edge of the white blob to the other edge," Philips said.

“To me, Antarctica is what you see on a satellite map,” he said.

O'Brady, on the other hand, seized on a new definition of the frozen continent which used the relatively small landmass underneath the 15,000 feet of frozen ice to define the parameters of Antarctica.

January 2016 at the South Pole. This photo was taken at the beginning of my Explorers Grand Slam expedition. Less than three years later, I’m looking forward to passing through there again! I’m 30 days into my journey to complete a solo, unsupported, unaided crossing of Antarctica. Yesterday I reached 87 degrees the final waypoint before turning my path directly toward the Pole. Today, I’m ~170 miles from the South Pole and making my way one step at a time! If you haven’t seen the Sunday @NYTimes article already, pick up a copy today. Top of the fold cover of Sunday Sports, the article features a day in the life rundown of what my hour-by-hour routine looks like as I cross Antarctica. @jennabesaw tells me there is a beautiful illustration of my IG photo update from Day 15. I can’t wait to see it; will someone save me a copy? 😉 Thanks again to @adamskolnick for reporting. Link in Bio. Check it out! And, be on the lookout for my regular evening IG update later today. https://www.nytimes.com/2018/11/29/sports/antarctica-ski-race.html

The ice expands well beyond the landmass beneath and the new definition effectively shrunk the size of the continent in half.

National Geographic said that the crossing O'Brady attempted was the most achievable crossing of the Antarctic ever attempted.

Englishman Henry Worsley died after attempting the new crossing in 2016. The experienced explorer contracted a deadly infection known as peritonitis and later did in hospital. O'Brady referenced Worsley's death in his book as proof of the perilous task he undertook, but he failed to mention that Worsley took on a longer and more dangerous route.

They say that the fact that he used the McMurdo-South Pole Highway - a 366-mile route used to haul supplied from the coast to the Amundsen-Scott Station at the South Pole - means that O'Brady's journey wasn't unassisted.

They argue that the smooth surface of the road, coupled with the fact that there are flagpoles with orange flags to assist navigation, enabled O'Brady to complete the journey far more quickly.

They contend that if O'Brady discounted Ousland's effort because he used a kite, then his journey should also be discounted.

“It more than doubles someone’s speed and negates the need for navigation,” Eric Philips said. “An expedition cannot be classed as unassisted if someone is skiing on a road.”

O'Brady offered a riposte to these criticisms and said that the ALE stipulated that he must use the highway if he was to undertake the challenge.

The ALE must approve all antarctic expeditions and they approve the route based on the basis of an explorer's experience.

Since O'Brady was virtually a novice Polar explorer, it makes sense that the ALE would send him towards the safest route which mitigates the dangers of crevasses by filling some of them and flagging the rest of them.

However, O'Brady barely mentions that he used the route in his book and doesn't mention that Worsley avoided it and took a far more perilous route. The ALE also denies ever telling him he must use that route and said that there were other routes available.

The fallout from O'Brady's disputed crossing has even led to a new set of standards to define crossing the Antarctic. Eric Philips established the Polar Expeditions Classifications Scheme and, by its definition, O'Brady's route would not be considered a full crossing, nor would it be classified as unassisted.

Having said that, for a novice explorer, O'Brady's achievement is still remarkable. He managed to cross almost 1,000 miles in extremely harsh conditions with barely any experience to his name. Question marks will remain, however, over how impressive that achievement was.

On February 13, O'Brady issued a 16-page letter to Susan Goldberg, the Editor in Chief at National Geographic, requesting that the piece which questioned his accomplishments be retracted.

O'Brady wrote: "The article is widely inaccurate. It misrepresents a historic polar
expedition by omitting key facts and fails to contextualize a number of items. My route and methods were announced publicly and were acknowledged as valid by polar experts and polar authorities who define the classification definitions of expeditions of this nature. The expedition was conducted with the utmost transparency as it was tracked on live GPS for anyone to observe in real time. It was followed very closely by reporters of the New York Times and other
major media outlets who did their own fact-checking, none of whom found anything controversial with my crossing or route while it occurred.

"The article delivers a false and misleading narrative, critiquing the expedition as not an “unassisted” crossing, and thus not a valid “first.” It claims that I “exaggerated” the dangers I faced during my expeditions. In addition, the article asserts that I do not recognize or credit Borge Ousland, one of the great Antarctic explorers, for his 1996-97 renowned crossing. All of these assertions are demonstrably incorrect."

Who do you think is right here - O'Brady or National Geographic? Let us know in the comments