On December 26, Colin O'Brady crossed the finish line on the Ross Shelf, finishing up his 932-mile expedition with an almost 80-mile ultramarathon. 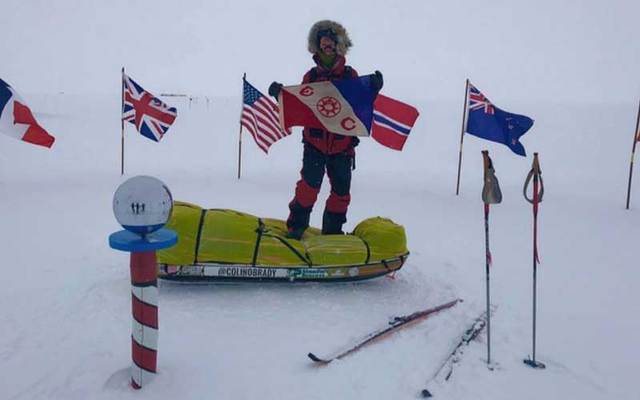 An Irish American adventurer has crossed Antartica, the first person to do so alone and unaided.

Only two other men have attempted the challenge before, both in the past two years. One of the men quit after 52 days, and the other died.

Rudd, a 33-year veteran and current captain of the British Army, has been on previous expeditions to Antarctica, having already skied more than 2,500 miles. In 2016, he led a five-man team of British veterans across the continent.

In October, O’Brady, a newcomer to the polar adventure community, declared his intention to attempt the crossing.

Day 14: THE FIRST WAYPOINT!! It may not seem like much, but the smile on my face says it all. I reached the first waypoint today and changed my compass bearing 30 degrees west. My poles pointing out the turn. Although no one has completed this full traverse, I have GPS waypoints from other people who have done sections of this route and satellite images that give me some sense of major crevasse danger to avoid. When I got dropped off on day one, this first waypoint seemed impossibly far, almost 200 miles. But this morning, I reached it. It’s just a latitude and longitude coordinate, so it’s not as if there was anything to see, but I celebrated my win of the day with a shout, and changed my compass bearing. Also as you can see here, I skied if just a base layer today. It was a balmy -20 degrees out with no wind. As you can work up quite a sweat pulling around 300 lbs and sweat is to be avoided at all costs, I’m down to base layers! The famous saying out here goes “you sweat, you die!” The second you stop the sweat freezes to your body and you’ll go hypothermic. No sweat for me today, just skiing along in my base layers. #TheImpossibleFirst #BePossible

O’Brady is no stranger to overcoming hardship and challenges.

After a near-death accident burned his legs and feet in 2008, he was told he might never walk again. Eighteen months later, he won the amateur division of the Chicago Triathlon and spent the following six years as a professional triathlete, including as a member of Team USA.

A social-media savvy self-promoter, O’Brady posts daily updates from the Antarctica expedition to his 66,000 Instagram followers.

Both men were in the race are raising funds for charities — Rudd for veterans and O’Brady for children’s health.

The men met for the first time in late October while making preparations for their expeditions in Punta Arenas, Chile. On November 3, a Twin Otter ski plane deposited them a mile apart on the Ronne Ice Shelf, a few miles out from the beginning of the Antarctic continent.

Rudd was in front for the first five days, but on day six, newcomer O’Brady caught up. After the men had a brief chat, Rudd explained he let his competitor pass because he was, “Very keen to maximize the solo experience... and kept about a kilometer apart throughout the day.”

After a long 18-mile day pushing each other, Rudd decided to give up trying to keep O’Brady insight, explaining in his day’s report, “There’s still a long, long way to go and a lot can happen yet, so I’m going to stay focused on my plan. Hopefully, we’ll naturally separate, it’d be better I think to be out here on our own experiencing the solo journey as it should be.”

When Rudd came out of his tent on the morning of the seventh day, he found O’Brady had already left. Rudd reported, “ It’s actually a good thing for both of us—we want to do be doing our own separate solo journeys...Now I can just focus on my expedition, my journey, and kind of do it my way. That’s what I came here for.”

Day 42: DREAMS INTO REALITY. Even though I’m 50 miles past the South Pole now, I can’t help but post one more image from the day I arrived - a dream come true. Plus, today is a very historic date. On December 14, 1911, this day exactly 107 years ago, Amundsen became the first person to reach the South Pole. Talk about inspiration. That was a true journey into the unknown that took years and years to complete. I finished a bike ride in 2016 and got the spark of inspiration for this project. I immediately came home and wrote it all down on my whiteboard. Since that day I’ve been working everyday to turn this dream into reality; training, fundraising, researching. The key is that each day I took a step toward making my dream a reality even with countless setbacks and mistakes made along the way, I kept trying. I haven’t realized the dream yet. That’s what I’m doing every day out here...taking step after step to make it come true. Whatever you are dreaming of in life, be that in business, art, music, love, entrepreneurship, sports - it can be anything. Stop just dreaming and take the first step. As in the immortal words of Walt Disney, “If you can dream it, you can do it!!” But dreaming alone won’t get you there. If it’s going to work, action is required. #TheImpossibleFirst #BePossible Shoutout to @samuel.a.harrison for snapping this amazing shot of me. Samuel and another scientist from the South Pole station read about my journey in the @nytimes and came outside to the Pole to cheer me on!

On day 40, O’Brady posted a photo at the red and white striped marker that officially designated the South Pole.

When he finally reached the end, he ended his 932-mile expedition with an 82-mile ultra marathon and even picked up speed as he raced toward the finish line ahead of schedule. He reached the finish line on the Ross Shelf on December 26. Rud was still 73 miles from the finishing line at the time.

Before his expedition, O’Brady declared: “This project is for anyone who has ever been told their dreams are impossible.”

Read More: Why has Ireland not yet honored its greatest Antarctic Hero?