Caroline Kennedy nominated by Biden to become Ambassador to Australia

Caroline Kennedy says that if confirmed as Ambassador to Australia, she looks forward to sharing "with them what I love most about America." 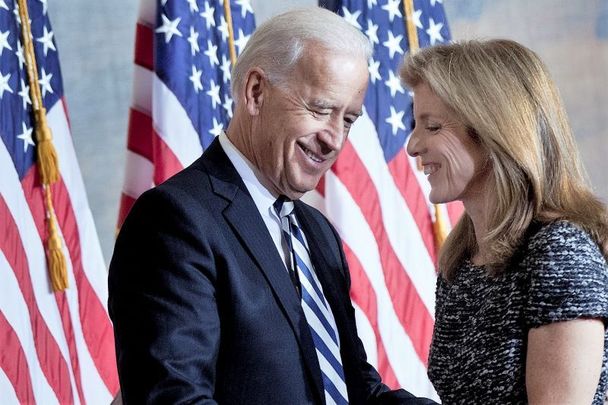 January 20, 2011: Caroline Kennedy thanks Vice President Joseph Biden after he spoke during an event to honor her father's inauguration on Capitol Hill in Washington, DC. Getty Images

Kennedy, who previously served as the US Ambassador to Japan from 2013-2017, was one of several nominations announced by the White House on December 15.

It was speculated for some time that Kennedy would land an ambassadorial nomination, especially after her early endorsement of Biden in February 2020.

Kennedy's nomination will now be considered in the US Senate before she is confirmed as the Ambassador Extraordinary and Plenipotentiary to the Commonwealth of Australia. The post has been vacant since Arthur B. Culvahouse Jr. exited in January 2021.

Announcing the nominations, The White House said in a statement on Wednesday that Kennedy "played a critical role in the commemoration of the 70th anniversary of the end of World War II culminating in the historic visits of President Obama to Hiroshima and Prime Minister Abe to Pearl Harbor. She advanced the realignment of U.S. Forces in Okinawa, promoted women’s empowerment in Japan, and increased student exchange between the U.S and Japan.

"In 2017, she founded the International Poetry Exchange Project to virtually connect students in Japan, Korea, the Philippines, and the Bronx through the power of the spoken word. In November 2021, she was awarded the Grand Cordon of the Rising Sun, the highest honor for which foreigners are eligible, for her efforts to strengthen the US-Japan alliance.

“Prior to her time in Japan, Kennedy was at the forefront of education reform efforts in New York City, creating public-private partnerships to promote arts education, school libraries, and performing arts spaces. She served as the CEO of the Office of Strategic Partnerships at the NYC Department of Education from 2002-2004, Vice-Chair of the Fund for Public Schools from 2002-2010, and served on the Board of New Visions for Public Schools.

“An attorney and author, Kennedy has published 11 New York Times best-selling books on law, civics, and poetry and serves as the Honorary President of the John F. Kennedy Library Foundation. She is a Director of the Carnegie Corporation and a member of the Board of Advisors of the International Rescue Committee.”

Responding to her nomination, Kennedy said in a statement: “If confirmed, I will work hard to repay this debt.

“I look forward to collaborating with the Government of Australia to strengthen our alliance, improve global health and increase vaccine access during this terrible pandemic, and to address the urgent climate crisis.

“I am excited to get to know the Australian people, learn about their fascinating country and share with them what I love most about America.”

Kennedy’s nomination was warmly welcomed by Australia’s Minister for Foreign Affairs, Senator Marise Payne, who said in a statement on Thursday: “Ms. Kennedy has a distinguished career in law, the arts, education, and philanthropy.

“If confirmed by the United States Senate, she would bring deep political networks in Washington and a keen understanding of our Indo-Pacific region, including from her time as US Ambassador to Japan. She would be the second woman to serve in the role.

“Ms. Kennedy’s nomination comes as we mark and celebrate the 70th year of the ANZUS Treaty. Our Alliance has never been more central to the interests of both countries.

“As US Secretary of State Antony Blinken and I discussed last week in Liverpool, we look forward to having a Senate-confirmed Ambassador in place in Canberra in light of the scope and scale of the shared challenges we face.

“We acknowledge and thank Chargé d’Affaires Mike Goldman for his ongoing engagement.”