Ireland's Budget 2022 "sets the course" for a better year next year and beyond, Minister for Finance Paschal Donohoe said. 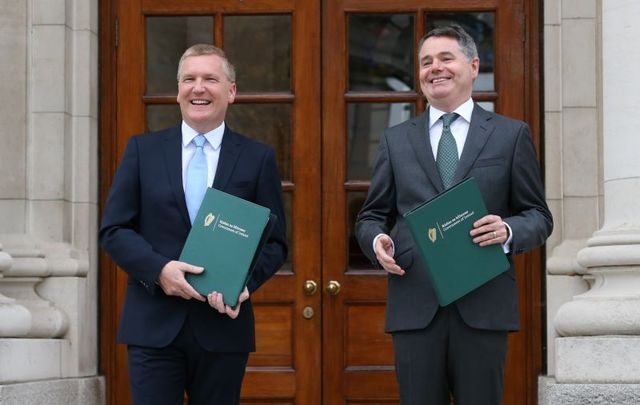 Budget ministers Paschal Donohoe and Michael McGrath on Tuesday praised the heroes of the pandemic and pledged a better Ireland is within reach as they delivered details of a €4.7 billion budget package.

Finance Minister Donohoe ended his Dáil speech by paying tribute to the “heroes of the Covid pandemic both seen and unseen.”

He said, “For those whose jobs have not returned, let me again reiterate that this government stands with you. For those concerned about the rising cost of living, this budget will help you.

“A good journey to a better Ireland is within our grasp for 2022 and beyond. Budget 2022 sets the course for that journey.”

As the dark cloud of #COVID19 lifts, there are truly exciting times ahead for this country & its people pic.twitter.com/T4p37arvmj

Expenditure and Reform Minister McGrath opened his delivery also with praise for the “extraordinary efforts” of the Irish people during Covid-19.

This #Budget22 by @mmcgrathtd is about improving the quality of life right across the country.

We are doing this by improving access to housing, healthcare, childcare, and through the largest capital investment programme in history. pic.twitter.com/L8ViHhNC6b

Some €3.2 billion of the budget package is committed to existing pay and spending increases, while €1 billion will be available for new initiatives and €500 million allocated for tax measures.

Taoiseach Micheál Martin said the budget will be about getting back to normal after the pandemic and helping people with the cost of childcare and accessing healthcare. But he advised rewarding front-line workers will be delayed to another day because the government is currently in discussion with social partners on the issue.

#Budget2022 will create jobs, help families, children, workers and the most vulnerable of all ages as we emerge from the pandemic.

It prioritises those most in need as our economy bounces back; with childcare, with housing, and with the everyday cost of living.

Tanaiste Leo Varadkar said there will be a “lot of help with the cost of living” through small individual measures which were “not insignificant” when added together.

Among them, according to speeches from Donohoe and McGrath, are an extra €5 a week for pensioners, a weekly fuel allowance increase under the welfare system of €5, and a €3 increase in the allowance for those living alone.

That means an extra €13 a week for pensioners receiving all three payments, bringing their payments up to €308 a week from the New Year.

There will be a 100 percent increase of the Christmas bonus for welfare recipients to help them celebrate the festive season in 2021.

Following the rise of many working from home during the pandemic, there will be an income tax deduction amounting to 30 percent of the cost of vouched expenses for heat, electricity, and broadband while working from home.

Tax on cigarettes will go up 50 cent bringing the average price of a pack of 20 to €15 in a targeted bid to reduce smoking in Ireland.

In what Donohoe called “the core challenge facing the country over the next number of years” – shortage of homes – the government is introducing a “zoned land tax” to encourage the use of land for building homes.

The government expects its measures to create an extra 400,000 jobs in the economy during this year and next year.

Donohoe also pledged to assist the aviation industry with amended tax arrangements in the forthcoming Finance Bill. He said the sector “paid a particularly heavy price” during the pandemic.

The reduced VAT rate of nine percent for the hospitality industry will remain in place until August 2022.

Critics of the budget included Active Retirement Ireland. Its CEO Maureen Kavanagh said the €5 a week increase for pensioners was inadequate to cover the rising costs of food, energy, and other goods.

Sinn Féin's finance spokesperson Pearse Doherty told the Dáil that the budget was a disappointment for renters, and aspiring buyers.

He added, “The housing crisis can be fixed but only with a government with the ideas.”

#Budget2022: Never has a government spent so much to achieve so little!

This is a budget with no answers to the big questions in housing, health and the cost of living. - @PearseDoherty #Buiséad2022 pic.twitter.com/ojfa9gZ27K