Thousands of mica and pyrite homeowners again descended upon Dublin on Friday, October 8 to demand 100% Redress, No Less from the Irish government. 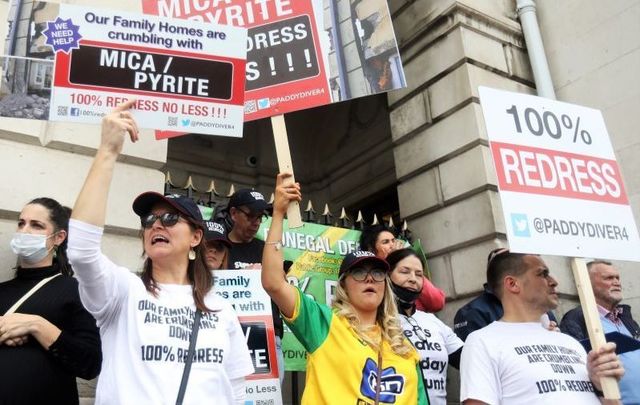 Friday's gathering is being hailed as a "fantastic success" with an estimated 20 - 25 thousand people from all over Ireland in Dublin for the demonstration.

"We feel we have made 100% Redress an inevitability," one organizer told IrishCentral on Friday night.

It emerged several years ago that the mineral muscovite mica was present in concrete blocks used to build a large number of properties, primarily in Donegal in the northwest of Ireland, but also in other counties.

The substance affects the cohesion of the cement, impacting the durability of walls and damaging the structural integrity of a significant number of properties. Many relatively new homes built with the materials are now crumbling, with some having been condemned.

Protesters, however, are steadfast in demanding 100% Redress, No Less.

Friday’s protest also came not long after Ireland's Department of Housing published its Report from the Working Group on the Defective Concrete Blocks Grant Scheme, which the Mica Action Group has signaled it will not support.

“We should not have had a protest today,” the Mica Redress group said on Twitter late in the day on Friday:

We should not have had protest today...

But by god everyone in Dublin today should hold their head high. Today was a brilliant show of resolve, passion and fight✊

While our blocks may be weak, the community spirt in Donegal has never been stronger💪#micaProtest #micaredress pic.twitter.com/aYusEO1wmz

Donegal man Paddy Diver, who is at the forefront of the push to get full redress from the Irish government, was on hand on Friday afternoon in Dublin as busloads of people made their way to the capital city.

Addressing the massive crowds, Diver said: “This here can never, ever happen again.”

The power of the people is greater than the people in power ✊#MicaRedress #MicaProtest pic.twitter.com/vuNA2b4O7w

Diver went on to warn politicians that if homeowners' demands are not met, “Don’t darken our doors ever again boys. That’s the bottom line.”

Several Irish politicians joined the rally on Friday in solidarity.

So proud of the people of Donegal here who have turned out in their thousands. Sinn Féin stands shoulder to shoulder with the mica family’s in demanding 100% redress. #mica #100%redress pic.twitter.com/11dCr6rL5E

A privilege to stand before such a large gathering of united communities.

The Government has failed Mica families, giving campaigners every reason to be low in spirits. Yet, in their thousands they gather, determined as ever to fight for justice!#MicaProtest #MicaRedress pic.twitter.com/IUZNHBrFB2