The Mica Action Group is organizing “a major protest for 100% Redress, No Less for Mica and Pyrite affected families" this Friday, October 8 at 12 pm in Dublin. 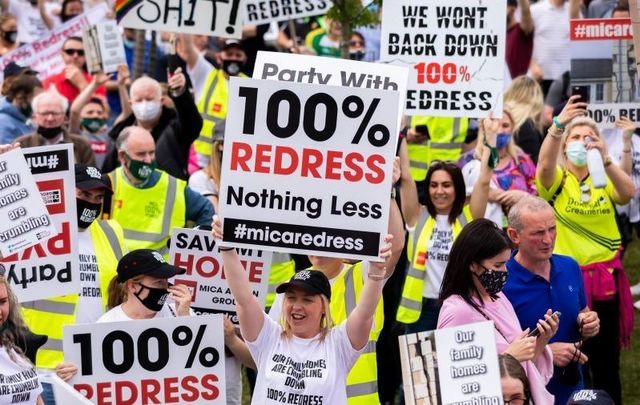 The Mica Action Group, consisting of homeowners in Co Donegal whose homes are crumbling after being built with mica and pyrite, is staging Friday's protest as it continues its fight to obtain 100% Redress, No Less from the Irish government.

The protest scheduled for this Friday, October 8 at 12 pm in Dublin comes after Ireland's Department of Housing published its Report from the Working Group on the Defective Concrete Blocks Grant Scheme, which the Mica Action Group has signaled it will not support.

Get planning now, you have 5 days - we need your feet on the streets of Dublin.

Organizers of Friday's protest, which will begin at Parnell Square and head for Leinster House, issued a formal invitation via email on October 1 which was addressed in part to scores of Irish politicians.

The emailed invite says: “This is the most significant grassroots movement to emerge from Rural Ireland since the Land League, and we want every part of Ireland to feel and be part of it."

It adds: “With the vast majority of TDs and Senators inside and outside of government supporting our demands for 100% Redress, No Less, this is a moment of reckoning for how Governance is actually done now and into the future of this island."

Organizers are encouraging businesses to give their employees the day off to attend the event on Friday, noting that "this day is much more important than any future Bank Holiday, this is Mica D-day."

The invite adds: “We need to think with both hemispheres of our Irish brains and remember that Irish America, our friends in the UK, Europe and across the world are watching on and wishing us well, the world is in our corner as we duke it out with the civil servants in the final rounds of this long fight."

The formal invite was issued the day after Ireland's Department of Housing published its Report from the Working Group on the Defective Concrete Blocks Grant Scheme.

Responding to the report, Eileen Doherty, a representative of the Mica Action Group, told RTE: "It would seem they aren't going to recommend 100% so we would absolutely not support that.

"If this is a document presented to Government in order for them to make an informed decision on this critical issue it is lacking a reflection from the homeowners themselves ... of the huge amount of work they have put in over recent months.

"We must see 100% delivered for all remediation options."