Bon Jovi made the erroneous claim about Bono and the Orangemen while speaking on Dax Shepard's 'Armchair Expert' podcast. 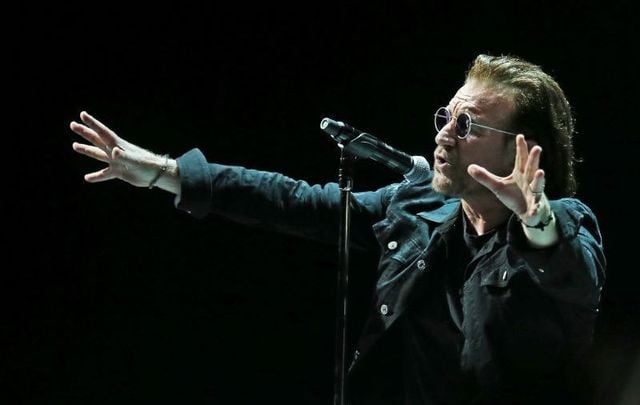 November 5, 2018: Bono and U2 in the 3 Arena in Dublin for the first of four performance of their eXPERIENCE + iNNOCENCE shows. RollingNews.ie

Irish people on Twitter were quick to respond to Jon Bon Jovi's bizarrely comparing his upbringing to Bono's in Dublin.

Jon Bon Jovi, the frontman for the New Jersey-based rock group Bon Jovi, made a serious gaffe when comparing himself to U2 rocker Bono while speaking on the October 5 episode of the "Armchair Expert" podcast, hosted by Dax Shepard.

When discussing the new Bon Jovi album ‘2020,’ which Bon Jovi says he tweaked in the wake of COVID, the death of Black man George Floyd, and discussions of white privilege, host Dax Shepard asked him how he approached making more politically-inspired music.

Bon Jovi, who noted that when he was younger, he was more focused on just entertaining people, responded: “You know I would often bring up an example. So Bono is probably right at my age, he’s a couple of months older, I think.

"His upbringing was obviously very different than mine. I never had the Orangemen walking through my neighborhood saying, you know, 'get the Catholic kid and beat him up.'

“I didn’t have any of that kind of turmoil in suburban New Jersey, when you had a wonderful middle-class upbringing with two hard-working parents.

“So of course you were writing the happy anthemic song.”

Bon Jovi added: “I was aware of the world around me, but I chose not to get involved, and I don’t blame myself - I was 21 years old and that’s all I had to live for.”

The Belfast Telegraph notes that Bono, who was born and raised in Dublin, was brought up in an interfaith household - his mother belonged to the Church of Ireland, while his father was Catholic.

'Orangemen' refer to members of the Orange Order, the unionist, Protestant fraternal order based in Northern Ireland. It's named in recognition of William of Orange, the Protestant Dutchman who seized the throne of Catholic King James II back in 1688.

Having grown up in Finglas, in the Republic of Ireland, Bono would not have been subject to "Orangemen walking through [his] neighborhood saying, you know, 'get the Catholic kid and beat him up.'"

Over on Twitter, there were lots of reactions from Irish people:

I'd say the nearest Bono ever came to an Orangeman was when he met Take That at the BRIT Awards. https://t.co/hSakmOHxEY

Bono tells Jon Bon Jovi about his oppression at the hands of the Orangemen. pic.twitter.com/jzG1jcOlSy

The only orange man Bono got close to was at the pelican crossing on Stephen’s Green. https://t.co/jxZIIuW5KX

Relieved I grew up in #Inchicore and was spared #Bono's experience of the Orange Order rampages through Glasnevin and Finglas in the 70s. So glad too that Jon Bon Jovi is finally highlighting this forgotten episode of modern Irish history. #livinonaprayer pic.twitter.com/wvJ1pN3YLH