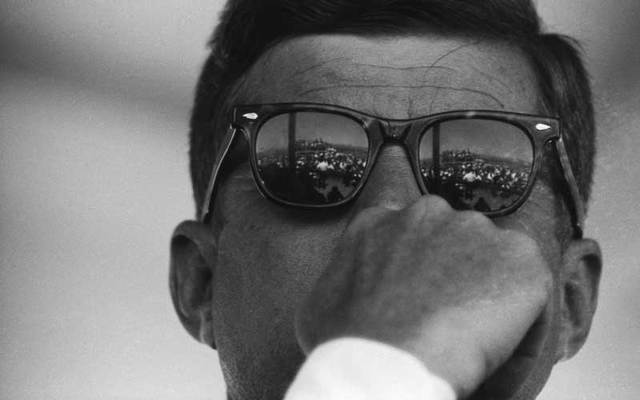 The cover for Bon Jovi’s new album “2020” was inspired by a photo of President John F. Kennedy.

The album cover features Jon Bon Jovi wearing sunglasses and looking pensive, with his fist on his chin. The black-and-white image was captured by New York City-based photographer Clay McBride.

Read More: Photos of JFK and Jackie Kennedy “wedding of the century”

The look was inspired by a photo of President John F. Kennedy taken in 1962, the frontman revealed on the band’s website last week.

“It pictures the president reflecting both literally and figuratively upon a crowd in California. I saw this photo and wondered what the president was thinking. Since there are so many socially conscious songs on the record and my admiration of the photo of JFK, I asked photographer Clay McBride to capture it as the cover of ‘Bon Jovi 2020.’”

He said the new album will have more “socially conscious” themes, touching on gun control, veterans’ issues, politics, family, and much more.

“It encompasses life, love, and loss,” Bon Jovi said in a statement.

Singles “Unbroken” and “Limitless” have already been released.

The entire “2020” album will be released on May 15 and is available for pre-order.

The band will go on tour in the U.S. this summer. The 18-date Bon Jovi 2020 Tour starts on June 10 in Tacoma, Washington, and will end with shows July 27 and 28 at Madison Square Garden in New York City.