Ireland's loss will be America's gain as Irish youths may be forced, once again, to leave Irish shores during economic depression. 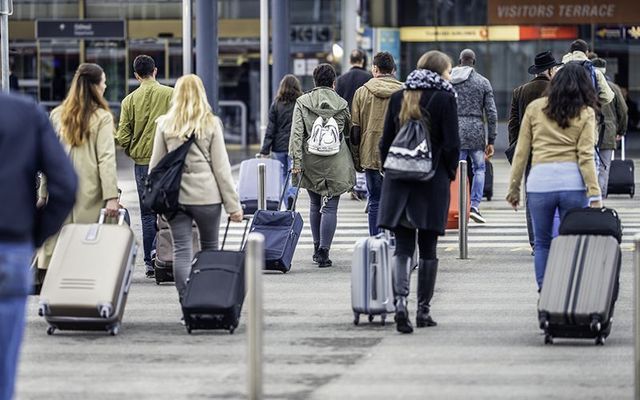 Thousands of young people here who will be forced into a new wave of emigration in the coming months and years. Getty

More young Irish will be heading for the US in the next few years in a new wave of emigration.

It happened in the early 1980s when our economy was stagnant and unemployment soared.  It happened again in the years after the property crash in 2008 when we had the IMF bailout and austerity cutbacks and the economic collapse meant there were few jobs for young people.

It's now about to happen again -- third time unlucky -- and it could go on for several years. It will be more difficult this time for the young Irish who will emigrate because traditional destinations like the U.S., the U.K., and Australia will all be in economic survival mode.

It will be particularly difficult for those who head for America because of the determination there to control immigration. But that's not going to stop them.  The Irish will find a way, as they always have done.

The reason another wave of Irish emigration to the U.S. is virtually certain is that we are facing into a deep recession here thanks to COVID, one that could go on for a number of years after the pandemic eases off or even ends.

Read more: Coronavirus is not over, but you don't have to fight it alone

You may have seen the grim forecast last week from the Economic and Social Research Institute (ESRI), the leading think tank in Ireland, which predicted that we face an enormous challenge.  Even the most benign of the scenarios they considered predicted large scale job losses, collapsing revenues, soaring budget deficits, massive state borrowing, and cutbacks in state spending as we are forced to rebalance.

It's not just us, of course.  All countries face major challenges due to the COVID crisis.

The reality for Ireland, however, is that we are in a uniquely difficult position.  Our open economy is dependent on international trade, which has already contracted and maybe heavily impacted for years to come.

That will have a disproportionate effect here. Even if we had no lockdown, the dramatic slowdown in the global economy will destroy many jobs in Ireland in the coming months and years.

Unemployment here last month reached around 30 percent, and that does not include the half-million people whose jobs were being preserved by the wage subsidy scheme for businesses that are closed.  Even after we fully come out of the COVID shutdown at the end of August -- all going well --unemployment is likely to remain at a very high level, possibly approaching 20 percent.

As if COVID was not enough, we also have Brexit to fear and we are more at risk from that than any other country in Europe.   There is now an increasing likelihood of a hard Brexit at the end of this year when the U.K. reaches the end of the transition period during which a trade deal with the EU was supposed to be negotiated.

There has been little progress in the talks because the U.K. is making impossible demands.  They want free access to the EU market without having to accept EU standards for food, labor, the environment, etc.

To put it simply, they want to have their cake and eat it.  Time is running out for the talks, and British Prime Minister Boris Johnson says there will be no extension (if there is to be an extension at the end of this year it must be arranged this month and the U.K. has no desire to do so).

Read more: COVID-19 money is free, so why work?

Johnson could be bluffing, of course, but the government here does not seem to think so. Last week it ordered the various departments to begin making contingency plans for a U.K. crash out at the end of this year.

This would wreak further devastation on the Irish economy, especially in our agri-food export sector.   Many small firms here that depend on the U.K. market would also be badly hit.  If it does happen in the wake of COVID it would be a catastrophic double whammy for the Irish economy, the worst-case scenario for us.

The most vulnerable section of our population in all of this will be our young people.  Many older people on the state payroll and those who work for big companies will probably be okay.   But many young people here work for small companies who will struggle in the months ahead.

They work in hospitality, in hotels, bars, restaurants, cafes and the wider tourism sector.   And many work in retail, usually on not much more than minimum wage.

The prospect for all these jobs even when the lockdown is fully lifted is grim because of the ongoing fallout.  The changes and the resulting decline in the hospitality, retail, tourism, travel, and other sectors will be long-lasting or even permanent and the loss in jobs will be extensive.

Over a million people in Ireland work in small and medium-sized businesses, many in the vulnerable categories.  Some economists have predicted that at least a quarter of our small businesses will not survive, which means tens of thousands of people losing their jobs, many of them young people.

The most pessimistic projections suggest that a quarter of a million people could become unemployed.  On top of that many of the 300,000 self-employed people here -- the cleaners, gardeners, plumbers, electricians, etc. -- will find they have fewer customers because people are reluctant to have outsiders in their homes.

None of this has really sunk in here yet, thanks to the glorious weather we have had for the past few weeks and because people have money in their pockets due to the generous income support schemes being provided by the state.

With most businesses closed and no jobs to go to, people have been crowding to the beaches to enjoy the sunshine.  It's like an early and prolonged summer holiday.

There is a general feeling that the worst is over, helped by the fact that our COVID numbers, both for deaths and new cases, continue to be low.

The underlying reality is very different.  There is a real danger of a second wave here if people get careless and relax into what used to be normal behavior.

And it's the same with the economy -- there is still a long way to go before the lockdown can be fully lifted and businesses can be fully open again.   Much like the virus, the damage that is being done to the economy is invisible. But it is coming down the tracks nonetheless.

It's not just people in general here who are floating along in this bubble of unreality at the moment.  Our politicians seem to be doing the same, although they must know that the present largesse of free state money cannot continue for much longer and the day of reckoning is approaching.

It's true that we can borrow vast amounts of money at present at historically low-interest rates, but that may not continue.  Unless the markets are convinced we can repay loans, the rates will increase.  And as the Minister for Finance Paschal Donohoe pointed out recently, we already have such a huge debt mountain that even a small increase in the rates we pay would put us in a very difficult position.

What this means is that the state must be very careful about how we spend the billions we will be borrowing in the coming years.   We will need money to support welfare for the unemployed, of course, but we cannot go on giving out the present pandemic payments of €350 euro a week to everyone who applies.

We will need money to support business and preserve jobs, but the reality is that not all businesses can be saved.  Hard decisions lie ahead.

Complicating this here at the moment and adding to the air of unreality are the ongoing talks between three parties to try to form the next government.   Fine Gael, Fianna Fail, and the Green Party are all discussing how they will spend billions to rebuild the economy, improve services, sort out the climate and so on in a program for government.

What is noticeable about these talks so far is that they are all about spend, spend, spend, and very little about the cutbacks that are going to be necessary.   The obvious things that will need to be done to save money, like increasing the pension age to 67 from next year -- something that was agreed by the Dail a decade ago -- are proving difficult.

Even worse was the announcement last week by Donohoe that the government intended to give 300,000 state workers a two percent pay increase later this year.  This is the final stage in the so-called pay restoration program to give back the cuts that were made in state pay following the financial crash a decade ago.

The problem is we can't afford it because we are facing a massive €30 billion euro budget deficit this year.   Added to that is the reality that average state pay here is already among the highest in Europe and is almost 40 percent higher than the average private-sector pay here.

At the very least state workers should be asked to wait for another few years before there is more pay "restoration."  But our politicians prefer to float along in this bubble of unreality than face down the public sector unions -- and Fine Gael is clearly thinking about all the votes that are at stake if there is a snap election in the next few months after a failure to form a government.

None of this will be any help to the thousands of young people here who will be forced into a new wave of emigration in the coming months and years.  As ever, our loss will be America's gain.