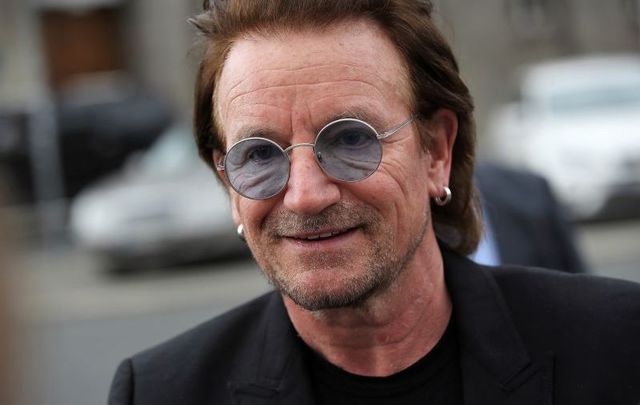 Bono, born Paul David Hewson, was born on May 10, 1960, in Dublin. He joined U2 while he was still in secondary school (high school) but it was the band's sixth album, The Joshua Tree, that made the Irish men international stars.

Happy Birthday, Bono! Bono, born Paul David Hewson, turns 58 today. To mark the occasion, IrishCentral have put together a list of our favorite U2 tracks. Check them out here: http://bit.ly/2wuWoQ4

Over the years, Bono has used his celebrity status to bring the world’s attention to problems such as world poverty and AIDS. In 2005, he was named “Person of the Year” by TIME magazine, and in 2007, Queen Elizabeth II made him an honorary knight for his service.

Aside from his charitable works, Bono remains the frontman of U2. The Irish rock legends have been rocking out and filling arenas since they formed in 1976. Arguably the most successful and popular music act around these days, the band has released 12 studio albums and sold more than 150 million albums worldwide.

Where the Streets Have No Name

This iconic song that opens the 'Joshua Tree' album has a bombast that is matched by few other songs. The Edge felt he had come up with “the most amazing guitar part and song of (his) life.” The third single off the seminal album climbed all the way up to number 13 on the US charts and number 4 in the UK. The tune is probably best known for its video of the band performing the song live on a Los Angeles rooftop before being stopped by the police.

Arguably one of the best rock ballads ever written, “One” was released as the third track off of "Achtung Baby" in March 1992. At that point in time, the band members were at odds with each other, coming very close to the brink due to differences over the sound and quality of the recordings. This song unified the band and made them one again. “One” reached #10 on the Billboard Hot 100 Chart and #1 on Us Billboard Modern Rock Tracks Chart.

(Pride) In the Name of Love

This song vaulted the band to commercial success in the US as the group’s first Top 40 hit in the states. Written about the legacy of Dr. Martin Luther King Jr., the tune was the lead single off of 1984’s "The Unforgettable Fire." Bono was actually dissatisfied with the lyrics calling them “simple sketches.” This may lend to the song’s universal appeal, however.

I Still Haven’t Found What I’m Looking For

This gospel-leaning hit was released in May 1987 and was the second consecutive single from 'The Joshua Tree' to rise to number one on the US Billboard Hot 100 chart. The song is a highlight of the group’s live shows as witnessed in the band’s rock film 'Rattle and Hum' where Bono soulfully croons accompanied by a full-fledged gospel choir.

The controversial song conveyed the band's aversion to the Troubles in Northern Ireland as well as senseless violence and killing around the world. The band was not glorifying violence of any kind in the region. It is widely considered one of the world’s best political protest songs.  Released in March 1983 as the third single off the album 'War,' the song helped the band reach a wider listening audience.

The fourth single from 'All That You Can’t Leave Behind' was released in November of 2001. It was written about the Burmese politician and activist Aung San Suu Kyi but took on a new meaning and purpose in light of the September 2001 terrorist attack on New York City. It brought a ray of hope amidst the darkness of the time.

With or Without You

The band’s first number one hit single in America from 'The Joshua Tree,' 'With or Without You' topped the Billboard Hot 100 for three weeks straight in 1987. Written by Bono, the gorgeous love song explores the balance in his life between being a musician and a domestic man. 'With or Without You' made the cut as the number one song on Rolling Stone’s list of “100 Greatest Pop Songs” and is the group’s second-most covered song.

Even Better Than the Real Thing

Off the experimental and electro 'Achtung Baby,' it was released as the fourth single in June 1992. It evolved from a demo entitled 'Real Thing.' Bono describes the hit as "(being) reflective of the times [the band] were living in, when people were no longer looking for the truth, [they] were all looking for instant gratification." This became a theme of the band throughout the 90s.

This song was heavily influenced by Sinatra and was even entitled 'Sinatra' while in its working stages. The band completed 'Stay' when German director Wim Wenders was looking for a song for his new movie 'Faraway, So Close!'  Bono has said the song was one of his personal favorites by U2 and perhaps the most underrated. It was released as the album’s third single from 'Zooropa' in November 1993. The beautiful music video was shot by Wenders himself and features the movie’s hallmark of angels falling to earth.

One of U2’s biggest hits helped launch the album 'All That You Can’t Leave Behind' to multi-platinum status. The Edge went back to his 80s guitar sound on this album that was a topic of controversy among the band members. The song, described by Bono as being about losing everything but still finding joy in what you have, won Grammy Awards for Song of the Year, Record of the Year, and Best Rock Performance by a Duo or Group with Vocals.

What's your favorite Bono song? Let us know in the comments!