US President Joe Biden spoke about his own Irish roots and the enduring connections between Ireland and America during his address at the Ireland Funds Gala in Washington, DC on March 16. 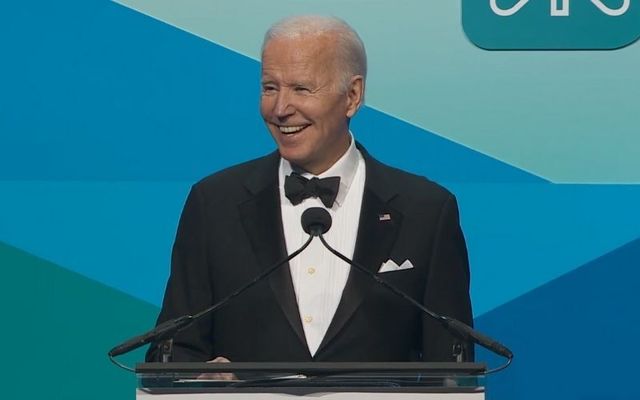 Ireland's Taoiseach Micheál Martin was in attendance at the 800-person, sold-out event but had to leave early when a precautionary COVID-19 test he had taken came back positive.

In his remarks, President Biden, who was welcomed with an enthusiastic round of applause, addressed the Taoiseach; the two met previously when Biden was Vice President during the Obama administration and Martin was Ireland’s Minister for Foreign Affairs.

“I look forward to continuing our friendship and discussing our partnership tomorrow at the White House when we both have come full circle,” the President said.

“You’re Taoiseach and I’m President; what the hell are we going to do?” Biden quipped, which was met with laughter in the audience. "It’s pretty personal for me."

Biden then touched upon his own Irish roots: “It’s been 165 years since my great-great-grandparents left County Mayo and County Louth aboard coffin ships to cross the Atlantic. Not sure all what — they knew what they were leaving. They weren’t sure what they were going to be seeing.

“The Blewitts and the Finnegans eventually settled in Scranton, Pennsylvania. That’s where my parents met and were married. It was where my mother, Catherine Eugenia Finnegan Biden, was born and later met — married my father, Joseph R. Biden, Sr. He had the saving grace, on his mother’s side, of having a Hanafee from Galway. That’s the only thing that saved him. And you all think I’m kidding. I’m not.

“And it was in Scranton where I was born, and I inherited my mother’s side of the family’s overwhelming pride — overwhelming pride in being Irish — a pride that spoke to both continents’ heart and soul, and drew from the old and the new.”

Biden later shared an anecdote from when former Taoiseach Enda Kenny visited the White House for St. Patrick’s Day: “As a matter of fact, Taoiseach, when I was Vice President, I hosted one of your predecessors, Enda Kenny, who I got to know in the Naval Observatory. I’d always have a St. Patrick’s Day breakfast.

“And Barack said, ‘Get the hell home to Ireland.’”

Later, Biden invoked the words of the late Irish poet Eavan Boland: “She wrote of today’s Republic of Ireland. She said:

'Our island that was once

Settled and removed on the edge

Of Europe is now [the] bridge

“It has that capacity.

“Tonight, let us salute that bridge to the world. A bridge that for generations has gone back and forth between Ireland and the United States, and that grows stronger and more necessary as every year passes. And I mean it. I mean it.

“We feel it across America, especially during the week of St. Patrick’s Day in cities and towns big and small.”

“There’s a good chance they knew each other, I’m told when I was in Ireland, because they were both shoemakers. And they left everything behind for an uncertain future.

“But I wonder, in all their dreams, whether they could have ever dreamt that each of their grandsons would one day be President of the United States of America.

“And now it’s up to all of us to keep the sense of possibility for every person who gives up everything in search of a better life. That’s been our history. It’s our present. And if we’re lucky, it will be our future.”

You can watch President Biden's address from the Ireland Funds Gala in Washington, DC on March 16 here: