Beating the battle of Coronavirus - this Irishman in New York survived

“At my lowest point, I wanted to die. I was weak and terribly depressed." 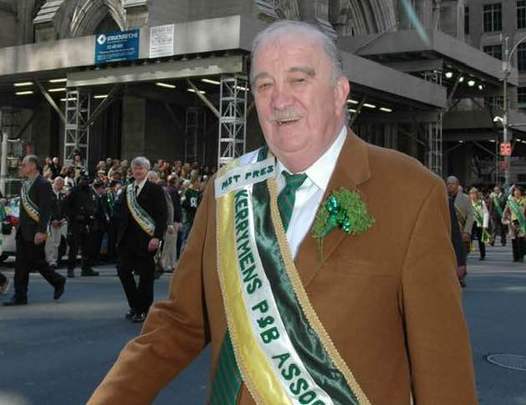 “At my lowest point, I wanted to die.  I was weak and terribly depressed. I looked at a photograph of my late wife Mary Ellen and said, ‘I want to be with you,’” Maurice Brick told the Irish Voice during a phone interview on Monday afternoon.

Brick, a native of Gorta Dubha, Ballyferriter, West Kerry, who has lived in New York for 54 years, is emerging victorious from his ongoing battle against coronavirus, and in the process, he’s beating the odds that show males and the elderly are more prone to succumb to the deadly pandemic that is claiming lives around the world at an astonishing clip.

Brick, who will turn 78 on April 20, is well known to many in New York’s Irish community thanks to his decades-long dedication to the Kerry Association and his involvement in many other endeavors, including the reading of the Prayers of the Faithful in Gaelic each year at the St. Patrick’s Day morning Mass at St. Patrick’s Cathedral on Fifth Avenue.  A fluent Gaelic speaker and a regular traveler to his beloved West Kerry, Brick lost his wife of 51 years, Mary Ellen, last August.

He’s active and healthy save for the odd nick typical of his age group, so when he got some sniffles, a cough, and watery eyes three weeks ago he wasn’t alarmed as the onset of allergy season, which he’s well used to, was close, especially with the mild winter in New York.  But severe lethargy started to set in, so much so that he could barely get out of bed.

The flashing red light indicating Brick might have more than an allergy?  He lives in New Rochelle, which in early March had the largest cluster of Covid-19 positives in the United States, prompting New York Governor Andrew Cuomo to create a containment area around the community about 18 miles north of Manhattan.

“A friend of mine called and gave me the numbers to call to go for a coronavirus test. So I said to myself that I might as well do that if it’s available,” Brick told the Irish Voice.

“I got in touch with someone who asked me a bunch of questions, and then said I would be contacted in a couple of days.  And I was. They gave me an appointment on Saturday, March 21.”

Brick, worsening by the day, summoned the energy to drive himself to the drive-thru testing facility in New Rochelle for a 9 a.m. appointment.  After waiting in a line of cars for the quick swab he was told he’d be contacted in a few days with the result.

On Tuesday, March 24, Maurice Brick became part of the rapidly rising curve in New York with a positive Covid-19 test.  He was, in a word, devastated, stunned to be suddenly a faceless statistic.

And also, he was alone.  The Bricks’ only child, their daughter, Eilis, lives in Chicago with her husband Mike and their two children, Declan and Meghan.  It was Eilis, a recent cancer survivor, who checked a computerized database for her dad’s result.

Maurice Brick with his grandson Declan and daughter Eilis.

“It was a terrible blow to be honest.  I was shocked. My doctor and I had thought it was just my allergies,” Brick said.

Given that he didn’t have a fever, headache or, thankfully, breathing difficulties, Brick’s physician said the best prescription would be to wait out the virus at home given the overflow of critically ill patients in hospitals.

That’s what he did, but it hasn’t been easy.

For a few trying days last week his appetite was non-existent; summoning the energy to make a slice of toast was next to impossible.  All he wanted to do was lie down and stay still.

Depression also crept in for those few days where he thought – and, sadly, wished – the end to be near.  Brick went from an active senior citizen, used to almost daily trips to McLean Avenue in Yonkers to shop and meet his Kerry friends, to practically bedridden in the span of fewer than three weeks.

Being physically alone in his family home was scary and isolating too, but the outside world was determined to keep a watchful eye on their dear friend.  Their never-ending care, Brick says, lifted his spirits and helped bring him back to life.

“I got very down.  I’d try and get up to prepare something to eat and just lie down in the middle of it.  I’d look at Mary Ellen’s photograph and I’d say to her, ‘Look, do me a favor and try and see if you can get me back with you right now because I don’t want to stay here,’” Brick said.

But Mary Ellen for once didn’t listen to her husband.  Neither did their girl Eilis, who desperately wanted to be with her dad but couldn’t.  She made – makes – multiple calls a day to check-in and talk, urging her father to eat, talking about good things, future plans, red-haired, nine-year-old Declan and his deep Kerry veins, how they’ll all be back in Gorta Dubha soon.

Mr. Rogers and his famous neighborhood has nothing on Brick’s tight-knit patch of New Rochelle.  The neighbors there are the same as family and reached out without reservation to help their friend in need, dropping food supplies and whatever else he needed – most of all, moral support – right at his door.

“Little by little, with all the love and good wishes, I said to myself that I was going to beat this thing,” Brick said.  “I said that I have to be there for Eilis. I can’t give in.”

The friends list is massive, and Brick apologizes if he’s missed a few – undoubtedly he has, given how highly regarded he is.  His across the street neighbor Brian Galvin is always at the ready with soup.  Marie Weaver, whose father is from Ballyferriter, is a constant caller.  Ditto Gerry O’Shea and all the gang from the Kerry Association, Bob Casey and Danny Lynch, who has been faithfully delivering the papers from home – The Kerryman, Kerry’s Eye – to Brick’s front door. More callers include Brick’s friend Paula and cousin Father Ed Salmon in Chicago.

Last Friday, March 27, started off slowly for Brick, but the tide slowly began to turn during the day and the weekend.  He was able to have a shower one of the mornings without having to stop after a minute to get out and rest.  The energy levels rose a little too.

On Sunday he was able to stay on the phone longer than usual.  Most coronavirus days, he was appreciative of the many calls but couldn’t wait to hang up, such were his sapped energy levels.

“And now I’m talking to you, Debbie,” he tells the Irish Voice on Monday, “and I wouldn’t have been able to speak to you as long as I have a few days ago.   I’m not yet 100 percent, but I’m a far cry from when I looked at Mary Ellen’s photo and asked her to take me away.  My energy is coming back bit by bit, and my doctor thinks I’m over the worst.”

What’s Brick’s advice from the front line that no one ever wants to be on?  Listen to the experts.

“Do what we’re told to do, that’s it.  I have always been careful, washing my hands and disinfecting, but it just so happens I got the virus. And let me tell you, it’s serious,” he says.

“I am getting off light.  There are people on ventilators dying. It is a terrible disease.”

Brick was due to travel to Kerry this month.  Having weathered the worst of the coronavirus storm, he’s confident he’ll be back.

“Coming from Gorta Dubha, we went through a lot of stuff growing up. And we were made to survive. We’ll survive this too.  I want all of us to survive this,” Brick says.