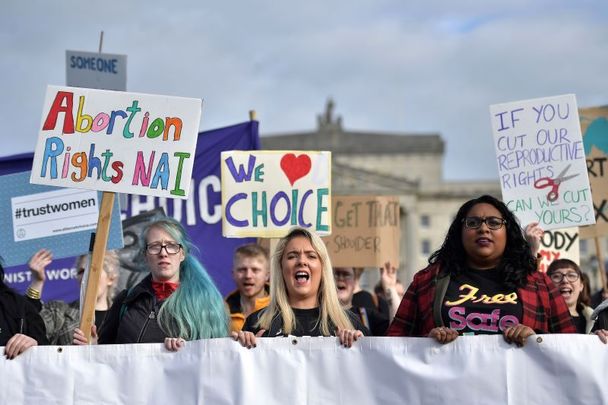 October 21, 2019: Members of pro-choice group Alliance for Choice make their way to Stormont in Belfast, Northern Ireland. Legislation brought in by MPs at Westminster in the absence of the Northern Ireland power-sharing executive meant that abortion will be decriminalised in the province unless the executive reconvened by the 21st of October. Getty Images

Abortion services in Northern Ireland will be commissioned by the UK Government, Secretary of State Chris Heaton-Harris announced today, October 24.

“The Abortion (Northern Ireland) Regulations 2022, which came into force on the 20th May 2022, provide the Secretary of State with the same powers as a Northern Ireland Minister or department for the purpose of ensuring that the recommendations in paragraphs 85 and 86 of the 2018 CEDAW are implemented.

“Today, I am announcing that the UK Government will ensure the commissioning of abortion services.

“21 October marked the three year anniversary of the decriminalisation of abortion in Northern Ireland. It is not right that three years on, women and girls in Northern Ireland are still unable to access the full range of healthcare to which they are lawfully entitled.

“The UK Government has been clear that it would commission abortion services if the Department of Health did not act. We regret that this step is needed, in what ought to be a matter for the Department of Health to implement. The Government has been left with no other option, as women and girls have been left without safe and high quality services, with many having to travel to the rest of the UK or turn to the unregulated market to access healthcare to which they are legally entitled.

"The devolution settlement does not absolve me of my legal obligation to ensure that women and girls can access abortion services in Northern Ireland, as they can in the rest of the UK.

“The UK Government will ensure that appropriate funding is available to enable healthcare professionals to take the necessary steps to ensure that essential training and recruitment of staff can progress, and services can be implemented.”

Today, I have announced the UK Government will commission abortion services in Northern Ireland, following continued inaction from @healthdpt. For too long, women and girls of Northern Ireland have been denied access to basic healthcare.

Abortion was decriminalized and became lawful in Northern Ireland in October 2019, and a new framework for lawful abortion services came into effect on March 31, 2020.

On Monday, Amnesty International UK and Informing Choices NI welcomed the news that the UK Government will commission abortion services in Northern Ireland, which comes a week after the groups penned an open letter to Heaton-Harris urging him to commission services.

The organizations warned, however, that "services will not run as the law requires without funding being put in place at the same time that commissioned services are set up."

A recent poll conducted by Opinium on behalf of Amnesty International UK found that 60% of adults in Northern Ireland think the Government should be doing more to make abortion services available and accessible across Northern Ireland.

In 2021, there were 161 abortions performed in England and Wales for women ordinarily resident in Northern Ireland, according to UK government figures.

In June 2017, the UK's Government Equalities Office announced that people from Northern Ireland would no longer be charged for accessing abortion services in England. Despite abortion being decriminalized in Northern Ireland in 2019, this scheme remains in place.

Currently in Northern Ireland, terminations are permitted unconditionally up to 12 weeks. A termination is permitted up to 24 weeks when continuing the pregnancy would risk mental or physical injury to the woman or girl that is greater than the risk of terminating the pregnancy. There is no time limit when there is substantial impairment to the fetus, including when death is likely before, during, or shortly after birth, or when there is a risk of death or serious permanent injury to the woman or girl.

Only medical professionals (registered doctors, nurses, and midwives) can perform terminations in Northern Ireland. Professionals may conscientiously object to performing a termination, unless it’s necessary to save the pregnant woman or girl’s life or prevent serious permanent physical or mental injury.

Terminations in Northern Ireland can take place at GPs, Health and Social Care (HSC) premises, or at home for the second stage of early termination via abortion pills only.