Thomas J. Scanlon, who was named the Grand Marshal of the 2020 Cleveland St. Patrick's Day Parade, will march alongside this year’s grand marshal Thomas F. McManamon on Thursday, March 17. 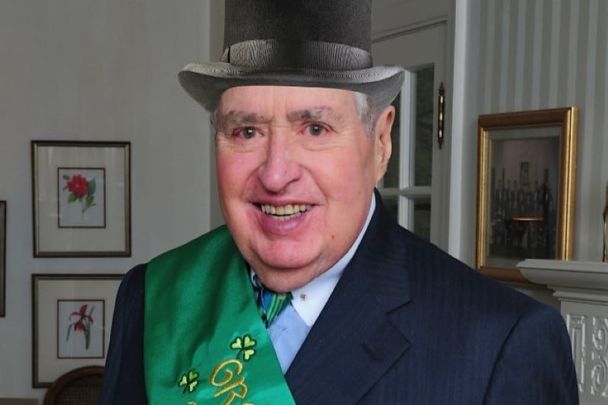 Many might be aware of Edward Everett Hale’s fictional novel “A Man Without a Country,” but Cleveland’s Thomas J. Scanlon has been a St. Patrick’s Day Parade grand marshal without a parade… until now. Due to Covid, the 2020 and 2021 Cleveland parades were canceled.

However, 2022 will see its return, and Scanlon will march alongside this year’s grand marshal Thomas F. McManamon on Thursday, March 17.

Michael Scanlon, born in Curry, Co Sligo in 1803, immigrated to Cleveland in 1848. He married Irish-born Honoria Flanigan in 1852 at St. John’s Cathedral. Their son Michael the second was the father of Thomas J. Scanlon the second.

After Scanlon the second married Marie Grady, they resided in the Tremont/Irishtown Bend area on Cleveland’s West Side. Visitors to St. Augustine Church on West 14th Street will see a window bearing the Scanlon family name where his grandfather was involved in the construction and support of the church.

Thomas J. Scanlon, the subject of this story,  is the third. His sister Elizabeth (Sister Elizabeth Marie) is a retired sister of Notre Dame in Chardon, Ohio. His only brother John is deceased.

Being the energetic and spirited man he was, and is, he graduated from John Carroll University in three years at 21 years of age.

Scanlon held a myriad of jobs while at John Carroll and during law school.  He obtained a CDL in order to drive a truck to make deliveries. While working at Tremco Manufacturing in Cleveland he learned a required course that was only available during the day.

As the resourceful and likable man he is, he brought the idea of a tradeoff of his vacation days if he could attend the John Carroll class twice a week. The boss complied!

His achievements are enormous and too many to mention. Among them are many civic and charitable affiliations that reflect his Irish heritage, such as leadership roles as a founding member and past president of the Irish American Law Society of Cleveland, where he is also a board member and 2007 alumnus of the year; Irish Legal 100 since 2009; Cleveland International Hall of Fame and the Cleveland Mayo Society Board of Directors.

Scanlon has been a marathon runner, having participated in Cleveland, London, Dublin, and New York. He won a gold medal in Australia while he was there on business.

Scanlon founded the law firm Donahue & Scanlon but is now currently affiliated with the Cleveland law firm of Hawkins & Company, LLC where he represents a family business. He provides comprehensive legal services to clients including estate plan and trust administration.

His annual St. Patrick’s Day party ran for 41 years and was the best in town. Invitees were always the Who’s Who in the Cleveland Irish community and many non-Irish too.

The party started one March when he got a phone call from Sam Miller. He had a friend in town from Ireland and, seeing St. Patrick’s Day was fast approaching, was wondering if Scanlon could possibly entertain him for a day. Scanlon decided to invite Ben Briscoe, Sam Miller’s friend and the lord mayor of Dublin, to be the main guest and speaker at his annual St. Patrick’s party. Thus was the beginning of Scanlon’s hosting to Irish Supreme Court justices and Irish government officials.

Scanlon met the woman who would become his wife, Anita Marciante, while he attended law school and she was an assistant buyer for the Sterling-Linder department store in Cleveland. They have been married 57 years and are the parents of Elizabeth Donnelly (Brian) of Birmingham, Michigan.; Colleen Miller (Tim) of Lexington, Kentucky; Cyndy Scanlon of Cleveland; and Kim Klein (Jeff) of Princeton, New Jersey, They are blessed with seven grandchildren.

Coincidentally, while Scanlon is officially being recognized as the 2020 parade marshal, Father Tom Mahoney is being honored as the Cleveland Hibernian of the Year. And they’re first cousins. Scanlon stated that his achievement is due to the love and patience of his wife and his daughters.