The Morris County St. Patrick's Day Parade has been postponed from this Saturday, March 12 due to weather. 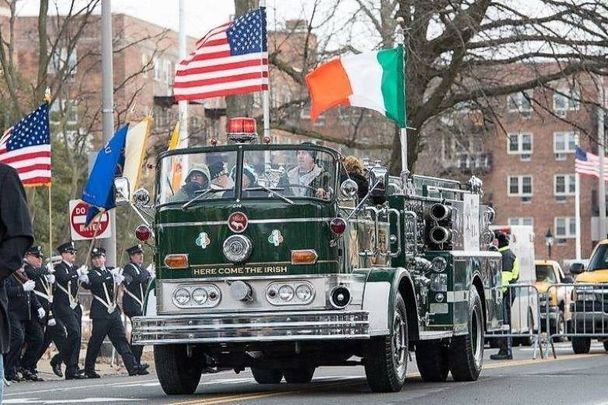 "After consultation with the town, the decision has been made to postpone the Morris County St. Patrick’s Day parade to its rain date of March 19. The weather is not cooperating with us to enjoy the first parade since 2019.

"All events will start at the same time next week. For any questions, please check our Facebook page or go on to ParadeDay.com for updates.

The Morris County St. Patrick’s Day Parade, the largest in New Jersey, will return this Saturday, March 12 with step-off at noon from Morristown Town Hall on South Street before going around the Green and continuing west on Washington Street.

Born in Jersey City, Waller is the oldest of four girls born to Irish Americans Mary and Maurice O’Connell. Her paternal grandparents were born in Tullig, Dingle, Co Kerry, and Macroon, Co Cork and her maternal grandparents’ family is from Drumcliffe, Co Sligo.

Waller, the proud mother of five children and thirteen grandchildren, has volunteered for many causes, including the Irish American Association of Northwest Jersey and the Morris County St. Patrick’s Day Parade. Her Irish heritage and upbringing have provided her with the strength, perseverance, humor and understanding that we are all a product of our life’s experiences.

The St. Patrick’s Day celebrations in Morristown date all the way back to the era of George Washington. In 1780, after a long, hard winter in Jockey Hollow in Morristown, General George gave his Irish militiamen - and there were plenty of them - the day off on March 17 in recognition of their support, thus becoming what is claimed to be the first St. Patrick’s Day Celebration in the US.

On March 17, 1979, the first official modern-day Morris County St. Patrick’s in Morris County was held in Wharton, NJ thanks to the Irish American Association of Northwest New Jersey (IAANJ). Parade marchers paraded down a one-mile stretch of Main Street in Wharton to the cheers of hundreds of spectators.

In 1981, while on a trip to Ireland, the president of IAANJ commissioned the nuns of the Carmelite Monastery, Tallow, Co Waterford to produce a hand-painted banner of St. Patrick and this exquisite work of art has led all Morris County St. Patrick’s Day Parades since then.

The parade continued to grow and in November 1990, the IAANJ teamed up with the Friendly Sons of St Patrick (FSSP) of Morris County and began working with the Morristown administration to bring the parade to Morristown, the county seat which boasted a safe environment for a fun-filled family day as well as a rich history in Irish culture.

On January 18, 1991, a Certificate of Incorporation for Non-Profit Organization was issued for St. Patrick’s Day Parade of Morris County, Inc., and a Board of Trustees was formed for the new non-profit organization. It was formed to run the parade, pay parade expenses, and provide charitable contributions to promote Irish culture and support various local children’s and other organizations that benefit Morris County.

Less than two months later, the annual Morris County St. Patrick’s Day Parade stepped off in Morristown for the first time with 3,000 marchers, 13 bands, and several floats and fire companies. Thousands of spectators turned out to witness the parade.

To accommodate the parade’s growth in size and popularity, the official route was extended by three blocks in 2006.

Since 1991, the Parade has voluntarily donated over $250,000 to the Town of Morristown, as well as almost $350,000 to local charitable organizations in keeping with the mission of our Non-Profit organization.

The Morris County St. Patrick’s Day Parade is fully self-funded and receives no public funds for parade expenses. It is funded solely by generous donations from corporate and individual sponsors. There is no public money involved so there is no cost to taxpayers.

You can learn more about the Morris County St. Patrick's Day Parade on its website and Facebook page.