Irish castle hotel with 800 year history, on the market for $1.9m

Blackwater Castle, a lovingly restored heritage site of international significance is being sold for just €2 million. 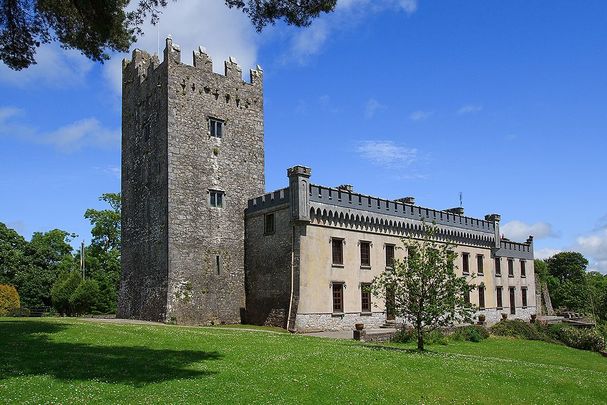 Located on 60 acres of land, with a history dating back 10,000 years, Blackwater Castle, in Castletownroche, is a nine-suit dream come true.

Blackwater Castle, a 12th-century castle in the village of Castletownroch, County Cork, has newly come to the market for just $1.9 million (€2m). This great Irish castle was purchased by its current owners in 1991 and lovingly restored.

With a living space of 890-square-meters, nine bedrooms, six reception rooms and a professional kitchen, Blackwater Castle was revitalized and serves an exclusive wedding and banqueting venue with many international clients falling in love with the beauty of the location.

Blackwater Castle's lands have a history dating back 10,000 years to the Mesolithic period with evidence of settlements discovered on the 60-acre property. It was also the home of the former Viscount of Fermoy and Lords of the Barony of Fermoy, a truly unique heritage site of international significance.

The property has been brought to the market by SherryFitzgerald who describe it as "a true medieval site of architectural importance."

One of the oldest habitable homes in Ireland, sections of the castle date back to the early 15th century.  Architectural features include a 12th-century round tower, a 15th-century tower house, watch towers, Sheela na Gig, defense walls and the Holy Well of St. Patrick.

The castle also boasts of a splendid stone-fronted courtyard and a delightful walled garden that has been lovingly maintained. 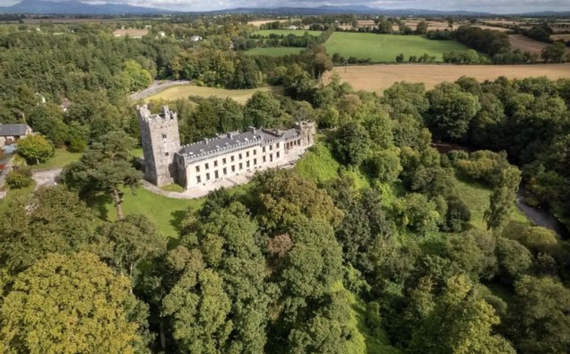 An aerial shot of Blackwater Castle, in Cork.

The Castle has played host to nobility throughout the centuries, being a center for hospitality from past to present and home to Gaelic Chieftains and Norman Lords. Sir Walter Raleigh captured the castle in 1580 and in 1649 Oliver Cromwell laid siege to it.

In more recent years the castle has played host to celebrities such as President Michael D Higgins and Michael Jackson.

Blackwater’s history spans thousands of years, originally populated during the early Mesolithic period. There is further evidence that the site had been occupied during the late Bronze Age and early Iron Age too when it was known as the fortress of Dún Crúadha.

Blackwater Castle is also a site of spiritual significance; below the castle near the River Awbeg is the Holy Well of St. Patrick. 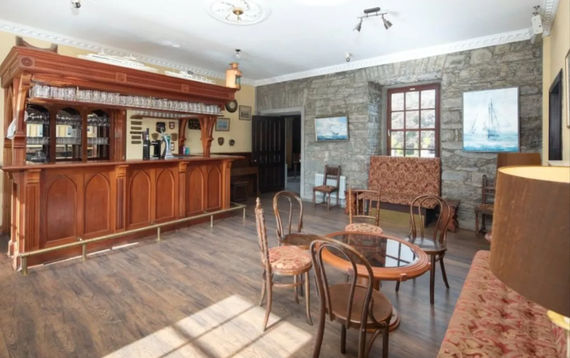 The pub at Blackwater Castle, Cork.

The accommodation is made up of nine spacious suites, sleeping up to 23 people across the first and second floors. The six reception rooms include a breakfast room, dining room, tea room, a bar area, the piano room and a library. A fully equipped commercial kitchen is spacious and offers the potential to continue a catering enterprise at the castle.

The listing reads "To the rear of the castle there is a large stone fronted courtyard, originally forming part of the Norman “outer bailey” with huge potential and with such uses as residential, commercial, and other business types, subject to the relevant planning permission. These spaces were created for the golden age of horse-drawn transport and are exceptionally atmospheric."

Blackwater Castle, built at the tip of this ancient promontory fort, is set on approximately 24ha (60 Acres) of gardens and woodland, with the River Awbeg flowing around the base of the fortress in a horseshoe shape.

Mature woodland in a steep valley surrounds the imposing Irish castle and its courtyard while expanses of neatly mown lawn create some lovely open spaces around the castle itself.

There is also a spectacular, approximately 1.5 acre, walled garden which is "both fascinating and beautiful," according to SherryFitzgerald.

"The stone arch entrance is captivating due to the draping canopy of wisteria cascading over the gates. The fertile Irish soil encourages a plentiful harvest of fruits and vegetables in the garden every year. Bordered by dense shrubbery, the gardens include variations of vegetable and fruit species such as peach, pear, apple, cherries, blackberries, currants, gooseberries, and raspberries, all wonderfully presented. A quaint greenhouse provides a space of quiet reflection and allows for the growing of exotic fruit and vegetables such as melons and chili."

Blackwater Castle is a 500-meter walk to the village of Castletownroche, about 10 miles (16km) from the towns of Mallow and Fermoy and an hour's drive from Cork Airport.

Castletownroche supplies locals with the necessities including a post office, pharmacy, hairdressers, small supermarket, petrol station, pubs and takeaways. However, being surrounded by mature woodland and positioned at the end of a 350-meter-long driveway, the property is very private despite being so close to the village center.

Check out the full listing here.

Traditional stone cottage in Mayo on the market for $59k