Thousands of ancient holy wells in Ireland that serve as sites of worship and prayer continue to attract visits from miracle-seekers. 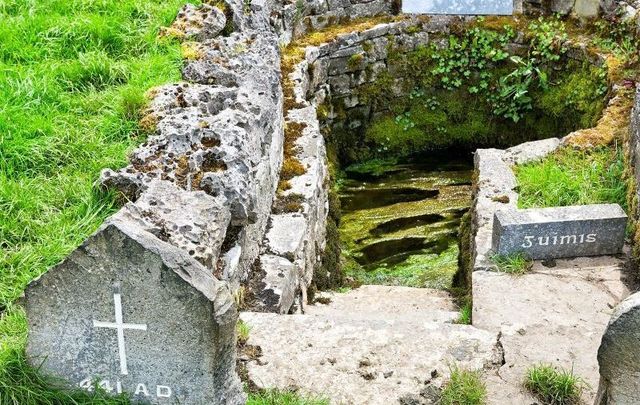 Thousands of holy wells in Ireland serve as sites of worship and prayer and continue to attract visits from miracle-seekers.

Ireland is home to more than 3,000 holy wells, each attached to their own saints, legends, and healing properties. These holy wells have been sites of worship and prayer for centuries and are still visited today by those who seek the miraculous cures offered by the waters.

Read More: How to find a holy well in Ireland

Even before the coming of Christianity, the wells were known as sacred sites to those who worshiped pagan gods. They were then blessed and consecrated by the early saints of Ireland, such as Saint Patrick.

Thanks in part to Saint Patrick, one doesn't have to go very far in modern-day Ireland to find a church, but in the saint’s time, Patrick would have had to use the abundant wells and streams that populated the Irish countryside to baptize his converts, giving way to what we know today as Irish holy wells.

Many of Ireland's holy wells have originating stories that prove sacred sites of an older religion retained their sacredness but were conveniently converted to a newer faith.

One Irish site that merges paganism and Catholicism is St. Patrick's Well in Belcoo, Co Fermanagh. The site is thought to be the former domain of Crom Dubh, a dark pagan god of harvests, merry-making, and human sacrifice. At the site, the pagan god's altar was struck by St. Patrick's staff, breaking it into pieces and expelling Crom Dubh thus transforming the site into a holy Christian landmark.

Patrick’s name has been given to many of Ireland’s holy wells, some of which are said to still hold the power to cure ailments and perform miracles. The celebratory dances and feasts that would have honored these sites have been replaced by the Christian ritual of the Stations of the Cross, and this St. Patrick’s Day will see many Irish people visiting the ancient holy wells of Saint Patrick.

The collective holy wells of Ireland were said to cure anything from a headache to mental illness. However, a lot of knowledge relating to the specific cures offered by the holy wells is lost to us now, and many are simply said to have healing powers.

For example, at St. Patrick’s Well in Clonmel, Co. Waterford, one of the biggest holy wells in Ireland, pilgrims were said to have descended a flight of steps into the pool to receive a miraculous cure, though the nature of the miracle is unclear.

Ireland’s sacred spaces and the ancient art of healing

However, some local areas maintained strong records of their wells. St. Patrick’s Well at Belcoo, Co. Fermanagh, reputedly has the cure of stomach and nervous complaints.

Caoimhin O'Danachair, a Limerick scholar and historian, says the water from St. Patrick's Well at Patrickswell town in Co Limerick is recorded as curing sores, toothaches, as well as cattle. The water was also sprinkled on crops and churns, while medals, rags, and drinking cups hung from the great elm tree that stood beside it.

When writing about St. Patrick’s Well in Leitrim, local historian Joe McGowan reported a 1938 account of the well's curative properties: “For a cure for sore eyes, the water is rubbed on, for a cure for a sick animal, it is given to the beast to drink."

"Numerous cures have been reported. People have been cured of sore eyes, sore throat, toothaches, headaches and many other ailments."

Saint Patrick: a blessing and a curse

Legend tells us that Saint Patrick himself was known to curse as well as bless. One story goes that as the Saint made his way over the River Duff on the Sligo-Leitrim border, he asked some fishermen if he could have some salmon but they refused him, saying “They’re scarce today”.

Unhappy with the fishermen’s mean reply, St. Patrick replied: “May they always be so”, which resulted in the end of fishing in that region for a long time.

When Patrick asked the same question of the Cassidy fishermen on the River Drowes and was granted his meal, he blessed them with the words “May the Drowes never be without a salmon nor a Cassidy to catch them.” The Drowes continues to be a popular fishing spot and generally produces the first salmon of the year.

While some people may be skeptical of Irish holy wells and their powers, those who disrespect them may be susceptible to their powers as well. Joe McGowan shared the story of a well in Templeboy, Co. Sligo, which was filled in by Captain King after the angry landlord observed parish people praying around it. The following spring, each of the landlord's mares bore blind foals and he himself was later shot outside the Courthouse in Sligo town.

Read More: Historic Irish blessings for you and your loved ones

The rituals and traditions around Irish holy wells

Supposedly, one of Saint Patrick’s favorite places was on the Sligo-Leitrim border in Tullaghan, Co. Leitrim where two wells now bear his name: ‘Tobair Phadhraig’ (Patrick’s Well) and ‘Tobair na Bheartha’ (Well of the Shaving) where St. Patrick and his companions were said to have stopped to shave.

Joe Mc Gowan writes that The Schools Manuscript Collection of 1938 records how this ritual should be performed around the well: “The pilgrim begins on the east side of the well at the statue of St. Patrick."

"Here he says 5 Our Fathers, 5 Hail Mary’s, 5 Glories and the Creed. He then goes clockwise and on reaching the cairn on the south side he says 3 Hail Marys and casts a small stone on the heap. He proceeds to the well on the west side where he kneels and says 3 Hail Marys and casts another stone on the cairn. On again to the north where he says the same and again casts up another stone. This is done 3 times casting up 9 stones in all. "

Similar prayer rituals are performed at other wells dedicated to Saint Patrick.

At the site of many holy wells, it is also a custom to tie rags and handkerchiefs to the trees that surround the well. This is done with a specific request in mind and with the faith that as the piece of cloth wears away, so too does the illness that the person has prayed about. This tradition is still carried out and many sacred wells sport the colorful and ragged remains of its devotee's prayers.

Some of the holy wells dedicated to Saint Patrick in Ireland:

Read More: May the Road Rise Up to Meet You - the story behind the traditional Irish blessing

Have you visited any of St. Patrick's wells in Ireland? Let us know about the visit in the comments section, below.