IrishCentral’s Book of the Month: “The Last September” by Elizabeth Bowen 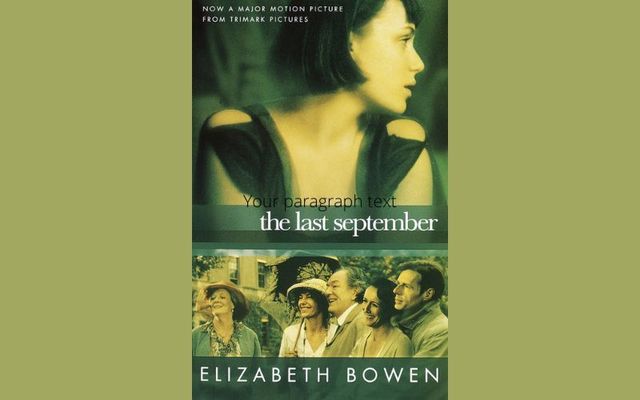 The cover of a 2000 edition of "The Last September" by Elizabeth Bowen. Penguin Random House

“The Last September” by Elizabeth Bowen is the September 2022 selection for the IrishCentral Book Club.

Throughout September, we’ll be reading “The Last September” by Irish author Elizabeth Bowen. An older book for the IrishCentral Book Club, this novel was first published in 1929.

Decades after its first publication, a preface text was added to the novel to help contextualize the period it was set in - 1920s Co Cork. In the preface, Bowen wrote that this novel is "nearest to my heart, [and it] had a deep, unclouded, spontaneous source.

"Though not poetic, it brims up with what could be the stuff of poetry, the sensations of youth. It is a work of instinct rather than knowledge—to a degree, a 'recall' book, but there had been no such recall before.”

In 1999, 70 years after its first publication, "The Last September" was made into a film with a screenplay written by Irish novelist John Banville. The movie stars Maggie Smith, Michael Gambon, Keeley Hawes, David Tennant, Lambert Wilson, Jane Birkin, and Fiona Shaw.

Synopsis of “The Last September” by Elizabeth Bowen

"The Last September" is Elizabeth Bowen’s portrait of a young woman’s coming of age in a brutalized time and place, where the ordinariness of life floats like music over the impending doom of history.

In 1920, at their country home in Co Cork, Sir Richard Naylor and his wife, Lady Myra, and their friends maintain a skeptical attitude toward the events going on around them, but behind the facade of tennis parties and army camp dances, all know that the end is approaching—the end of British rule in the south of Ireland and the demise of a way of life that had survived for centuries. Their niece, Lois Farquar, attempts to live her own life and gain her own freedoms from the very class that her elders are vainly defending.

"The Last September" depicts the tensions between love and the longing for freedom, between tradition and the terrifying prospect of independence, both political and spiritual.

Reviews for “The Last September” by Elizabeth Bowen

Elizabeth Dorothea Cole Bowen was born in Dublin in 1899, the only child of an Irish lawyer and landowner. She wrote many acclaimed novels and short story collections, was awarded the CBE in 1948, and was made a Companion of Literature by the Royal Society of Literature in 1965. Her book "Bowen’s Court" (1942) is the history of her family and their house, in Co Cork. Throughout her life, she divided her time between London and Bowen’s Court, which she inherited. Her other notable works include “Fourteen Sonnets,” “Pictures and Conversations,” “The Death of the Heart,” “The Demon Lover,” “The Heat of the Day,” “The Hotel,” and “The House in Paris.” She died in London in 1973.

The worst Irish movies ever made