The Association of Irish and Celtic Festivals (AICF) presents the free, virtual "A Celebration of St. Brigid" hosted by Eileen Ivers and Joanie Madden this February 1! 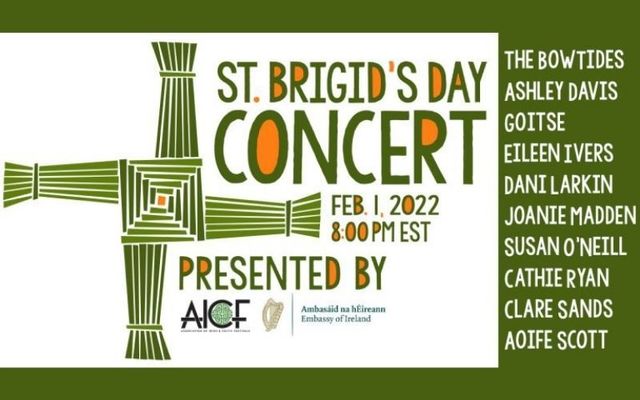 The Association of Irish and Celtic Festivals (AICF) is proud to be hosting a free online concert, "A Celebration of St. Brigid," an all-female virtuosic line-up featuring some of the best traditional and folk musicians in Ireland and America today.

With generous support from the Embassy of Ireland, the AICF will be showcasing eight acts from all over the world, highlighting some of the best female Irish music performers. From established acts to up-and-coming groups, this all-female celebration highlights an important piece of Celtic culture.

Tuesday's special event, which will be hosted by Eileen Ivers and Joanie Madden, will be streamed live on AICF's YouTube and Facebook, as well as here on IrishCentral and on IrishCentral's Facebook page this Tuesday, February 1 at 8 pm EST.

St. Brigid is one of Ireland’s patron saints, although not quite as famous as her male counterpart, St. Patrick, but has legends and tales all her own. The AICF, which is dedicated to bringing Irish culture to the United States via Irish and Celtic Festivals, wanted to celebrate her importance and bring her holiday, February 1, to the forefront.

Erin O’Rourke, from Indy Irish Fest and one of the executive board members for the AICF organization, said: “After our success with our Irish Christmas Concert, and reaching new audiences through our programming, we wanted to continue our mission of education, and what better way than through St. Brigid’s Day, and a celebration of the female spirit.

"We hope that by highlighting this  Irish patron saint and her holiday and stories, we can entertain and educate audiences with a program that celebrates her, and some of the best female Irish musicians and dancers across the  world.”

AICF says this event would not be possible without the generous support of the Embassy of Ireland, and their continued support of the AICF mission of bringing the Irish culture, via music, education, food, and dance, to those not in Ireland in the hopes that those traditions are never lost.

“The Embassy and Consulates of Ireland in the USA are delighted to support the second annual St.  Brigid’s day concert showcasing Ireland's rich musical heritage and incredible female artists,” said Cathal McMorrow, from the Embassy of Ireland.

Ivers, who will also perform during the event, said: “St. Brigid was a light in the darkest of times, a peacemaker, a woman who provided sustenance and a safe haven for all. I’m thrilled to be joining other female artists as part of a live stream concert honoring this beloved Irish saint.

"May the perpetual flame that St. Brigid ignited so long ago, which still burns in Kildare Town’s Market  Square today, live in our hearts and shine through the gift of music and community.”

Additional guests and performers for "A Celebration of St. Brigid" on February 1 include:

The Bow Tides, featuring fiddlers Jessie Burns (Colorado), Katie Grennan (Chicago), and Ellery Klein (Boston), don’t let any tune sit long without lush harmonies or rocking rhythms. This power trio met through their revolving role as Gaelic Storm’s fiddler spanning a nearly 16-year stretch. In 2020, they joined forces after being commissioned to produce two virtual concerts for US-based Irish Festivals, leading to their first in-person appearance at Pittsburgh Irish Festival in the fall of 2021. As seasoned performers, composers, and educators, they have individually logged thousands of hours playing on renowned stages around the world.

The Bow Tides released a series of singles in 2021 which have seen airplay on numerous Celtic radio programs and are available on Bandcamp. The trio kicked off 2022 by producing their second international virtual music school, Fiddle Frenzy alongside founding Solas fiddler Winifred Horan which featured other female powerhouse fiddlers from the Celtic genre including Liz Carroll, Catriona Macdonald, and Brid Harper.

The Bow Tides' dedication to their art form, the community they build through music, and the uplifting connectivity they exude whilst performing together is a joy to behold.

Ashley Davis is an American singer-songwriter whose musical imagination invites the world into her eclectic sphere. Think Joni Mitchell meets contemporary Celtic and you’ll get something like the creative force of Ashley Davis. While this mash-up may classify her work, Davis’s unique ability to capture and cross musical traditions ultimately transcends comparison.

The popular and multi-award-winning quintet Goitse was forged in the white-hot creative crucible of Limerick’s Irish World Academy. Named Live Ireland’s “Traditional Group of the Year" and Chicago Irish American News’ “Group of the Year,” Goitse have become a leader of the new generation of traditional Irish ensembles. Their distinctive sound lies in the quality of their own compositions interspersed with traditional tunes from the countryside of Ireland and abroad, which make each performance unique.

Dani Larkin is a singer-songwriter and folk musician from the Armagh-Monaghan border. Her sound is inspired by the Irish traditional melodies she was raised with, her songs are reminiscent of Celtic folk tales. Hailing from the Armagh-Monaghan border, Dani is a singer-songwriter and folk musician who is already being heralded as one of Ireland’s finest songwriters. Larkin has been creating music for several years and is a well-known face on the live circuit in Ireland. A storyteller by nature, her music is inspired by the folktales she was raised with, intertwined with elements of traditional melodies and rhythms from around the world in a timeless tradition. She is a seasoned performer who is impossible to ignore once taken to the stage.

A critically acclaimed performer, as well as a member of King Kong Company,  SON - aka Susan O’Neill – is one of Ireland’s brightest emerging talents. The basis of her first album ‘Found  Myself Lost’ saw SON find her voice amongst her peers, introducing her unique and otherworldly style. The enigmatic singer-songwriter honed her musical skills as one of the youngest members of  the Ennis Brass Band and gained her first gospel influences with the ‘Really Truly Joyful Gospel Choir.’ Eclectically fusing traditional Irish folk with rock, soul, gospel, and blues, her live performances are quite simply electrifying. Her husky vocals combined with her superb guitar technique, loop pedals, and trumpet, have wowed audiences everywhere from Stradbally to Sydney, Glasgow to Glastonbury, Manhattan to Milwaukee, and many places beyond.

Cathie Ryan is a captivating performer whose shows are renowned for their intimacy and power, as well as her witty banter. For over 25 years, including five solo albums, countless musical collaborations, and multiple awards, Cathie Ryan has been in the vanguard of Irish music. She is blessed with a voice of luminous clarity and a gift for unearthing gems from Irish and American song traditions, creating her own heart-stirring originals, and for showcasing writers whose work deserves wider recognition. Wrap this musical integrity into a consummate entertainer and it is no  wonder the Wall Street Journal calls her music, “a revelation.”

Clare Sands is a sixth-generation fiddler and multi-instrumentalist creating an eclectic and energetic folk sound rooted in Irish Traditional music. The remarkably versatile musician, composer, performer, and singer-songwriter is an unstoppable artist to be reckoned with. The Cork-born artist with deep family roots in Northern Ireland and County Wexford took up the fiddle at the age of three, learning tunes from her father Seamus on a weekly basis while her mother Susan introduced her to the Blues. Clare Sands is a passionate and alluring unique force in Irish music and has been wowing audiences around the world with her groundbreaking style, gravelly vocals, exceptional performance, and infinite energy.

Aoife Scott is a Dublin folk singer-songwriter, with an impeccable pedigree as a member of the legendary Black Family, which includes her mother, Frances, and her aunt, Mary. Aoife is steadily rising to the top of the traditional and folk music scene while garnering acclaim and recognition both in Ireland and abroad as she hones her craft and continues to be a force to be reckoned with on the Irish Folk and traditional scene. Her sublime voice is a thing of beauty that stops people in their tracks. Aoife has steadily risen to the top of the traditional and folk music scene, has long enjoyed success as an established artist in her own right. Fragile and ethereal one minute and strong and vibrant the next, her dynamic and profound vocals explore the emotional depths of her lyrics, leaving the audience entranced.

For more information about this event, or for festivals interested in joining the AICF, please visit IrishCelticFestivals.org.