On a week when the theologian and founder of University College Dublin was canonized and Dublin council began talks to bring the literary giant Joyce's remains home, we discuss how one great influenced the other. 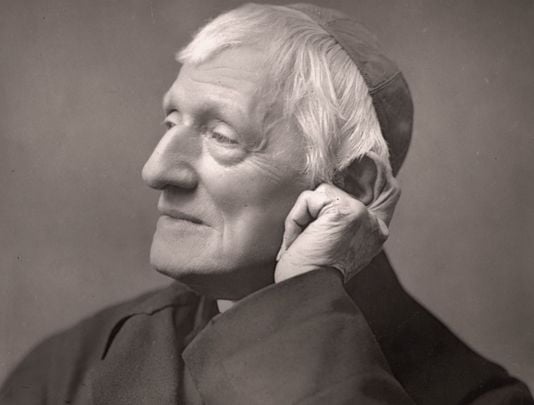 On a week when the theologian and founder of University College Dublin was canonized by Pope Francis and Dublin council began talks to bring the literary giant Joyce's remains back to Dublin, we discuss how one great influenced the other.

In James Joyce’s semi-autobiographical novel A Portrait of the Artist as a Young Man, Joyce’s alter-ego Stephen Dedalus said that John Henry Newman was the greatest literary writer. This was a startling moment.

John Henry Newman was a theologian who established the Catholic University of Ireland in Dublin, which later became University College Dublin. He was a relatively remarkable figure, but could hardly compete with the literary powerhouses Joyce praised, such as Henrik Ibsen, Gustave Flaubert, and William Shakespeare. Why then did Joyce have his literary self answer “Newman” when asked to name the greatest writer?

The response is not completely random. Part of what incenses Stephen in A Portrait is that his Jesuit instructors do not follow the model of what a university should do as outlined by their founder. In his book The Idea of a University, Newman stresses that a university is in the service of providing knowledge for knowledge’s sake. Stephen’s teachers, however, are more concerned with preparing their students for a career than contemplating the eternal mysteries. Stephen’s attempts to discuss aesthetic subjects are rebuffed by teachers who want Stephen to be more “practical” in his priorities.

Newman would have been the ideal teacher to Stephen. He would have participated in the discussions that Stephen wanted to have without chiding him.

There are moments in A Portrait where Newman is presented as the only person who understands Stephen. Stephen listens to his younger siblings singing by the fire and hears the “pain of spirit” lurking behind their innocent voices. Newman had described the “pain and weariness yet hope of better things” as being part of all children’s lives. Newman’s words are a source of comfort for Stephen. They offer him validation and emotional support, but the man himself seems to be the only person who had the ability and willingness to relieve Stephen’s feelings of distress and isolation.

The respect Joyce had for Newman continued throughout his life. When Joyce was writing the “Oxen of the Sun” episode of Ulysses, one of the writers he imitated was Newman. Joyce told Jacques Mercanton that while all the other authors were parodied, “Newman alone [was] rendered pure, in the grave beauty of his style.” Newman said, in The Idea of a University, that a person’s language and style was as personal as their thoughts and feelings. Perhaps Joyce felt that parodying Newman’s style in Ulysses was betraying a man whose memory had been like companionship through trying times.

Joyce’s rocky relationship with the Church did not impede his admiration of Newman because Newman was not like the provincial and obedient priests in Joyce’s life. Newman was a cosmopolitan and insubordinate figure who shared Joyce’s aesthetic values. His canonization as a saint will help spread the ideas that meant so much to Joyce in his formative years.