Elizabeth and David Browne are appealing for random acts of kindness to mark what would have been their twin sons Daniel and Cormac's 10th birthday. 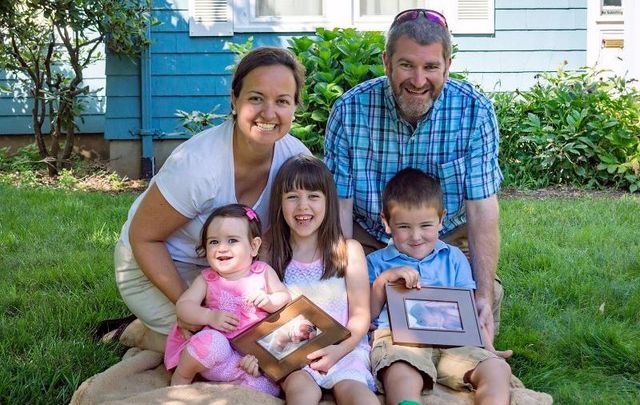 Elizabeth and David with their children. Elizabeth McGloin Browne

Irish American Elizabeth Browne (nee McGloin) and her Irish husband David are encouraging random acts of kindness in memory of their twins Daniel and Cormac who would have turned 10 years old this month.

Back in 2010, I headed to Dublin, Ireland for a semester abroad. I recall vividly that my program coordinator, fellow Irish American Elizabeth McGloin, was in the midst of planning her wedding to an Irish man, David Browne, she couldn’t help but gush over.

Thanks to Facebook, Elizabeth and I have remained loosely in touch over the years. I remember, after returning home to the States, watching from afar as Elizabeth, now married and settled with her new husband in their home in Ireland, chronicled her first pregnancy.

I later learned that Elizabeth and David's twins Daniel Christopher and Cormac Francis were born on February 20, 2011, more than 15 weeks early, at the Coombe Women and Infants University Hospital in Dublin.

Each of the boys weighed just under two pounds and required extensive support following their early birth.

While the skilled and compassionate nurses, midwives, and doctors in the Neonatal Intensive Care Unit cared for the boys, David and Elizabeth spent many hours each day beside their sons’ incubators talking to them, singing to them, and telling them stories.

Now nearly ten years on, Elizabeth and David, who have since welcomed two daughters and another son, remain determined to keep the memory of their cherished eldest sons alive in a way that will help other babies like them and the staff who work so hard to support the babies and their families.

Within the months after their twins' passing, Elizabeth and David reached out to the Coombe to organize donations in Daniel and Cormac's memory. Elizabeth recently told Kildare Radio that she and her husband have helped raise roughly €25k for the Coombe.

While fundraising for the Coombe is a cause close to them, equally as important is keeping the memory of Daniel and Cormac alive.

“Then, as the pandemic continued through 2020, I had ideas for other fundraisers that I could manage virtually.

“Finally, I came to the conclusion that the best way to celebrate our precious boys’ milestone birthday was to tap into what they mean to us and what their lives have meant to so many - in one word: love.

“So for their birthday, we’re asking our friends and family to mark the occasion by doing acts of kindness in their memory during the month of February.

“One act of kindness, ten acts of kindness, big, elaborate gestures or small, simple acts to brighten someone’s day and spread some love."

Elizabeth shared links to documents "in case you’d like to print one out to share with the recipients of your kindness." 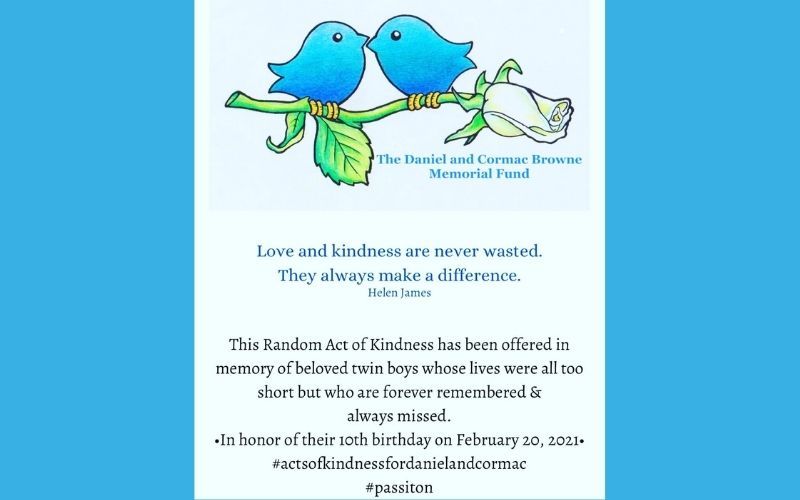 The handouts include the Helen James quote "Love and kindness are never wasted. They always make a difference," and read:

This random act of kindness has been offered in memory of beloved twin boys whose lives were all too short but who are forever remembered & always missed. In honor of their 10th birthday on February 20, 2021

In closing, Elizabeth added: “Thank you so much for always celebrating our boys with us and remembering them with so much love and kindness. It helps us every day and fills our hearts with gratitude.”

Elizabeth and David continue to encourage donations to the Coombe in Daniel and Cormac’s name where possible.