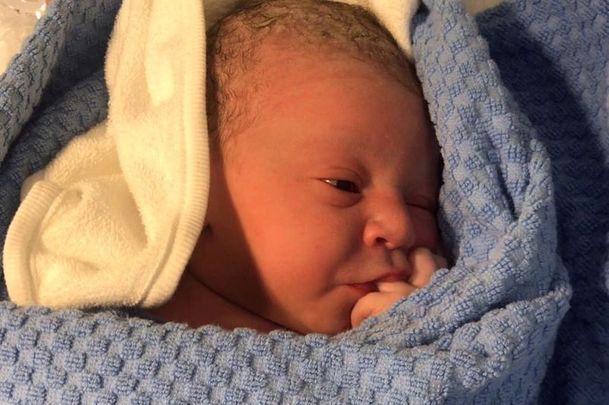 Baby Ellie shortly after making her unexpected arrival at a gas station in Co Kildare. The National Ambulance Service, Twitter

John Feane and Naomi Galvin have been rewarded with a year's worth of free fuel after (unexpectedly) delivering their fifth child, Ellie, at an Applegreen petrol station in Co Kildare on February 3.

"This is the first time we’ve had an ‘Applegreen baby’ and we couldn’t be prouder!," Trevor McBride, Applegreen Regional Manager, said on Thursday.

"We’re thrilled for John and Naomi and thankful that everything went so smoothly, with the help of our magnificent ambulance service of course.

“To help the Feane family celebrate, we’re delighted to offer them a year’s worth of free fuel plus some extra treats and gifts for baby Ellie and her four proud siblings.

"Hopefully, our gift will help John and Naomi to show off their new arrival to friends and family when it’s safe to do so.”

On February 3, a few days after Naomi’s due date with the couple's fifth child, she and her fiancee John went to the Coombe hospital in Dublin to figure out a plan of action.

John told Newstalk that Naomi had been given the all-clear, so they began their journey home. However, en route, Naomi started to feel those “distinct feelings” that a baby was on the way.

Adding to drama, the couple’s car got a flat tire. Thankfully, John was able to replace the tire and the couple made it home, but it was only a few moments before they were back in the car to return to the hospital.

While they initially thought they had enough time to make it back to the Coombe, the situation rapidly changed, and John called an ambulance just ten minutes after leaving home.

Quick thinking John pulled into the Applegreen petrol station in Caragh, Co Kildare as it was well lit and it would be easy for the ambulance to find them.

John, who recalled that he was “professionally sweating" at that point, said that there was probably only eight or nine minutes between the paramedics arriving at the Applegreen station and Ellie making her grand entrance.

“Thankfully the professionals were there and they were going to do the best job in the world," John said.

Afterward, the National Ambulance Service congratulated the new parents on Ellie’s exciting arrival, and noted that one of the attending ambulance crew was on his first day of the job!

This is Baby Ellie!?
Huge congratulations Mum & Dad!
Chief Ambulance Officer @RQuinlan999 & @JanetteOman had the privilege of assisting Mum yesterday evening. #Edenderry Ambulance Crew (1 on his 1st day in the job) then transported all safely to the @CoombeHospital@NasDirector pic.twitter.com/R8Xegd55vx

Applegreen also shared in the excitement:

Congratulations to Naomi and John on the birth of their baby girl Ellie who made an extraordinary entrance to the world, being born at Applegreen Caragh yesterday evening with the support of the @AmbulanceNAS pic.twitter.com/OL9EmFBEVe

Congratulations to all involved in the happy story, and welcome to baby Ellie!