Brian McDonald's "Five Floors Up" tells the story of the FDNY from the perspective of the Feehan family, who have been involved with the Fire Department since William Patrick Feehan joined in 1926. 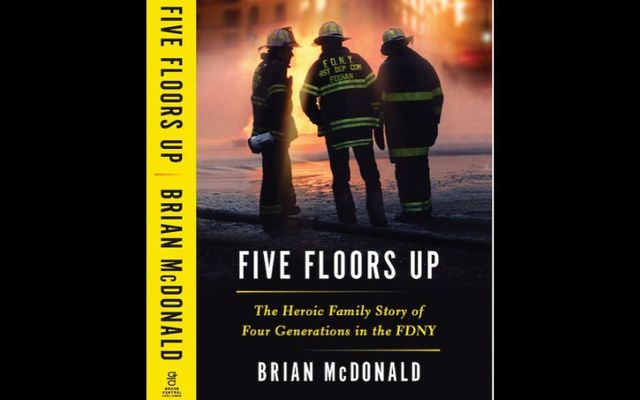 A new book tells the fascinating history of the New York City Fire Department through one Irish-American family that served as firefighters over four generations, spanning 100 years.

Brian McDonald's "Five Floors Up" tells the story of the FDNY from the perspective of the Feehan family, who have been involved with the Fire Department since William Patrick Feehan joined in 1926.

The book spans some of the most important eras and events in the history of the FDNY, including the turbulent 1970s and the tragedy of 9/11.

The tale shines a light on the glittering career of William Michael Feehan - the son of William Patrick Feehan who went on to become the only firefighter to serve in every rank of the Fire Department.

William Patrick joined the FDNY in 1926 at the age of 34 shortly after horse-drawn fire engines had been phased out.

The youngest son of Irish immigrants from County Mayo, William Patrick was hospitalized at least three times during his career and once received the last rites.

McDonald told IrishCentral that William Patrick had something like a "hero gene".

"There are certain firefighters that I've come to know that just can't help themselves from putting themselves in the most dangerous situations to help people they don't know," McDonald said.

William Michael, meanwhile, was more ambitious than his father and rose through every rank of the Fire Department to eventually serve as Fire Commissioner.

That is not to say that William Michael was not heroic during his career, far from it.

As a fire captain in the 1970s, he regularly risked his life while being stationed in a "very active firehouse" in Harlem, where fires in five-story tenement buildings were frequent.

It was those tenement buildings that inspired the book's title. The buildings were notoriously dangerous among Harlem firefighters because there were so many stairs and obstacles inside them. Firefighters often joked that the fires always started in the most difficult part of the buildings to access, coming up with the expression "five floors up, five rooms deep".

The expression became their "call to arms", McDonald said.

William Michael, who was thought to know the location of "every fire hydrant in the city", was First Deputy Fire Commissioner at the time of the attack on the World Trade Center on September 11, 2001.

He was killed while directing a rescue operation at the nearby Marriott Hotel at the time of the collapse of the North Tower.

However, his legacy lives on through his son John, who is currently a battalion chief, his son-in-law Brian Davan, and his grandson Connor Davan, who is stationed in a firehouse in Brooklyn.

McDonald said the Feehan's are part of a dying breed of Irish-American firefighting families, adding that the passing of the baton between generations is starting to diminish.

"It's not as attractive to younger generations (of Irish-Americans) as it used to be," McDonald said.

Irish and Irish-Americans, who found jobs in the civil service through connections in Tamanny Hall, dominated the Fire Department in the early years of the 20th century, with a staggering 75% of all firefighters identifying as Irish Catholics in 1900.

That remained true right up to 9/11, McDonald said.

"If you read the roster of firefighters who died on 9/11, most of them have Irish names."

*Five Floors Up: The Heroic Family Story of Four Generations in the FDNY" is available to pre-order now. Click here to find out more.