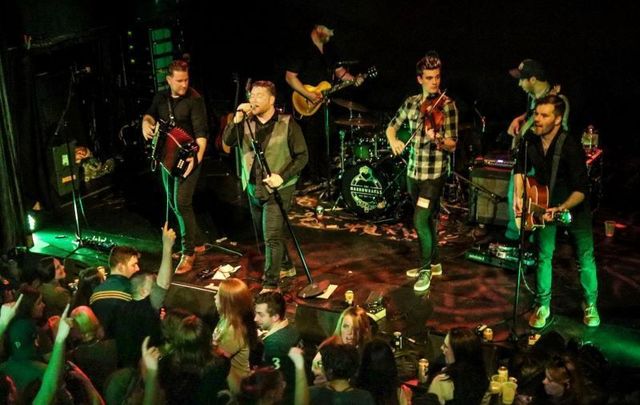 The Narrowbacks, an Irish American rock group based out of New York, are going live for a special musical event this Monday, December 21 and you can tune in right here on IrishCentral!

Presented by Magners Irish Cider, The Narrowbacks Christmas Live Stream will go live at 9 pm EST on Monday, December 21. IrishCentral is delighted to feature the live stream performance right here and over on our IrishCentral Facebook  page as part of our ongoing IrishCentral Happy Hour series.

Like so many other performers, The Narrowbacks have been feeling the pinch of the pandemic and sharing their virtual tip jar on Venmo (@TheNarrowbacks) if you want to show your support.

The Narrowbacks take their name from the disparaging term often used against Irish Americans, which is meant to describe “a person of slight build who is unfit for hard labor.”

The group, based in New York, says they’re “the brainchild of a future banker and drop out bartender” that came together “after some late night sing songs, a couple whiskeys, and a few lost jobs.

“If Joe Strummer, Shane MacGowan, and Bruce Springsteen survived a drinking session through the 5 boroughs, the hangover would be called The Narrowbacks.”

Since their humble inception, the band has gone on to share stages with the likes of Dropkick Murphys, Flogging Molly, Black 47, The Rubberbandits, The Mighty Stef, Derek Warfield and the Young Wolfetones, The Dublin City Ramblers, The Whistlin' Donkeys, and The Mahones.

They've also released their own Christmas song - "Prodigal Son" - which you listen to here: