The Association of Irish and Celtic Festivals (AICF) is presenting its Irish Christmas Concert via live stream this Wednesday, December 16 - tune in here! 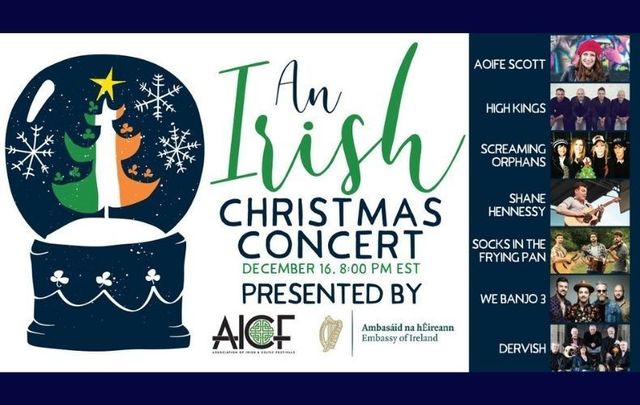 Seven Irish acts are set to perform on December 16 during the AICF's Irish Christmas Concert. AICF

The Association of Irish and Celtic Festivals (AICF) is proud to be hosting An Irish Christmas Concert, with generous support from the Embassy of Ireland, as a way to virtually celebrate the holidays with our Irish friends across the pond.

The AICF will be showcasing seven acts from Ireland, highlighting some of the country’s best musicians, from established acts to up and coming groups, in the hopes of bringing some holiday cheer to those around the world.

Viewers everywhere can tune into this special event on Wednesday, December 16 at 8 pm EST right here on IrishCentral, as well as over on the IrishCentral Facebook page:

Aoife Scott, who has steadily risen to the top of the traditional and folk music scene, has long enjoyed success as an established artist in her own right. Fragile and ethereal one minute and strong and vibrant the next, her dynamic and profound vocals explore the emotional depths of her lyrics,  leaving the audience entranced.

Dervish, a group that marries technical brilliance with a rare sensibility, born of an understanding of the music and many years of playing together. Dervish are long-established as one of the biggest names in Irish music internationally. They’re renowned for live performances, which match dazzling sets of tunes with stunning interpretations of traditional songs.

The High Kings, one of the most well-known Irish ballad groups in modern culture, bringing a new take on traditional Irish ballads to audiences of multiple generations. The High Kings continue to set the bar extremely high for Irish Folk bands across the world and are widely regarded to be at the forefront of the genre.

Screaming Orphans, a group of four sisters with the good fortune to have been raised in the magic of  Bundoran in County Donegal, Ireland. The sisters, since they were young, have been singing and playing traditional Irish music, but knew they wanted to do more, and as they grew older, became a  pop-rock group, growing into the group they are today.

We're delighted to be a part of 'An Irish Christmas Concert' hosted by The Association of Irish & Celtic Festivals. The event is taking place on December 16 @ 8 pm EST with the generous support of @IrelandEmbUSA. The stream will be produced by O'Neill Events & Marketing. pic.twitter.com/ri8AhSan9f

Shane Hennessy, an Irish virtuoso guitarist who has established himself as one of the leading guitarists on the world stage, known widely for his fingerstyle, flat-picking, and percussive guitar playing approaches. His energetic live performances and his cinematically-vivid compositions tie in influences from Bach to Beyoncé – and everything in between.

When asked for his thoughts on this upcoming performance, Shane said, “AICF and all its members have made me feel so welcome each time I’ve visited the United States. What started as a showcase appearance a few years ago has turned into a wide network of friends and supporters, and their nurturing of myself and my fellow Irish artists has introduced us to new audiences all over the USA.

"I am so thankful for their support now, at the most difficult time for musicians and artists in recent history. This stream will bring a lot of joy to fans of Irish culture all over the world, in particular those  of us who desperately miss the festival scene!”

Socks in the Frying Pan, who are a multi-award winning trio from County Clare on the West coast of  Ireland, the universal hub of Irish traditional music. Their dynamic vocal harmonies, virtuosic musical ability, and onstage wit has captured and captivated audiences the world around.

We Banjo 3, who has since emerged as fast-rising touring darlings in the country that two of the members now call home. The Galway, Ireland, and Nashville-based quartet––comprised of two sets of brothers, Enda & Fergal Scahill and Martin & David Howley––continually push musical boundaries while maintaining an unwavering devotion to the essential audience experience.

Mairin Petrone, from Pittsburgh Irish Festival and one of the executive board members for the AICF  organization, said, “Nothing lifts your spirits quite like a classic Irish tune. We’re excited to host this  inaugural event as a way to bring our organizations and communities together virtually, celebrate  Irish Christmas traditions, and provide entertainment for those celebrating the holidays a bit differently this year.”

This event would not also be possible without the generous support of the Embassy, and H.E. Daniel  Mulhall, the Ambassador of Ireland to the United States, said, ‘‘The world’s largest annual Irish  festivals aren’t in Mayo, Meath, Kilkenny or Dublin, Ireland, but in cities across the USA. These and  other festivals across this continent perform an incredible service, celebrating our culture and  connecting Americans with their heritage. This Christmas, as we stay apart to contain the pandemic,  I’m delighted that so many of our friends have come together virtually to present this concert. As we  say in Irish, ní neart go cur le chéile – we are strongest together.’’

The stream will be produced by O’Neill Events and Marketing.

For more information about An Irish Christmas Concert or for the AICF, visit the organization's website IrishCelticFestivals.org or Facebook page.