Through film, painting, drawing and interviews, Belfast-born Marcus Robinson is working to create a complete portrait of the World Trade Center reconstruction and the men and women behind it. 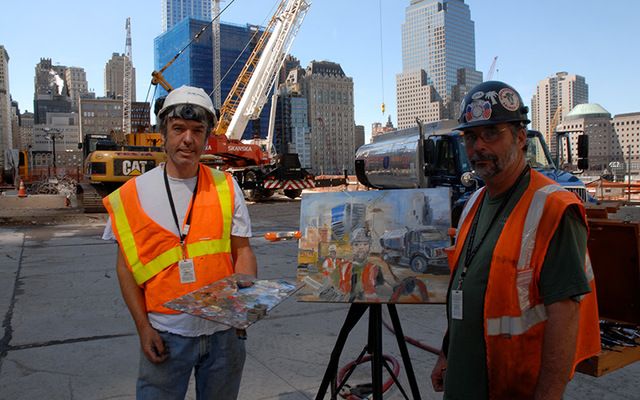 On site with Greg O'Brien, driver of the Century Petroleum truck who came every day to the site to refuel the cranes and the heavy duty machines. Marcus Robinson

For over a decade, the Belfast-born-and-raised artist Marcus Robinson has been carefully documenting the reconstruction of the World Trade Center through a range of vantage points and mediums.

He’s been on the ground at the bedrock level, using photography and time-lapse cameras to capture the rise of the new World Trade Center towers from the foundations up. He’s stood on the upper levels of One World Trade with a 35mm handheld camera days before the placement of the spire that would make it the tallest building in the Western Hemisphere. And at every point in between, Robinson has forged enduring bonds with the men and women carrying out the rebuilding of the 16-acre site that changed forever on the morning of September 11, 2001, portraying their humbling efforts in paintings, sketches and interviews.

Robinson last spoke with IrishCentral in 2014, just before his BAFTA-winning documentary “Rebuilding the World Trade Center” aired on the History Channel to coincide with the thirteenth anniversary of 9/11 and the completion of One World Trade.

The view from Robinson’s 66th floor studio in 4 World Trade Center has changed considerably since then, his work evolving along with it. The WTC Transportation hub, with its stunning Oculus, has opened; the floors of One World Trade have gradually filled with tenants; Tower 3 has topped out.

The world around him has changed, too. “When you start a project, as I did 15 years ago, you have no idea how the world is going to change,” he said during a visit to his studio last week.

“None of us could have imagined the geopolitical state that the world is in on both sides of the Atlantic. In a weird way, I think the timing and the spirit of this collection of paintings in particular, and the film, stand for something very important that creates a counterbalance to a lot of the insanity.” 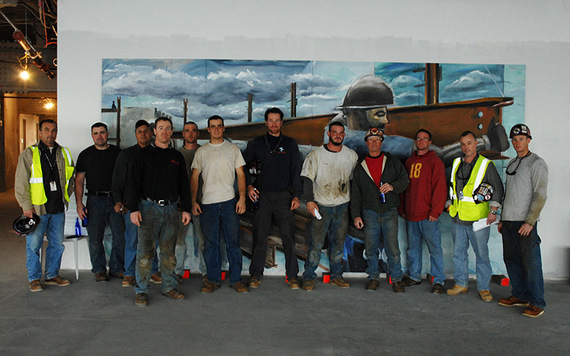 WTC ironworkers with the Man of Steel painting they inspired. Photo: Marcus Robinson

Surrounded by both paintings and views of the completed and continuing construction, the Belfast-man-turned-New-Yorker talked about his hopes for his work, the relationships he’s formed over the past decade, and his commitment to seeing this potentially 20-year-long project through to its conclusion. 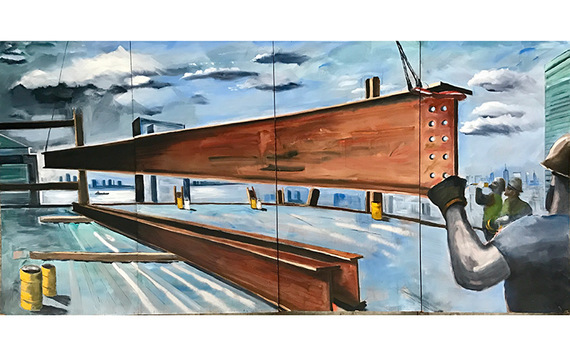 The Beam, by Marcus Robinson

Robinson first came to New York in 1975 when he was 15, on a trip with his parents. “It was a big change from Belfast, which was in the middle of the Troubles and a quite provincial city,” he recalled. “I knew that I wanted to live there one day, but I could never have imagined what it would have been 30 years later that finally brought me here to live.”

After 9/11, he was deeply moved by the idea of something most people see as being permanent disappearing suddenly and with such tragedy and then being rebuilt anew. Robinson’s background as an architectural photographer and urban transformation filmmaker, – he has chronicled a number of high-profile projects, including the construction of the London Eye – uniquely positioned him to take on the mammoth task of capturing what would likely be a long, complex and emotional build.

Bringing his project to fruition was no simple task, however, as potential investors balked at the open-ended timeline and Robinson was uncertain whether the Port Authority would grant him access to the construction site.

“Because I believed in it and felt I could do it, I just kept going. For years I was told I’d never be allowed to film here, about how strict the rules would be about who had access, but I persevered in just trying to get to know people, showing them photos of my work. And then suddenly they changed their minds as they were starting the ground work for Tower 1 and let me get started,” he recalled.

Read More: The World Trade Center and the indomitable spirit of the Irish

In particular, he credits the Port Authority, the construction workers he befriended, and Dara McQuillan at Silverstein Properties for being a champion of his work and helping him to secure a succession of sprawling raw studio spaces on floors of Tower 7 and Tower 4 that had yet to be rented. 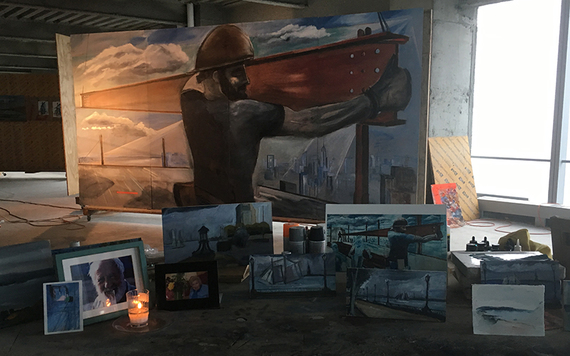 By and large, Robinson has funded his World Trade Center work himself, initially through proceeds from other projects he worked on previously or simultaneously, then additionally through the paintings and drawings inspired by the construction taking place there, which have caught the attention of everyone from major international collectors to the families of the very construction workers they depict.

The world got a chance to get to know those same workers when “Rebuilding the World Trade Center” premiered in 2013 on Channel 4 in the UK, and then aired in the US on the History Channel in 2014. Robinson’s stunning time-lapses and illustrations of the construction blended brilliantly with candid interviews with the men and women who were making it all happen. 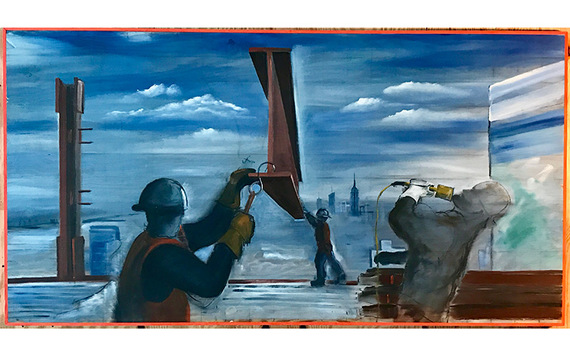 As journeyman iron worker Tommy Hickey says in the film, “It means a lot. He’s kinda doing it for us. To show people the hard work that we all do, not the people that put money in and put these buildings up financing them.”

And as he continues to carefully chronicle the construction, it’s this human element that stands out to Robinson even more.

“I think I’ve realized more and more about the human side of it, how important it is. Obviously the buildings are amazing, and the structures and the engineering. But the revelation of the humanity and the people behind the construction, that’s what most people who have seen the film seem to be fascinated by,” he said thoughtfully. 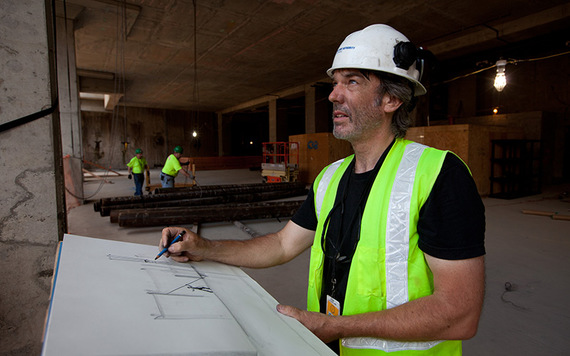 Looking out the full-length windows of his studio, he talked of “the incredibly clear-cut network through time of families going back through generations who have shaped with their bare hands the fabric of New York City.

“Like the great-grandfather of one of the guys who put in the top beams up there,” he said, gesturing to One World Trade, “he worked on the Empire State Building. A lot of the men and women had fathers or grandfathers who worked on the original Twin Towers.”

In a newer series of paintings, Robinson is zooming in on some of the workers he has befriended over the last number of years and working on individual portraits that focus on their diversity, the stories of where they come from. 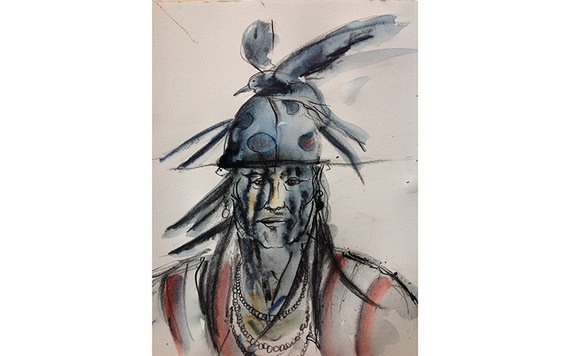 Also in the pipeline is a still-under-wraps project in collaboration with a well-known author working on a book about New York and, of course, the follow-up film to “Rebuilding the World Trade Center.” The first shot Robinson took for the project was in 2002, and if construction wraps in 2020 as it’s currently projected to, Robinson will be faced with the demanding task of fitting nearly 20 years of footage into one film. It’s a challenge he faces with immense pride and purpose.

“I think as the site nears completion, this thread that has gone through the years becomes more important. It will hopefully be a great source for celebration.” 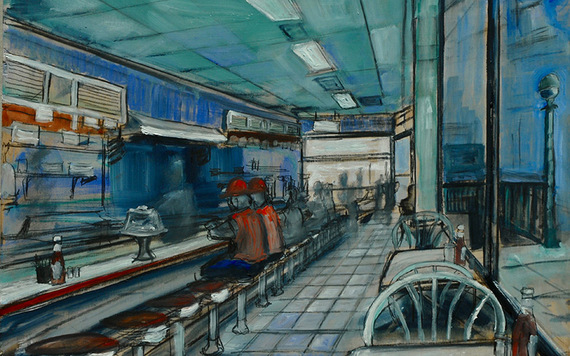 Breakfast at the Imperial Coffee House, by Marcus Robinson. His favorite old-style diner near WTC, it was recently demolished to make way for luxury condos.

For Robinson, the ultimate aim is “to tell a timeless and epic story about the humanity of the men and women working here and how that relates to what I think is the bigger picture: the diversity of New York City, and how that’s such a great example for the rest of the world.”

“One of the important things about this project is that it’s not directly about the events of 9/11 and it’s not about any of the political implications of 9/11,” he said. 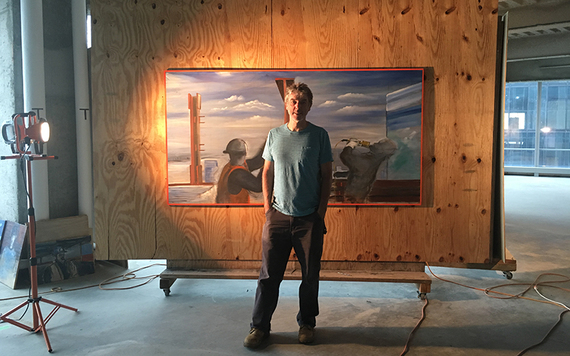 Robinson in his studio, with Flying Beam in the background. Photo: Sheila Langan

While he initially faced some pressure to include footage from the day in “Rebuilding,” Robinson was adamant that all scenes be from the construction on. Instead, he let the construction workers, ironworkers, carpenters and engineers he interviewed naturally tell the story. “By absence it creates a much stronger emotional space,” Robinson says.

In the same way that “Let the Great World Spin,” the 2009 novel of his fellow Irishman Colum McCann, set on the day in 1974 when French street artist Philippe Petit climbed a tightrope between the Twin Towers, managed to offer many New Yorkers a glimmer of catharsis that movies and books directly based on 9/11 could not, Robinson’s films and paintings are imbued with a distinctly powerful message of hope and unity. 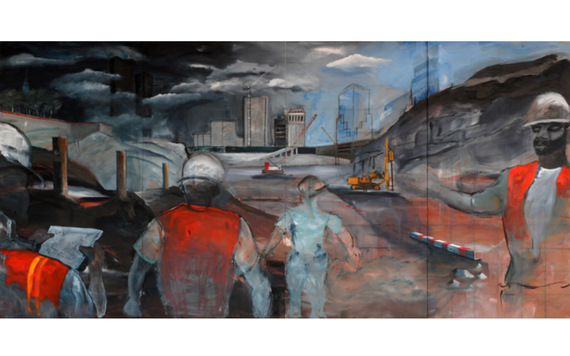 That is what he hopes the legacy of his work will be: “The quintessential spirit of a celebration of life and humanity, and the things that I love about New York. The pioneering spirit, diversity, and colorfulness of the people. Hopefully, that will live on.”

To view more of Marcus Robinson’s work, including from other projects, visit his website here.

Private studio tours can be arranged by emailing marcusrobinson@btopenworld.com