Irish Traveller sisters Lizzy and Caitlin are answering TikTok users' questions about their lifestyle and discussing the discrimination their community faces. 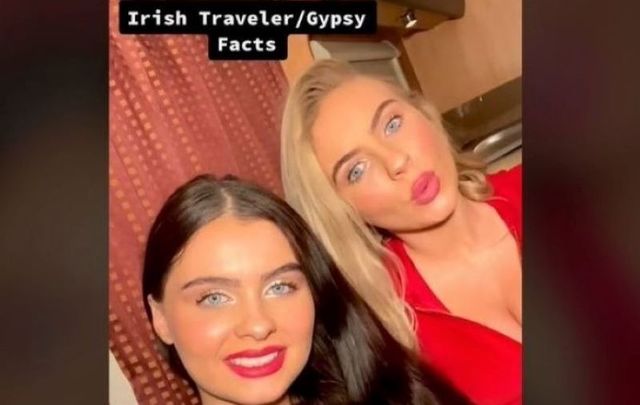 “We never realized how interested non-Travellers are in the Travelling community,” Irish Traveller sisters Caitlin and Lizzy say in a video that's been posted on both of their TikTok pages.

The sisters, who encouraged their many followers on TikTok (at the time of posting, Caitlin had 147.6k followers while Lizzy has 261.8k followers) to ask questions about Irish Travellers, are answering the queries based on their own experiences.

The results so far have proven to be an honest look at a community that can often be closed off to outsiders. Here’s what Caitlin and Lizzy had to say about a number of different topics and how they relate to Irish Travellers.

Based in England, the sisters’ mother is from Wales and their father is from Galway and lived in Dublin before moving to England. Both the sisters say it is a long time since they’ve visited Ireland.

The sisters said that they don’t personally take offense to any non-Travellers who want to live the Traveller lifestyle, but that varies from person to person within the community.

“Some [Travellers] will go to school, some won’t, but it’s more common for them not to go to school," says Caitlin, who, unlike many in her community, has completed primary and secondary school and is now enrolled in college.

“It just depends on the family if they want to send them to school - most likely no, because that’s not the line of work Traveller boys or girls rarely that they  want to go down.”

One user asked why Travellers opt to live in trailers rather than permanent houses. Caitlin responded: “Loads of Travellers still live in houses. I lived in a house for over a decade and then we’ve been in this site for over seven years.

“Some people just prefer to live in houses, some prefer to live in trailers. It’s more of the traditional thing because people like to travel, they like going to different places. It’s easier if you have a trailer rather than a house.”

In a separate video, Caitlin said: “Everyone thinks that we live in a field or something, but we don’t. We live on a piece of ground that, which has electricity, which has running water. It’s like a home, without a house.”

“Not all Travellers live in caravans,” Lizzy says.

Caitlin says she doesn't have a job and thinks that roughly one out of every 100 Traveller women go to work as work is mostly "down to the husbands." She added that the men in the Irish Traveller community work nearly every day.

In the Irish Traveller community, it’s not unusual for teenagers to get married. However, both Caitlin and Lizzy are currently single and have never had boyfriends.

“I know a lot of people who get married at 16 or 17,” Lizzy says in one video, “but I’m nearly 20 and I don’t see myself get married anytime soon, I don’t have a boyfriend or nothing.”

Lizzy and Caitlin also responded to some questions about the discrimination the Irish Traveller community experiences.

One person wrote "Every Traveller I've met, it was bad, robbed me of my money. Stay away from them."

Lizzy replied: "Sorry for your bad experience with the people that you've met, but I doubt one or two or three people - I don't know how many people you've met - is the whole population of Travellers, so you can't really tell people to stay away from them.

"It's like me saying 'stay away from Welsh people' because I had a bad experience with a Welsh person, you know what I mean? You can't go around saying things like that."

In another video, Lizzy explains that "it is not unheard of" for restaurants and businesses to close when they hear of a Traveller event, such as a wedding or funeral, getting booked in a town. "This is absolutely ridiculous," she says.

In another video, Caitlin reacts to the term "Pikie," which one commenter referred to them as. "I won't take the discriminating word Pikie. Unless you're a Traveller, you can't use that word. So many people use that and it's such a bad manner. It's so ignorant and rude."