In this episode of the Irish Stew podcast, Ireland’s Ambassador to the USA, Dan Mulhall, chats about his diplomatic career, Irish culture, and how Ulysses was a companion throughout his career. 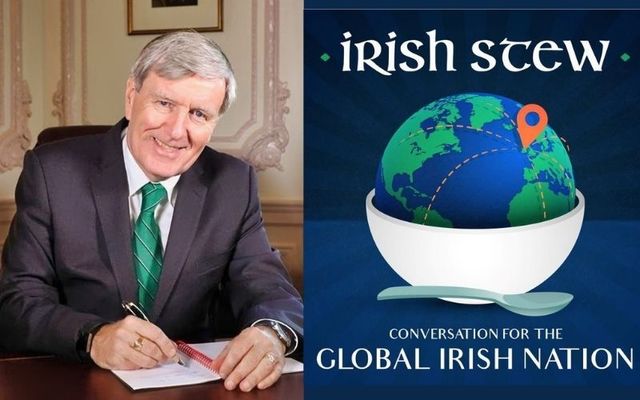 Season three of the Irish Stew concludes in a conversation with Ireland’s Ambassador to the United States and a guide to one of the classics of Irish literature through his recently published "Ulysses: A Reader’s Odyssey".

Hosts John Lee and Martin Nutty wrap up season three of the popular Irish Stew podcast by chatting with Ireland’s Ambassador to the USA, Dan Mulhall, by taking a look at his diplomatic career, how Irish culture was his calling card internationally, and how Ulysses was a companion throughout his career.

Daniel Mulhall from County Waterford took up duty as Ireland's 18th Ambassador to the United States in 2017. Before his move to Washington, Mulhall had a very global career, previously serving as Ireland's first Consul General as well as Ireland's Ambassador to Malaysia (2001-2005), Germany (2009-2013), and London (2013-2017).

The episode touches on Ireland’s ability to build bridges among countries, its seat on the UN Security Council, the global admiration for Ireland’s peacekeeping forces, and how culture is Ireland’s passport to the world today.

Along the way, Dan treats listeners with a reading from Ulysses paired with a passage from his book that explores that section. The episode ends with part of the closing chapter of Ulysses, “Molly Bloom’s Soliloquy,” brilliantly performed by actress Aedín Maloney, well known for her interpretation of this piece.

The Irish Stew Podcast will return for Season 4 in May but in the meantime, you can enjoy three bonus check-in episodes with past guests: mystery novelist Jack Byrne; former diplomat and now community leader Ted Smyth; and New Yorker cartoonist Liza Donnelly on the occasion of her new book Very Funny Ladies: The New Yorker’s Women Cartoonists.

You can listen back to previous Irish Stew Podcast episodes here.