In the latest episode of The Irish Stew Podcast, hosts John Lee and Martin Nutty chat with Dr. Cady Coleman, a former NASA Astronaut and a lover of Irish music and culture. 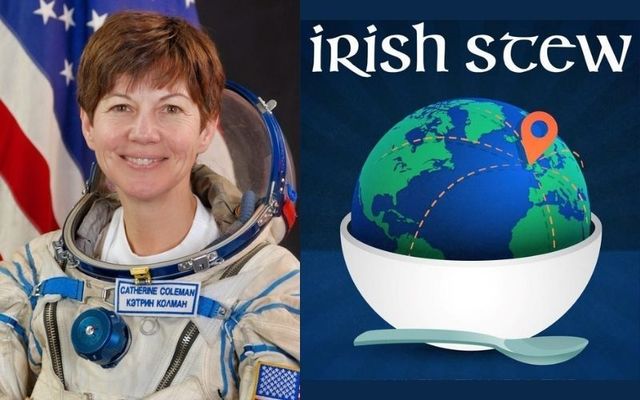 The Irish Stew Podcast reaches for the stars in their newest episode.

Hosts John Lee and Martin Nutty continue their conversations with the global Irish by sitting down and chatting with Dr. Cady Coleman, former NASA Astronaut, and Air Force Colonel.

In her conversation on the Irish Stew podcast, she explains how this unique viewpoint redefined home for her, which is not just a town or a city or a state but rather Earth as a whole.

Growing up in Virginia with a father who worked as a deep-sea diver, exploration was part of Cady's everyday life and as she puts it, living somewhere "weird and dangerous" was seen as normal.

While she was studying at MIT, Sally Ride, the first American woman to travel to space, came to visit. It was during this encounter that Cady thought that a career as an astronaut might be something she could pursue, "for me it was really a moment", she remembers.

Cady says she’s one-quarter Irish on both sides, but that it adds up to much more than half. When not exploring outer space, she’s exploring Irish music on the flute and tin whistle, even playing with the Chieftains.

On St. Patrick’s Day, she live-streamed herself playing a tin whistle from Paddy Moloney and an old wooden flute from Matt Molloy while floating in space aboard the International Space Station (ISS) as a way of sharing her cosmic experience with them and the entire Global Irish Nation.

The Irish Stew discusses her journey into the exclusive ranks of space travelers, the drama of the mission aborted six seconds before liftoff, the sights and sounds of the ISS, and “the grief in leaving” space and adjusting to life back on earth.

You can listen back to previous Irish Stew Podcast episodes here.

Up next on Irish Stew: Ireland’s ambassador to the United States Dan Mulhall discusses his very global Irish career in diplomacy and his new book “Ulysses: A Reader’s Odyssey” on the final episode of Season 3, dropping Mar. 14.