MacDara and Anna O Canaola have launched Gaelic Green Tongue to promote the Irish language by showcasing how much fun international students have while learning it. 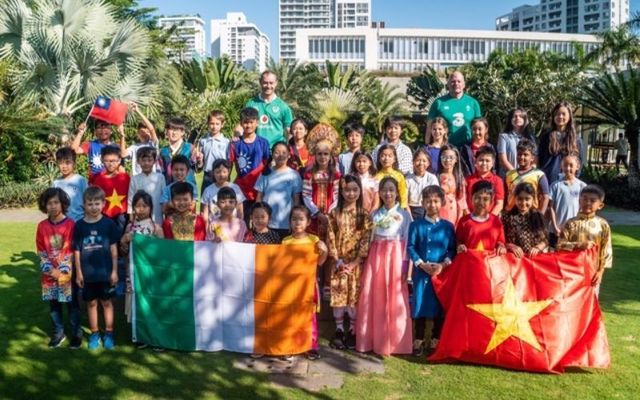 A new language project aims to protect the Irish language in Ireland by teaching a traditional Irish song to international students and highlighting how fun it is to speak Irish.

Editor’s note: Seachtain na Gaeilge is an international Irish language festival, the largest annual celebration of Ireland’s native language and culture in Ireland and around the world. Everyone is given the opportunity to enjoy the Irish language by participating in the festival, both native speakers, learners and those with a few words, by providing a calendar of entertaining and fun events for all interests and age groups. Find out more about their online events here.

Anna O Conaola, who is originally from Poland, and her husband MacDara, a native Irish speaker, have been teaching the traditional Irish song "Beidh Aonach Amárach" (There's a Fair Tomorrow) to primary school children in schools around the world.

The schools then record their best attempt at the song and submit it to Gaelic Green Tongue, an initiative launched by Anna and MacDara O Conaola to promote the Irish language in Ireland by showcasing how much fun international students have while learning it.

Irish school kids generally learn Beidh Aonach Amárach at a young age and Anna hopes that the international project will inspire people to reconnect with their native language.

"They [Irish people] can see that these kids are having so much fun with it and I hope that the fun will be infectious and inspire them to reconnect with Irish," Anna told IrishCentral.

Since it's @SnaGaeilge many of you might be learning some songs as Gaeilge, what about Beidh Aonach Amárach? Children across the world have been learning cúpla focal and have put them together to sing the song with their classmates, as part of the Gaelic Green Tongues project. pic.twitter.com/by8Dv4Xbxx

Anna said that her dream is for Ireland to become a bi-lingual country and said that she hopes that her kids never feel insecure about speaking Irish fluently.

"As a mother of Irish-speaking children, I want Irish to thrive, not just survive. I hope this project will make people pay attention to Irish a little more. This is important to me and close to my heart.

"I worry looking into the future with Irish because I don't know where it's going. Why would want to lose something that's your native tongue? It would be a great pity to lose Irish."

Schools in Poland, The United States, Sweden, Norway, Czech Republic, Latvia, Japan, and Vietnam have already submitted their best efforts for the project, while a school for the deaf in Zambia has also sent in a special sign language rendition.

Other schools in New Zealand, Iceland, and Italy are also preparing their own submissions, while a Mauri school in New Zealand also plans to take part.

Anna and MacDara have encouraged the kids, who are aged between six and 12, to have fun with the project.

"The most important thing for us was that they had fun learning it. We told them to do whatever brings fun for them.

"This was not just for us, it was for them as well and we wanted them to connect Irish with fun, so we encouraged them to dance with it and enjoy themselves. We told them that it doesn't matter if they mispronounce it a little. Who cares as long they're having fun?"

The project started in Anna's native Poland prior to the pandemic when her husband flew out to teach Irish to young Polish students. The couple decided to spread the project to other countries following the success of the initial classes but were forced to conduct further lessons online due to the pandemic.

Several schools around the world have been unable to take part in the project due to the pandemic as they are yet to return to in-person learning. However, Anna said that all schools will have time to submit their efforts as she believes that the project is never-ending.

"It's never going to be completed. It's going to go on and on and on. This is just the beginning. We would like to evolve it. We don't think of ending it ever."