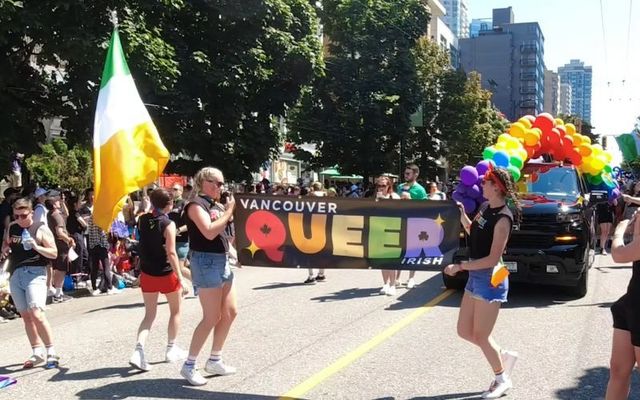 A still from "Bród." Damian McElgunn

Damian McElgunn, an Irish language filmmaker in Canada, has produced a new short film showcasing the Vancouver Irish community's first involvement in the city's Pride parade in June this year.

McElgunn, a Belfast native who moved to Vancouver more than 20 years ago, has produced the short Irish-language film "Bród", which celebrates the Irish community's involvement in the Vancouver parade.

The film follows Aaron de Paor, an Irish-speaking member of Vancouver's LGBTQ community, as he marches through the streets of the city during the parade.

Speaking in Irish, de Paor said the Pride parade was a "party to celebrate myself and my involvement in the LGBT+ community".

De Paor said the  Vancouver Queer Irish society was founded last year with a little help from the Irish Consulate, adding that the society is a "club" for members of the LGBTQ community.

"I would like for the people watching the parade to learn about our community," de Paor told the film.

"We are everywhere. Maybe your nurse or your doctor is part of the LGBT+ community."

He added that things have been "getting better and better" for the LGBTQ community over the past few years but said the "fight is not over".

A recruiter by trade, McElgunn was always interested in film and the Irish language and found himself with more time on his hands during the Covid-19 pandemic.

As the world came to a standstill, he took on a full-time course in documentary filmmaking, releasing "Idir Muir agus Spéir" (Between Sea and Sky) in March 2021.

The short film follows Canadian-born singer David McCallum, who became fluent in Irish while studying the language in Canada.

McElgunn didn't learn Irish when he was growing up due to a lack of access and opportunities. Instead, he became immersed in the language after he moved across the Atlantic, learning all he knows from Mike Kelly - a fluent Irish speaker from Co Kerry who lives in Vancouver.

He said the Irish language has allowed him to maintain a connection with Ireland through a community of Irish speakers.

Last year, he told IrishCentral that hopes to make a series of Irish-language short films exploring the lives of the Irish diaspora in Vancouver.

IrishCentral’s Book of the Month: “The Last September” by Elizabeth Bowen