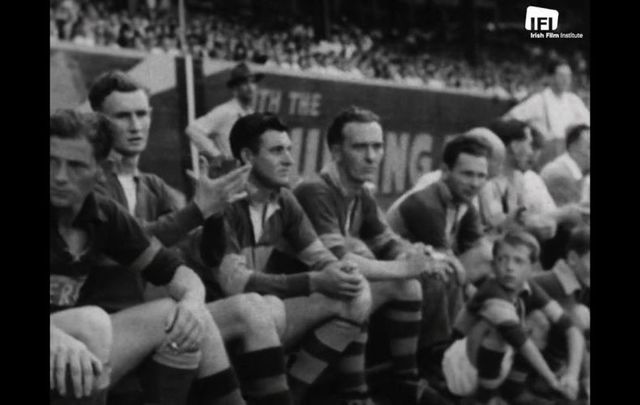 Scenes from the 1947 GAA All-Ireland Football final between Cavan and Kerry that was hosted in New York. Irish Film Institute

The GAA Collection from The Irish Film Institute is available to watch for free on the IFI Player for a limited time only.

The Irish Film Institute has launched its new GAA Collection on the IFI Player. Featuring commentary from the legendary Micheál O’Hehir, the collection covers All-Ireland football finals from 1947 to 1959 and hurling finals from 1948 to 1968.

Commenting on the release of The GAA Collection, which features more than 25 historic reels, IFI Director Ross Keane said: “The films in this collection depict a remarkable ambition to capture two of the fastest field sports on 16mm film, and allow us to experience some of the earliest footage of Gaelic football and hurling.

"The IFI is proud to provide access to the rich heritage of our national games to audiences across Ireland and the world via the IFI Player."

From the 1940s to 1970s, the National Film Institute, now the Irish Film Institute, produced and distributed a number of educational and entertainment films, the best known of which was a series of GAA football and hurling All-Ireland final highlights from 1948 to 1979. The matches were filmed by some of Ireland's most legendary cameramen including Bob Monks, Brendan Stafford, Vincent Corcoran, and George Fleischman.

Alongside the terrific sports footage, the films also give a fascinating insight into the social history of the time. The high-profile appearances of Catholic archbishops are notable, as is their role in starting the games.

The films also include pre-match footage of the areas surrounding Croke Park as fans make their way to the game, as well as footage of 1940s O'Connell Street. The footage from 1959 onwards is also hugely important as it was the first time the matches were filmed in color; RTÉ did not start broadcasting in color until 1969.

Read More: WATCH: When a Co Kerry parish introduced a tax on cows in 1962

Below, courtesy of the Irish Film Institute, you can watch highlights of the 1947 GAA All-Ireland Football Final which was held in New York.

IFI says: “In 1947, as a commemoration of the centenary of the Great Famine and to revitalise Gaelic games in America, the All-Ireland Football Final was held in New York. The game was played in the Polo Grounds, home of the New York Giants baseball team. The scorching conditions were difficult for players and the unusually shaped pitch was bone dry.

“Kerry started much better and built up an eight-point lead. However, the switch of Cavan’s P.J. Duke from midfield to his more customary wing half-back position would transform the game in Cavan’s favour. Among the leading Kerry scorers were Batt Garvey and Tom Gega O’Connor, while they also had a formidable defence including goalkeeper Dan O’Keefe and full-back Joe Keohane. Cavan’s Peter Donohue scored eight points and was described as the ‘Babe Ruth of Gaelic football’ by the New York press. Other Cavan heroes were legendary captain John Joe O’Reilly, Mick Higgins, and Tony Tighe.”