How to roast a Thanksgiving turkey, with tips from our Irish chef!

Let our Irish chef teach you how to perfectly roast a turkey, just in time for Thanksgiving Day. 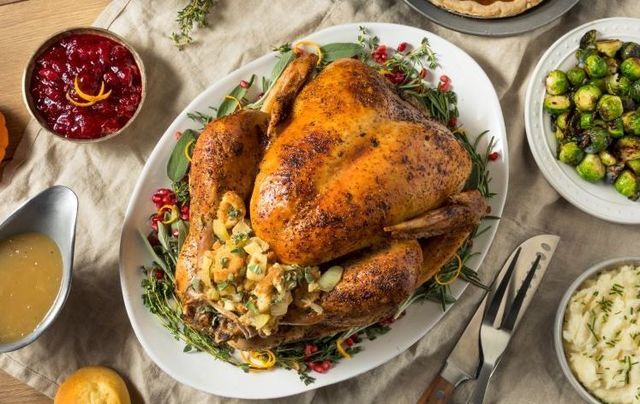 Thanksgiving Day is quickly approaching! Below, learn why we eat turkey on Thanksgiving and then let our Irish chef teach you how to perfectly roast it.

Although turkeys are the main cuisine of today's Thanksgiving celebrations, these birds were not the most popular centerpieces on the first Thanksgiving tables.

In 1621 when the Plymouth colonists and Wampanoag Indians celebrated the first Thanksgiving, they were gobbling up many more foods than just turkey.

Since lobster, goose, duck, seal, eel, and cod were plentiful during this time, these foods were most likely the main courses of this first feast. Deer meat and wildfowl are the only two items that historians know, for sure, were on the menu for this autumn celebration.

So how did the turkey become the main mascot of modern-day Thanksgiving if we don't know for certain that turkeys were at this first feast?

One story tells of how Queen Elizabeth of 16th century England was chowing down on roast goose during a harvest festival.

When the news was delivered to her that the Spanish Armada had sunk on its way to attack her beloved England, the queen was so pleased that she order a second goose to celebrate the great news. Thus, the goose became the favorite bird at harvest time in England.

When the Pilgrims arrived in America from England, roasted turkey replaced roasted goose as the main cuisine because wild turkeys were more abundant and easier to find than geese.

Now that you know a bit more about Thanksgiving turkey's history, it's time to get cooking!

Step-by-step instructions on how to roast a stuffed or unstuffed turkey.

To prepare the turkey for roasting:

Do not stuff the turkey until immediately before roasting. When ready to roast the turkey, rinse the outside and cavities of the bird under cold, running water. Cut away and discard any fat remaining on the bird.

Place the turkey on several layers of paper towels to drain. Using additional paper towels, pat the outside and cavities dry. Sprinkle cavity liberally with salt and pepper.

To stuff the turkey, stand the bird on its tail end in a large bowl and using a tablespoon, stuff the neck cavity loosely with dressing. Pull the neck skin over the dressing and fasten it to the body with a poultry skewer.

Turn the bird and place the neck end in the bowl; stuff the body cavity loosely with dressing. It is important to stuff the dressing fairly loosely in the bird because dressing expands during cooking.

Remove the turkey from the bowl and lay the bird, breast-side up, on a piece of waxed paper or directly on a clean work surface. Pull the legs close to the body and tie the ends together with cotton string.

If the tail has been left on the bird, tie the legs to the tail to partially close the body cavity. Some frozen turkeys are packed with a metal clamp to secure the legs, in which case it is not necessary to tie the legs with string. Fold the wings under the bird to provide a platform for roasting.

Place the turkey, breast-side up, on a wire rack in a shallow roasting pan. Brush all the exposed surfaces with vegetable oil. Sprinkle liberally with your choice of herbs, spices, salt, and pepper.

Also, a standard meat thermometer makes it possible to know how close the turkey is to being fully cooked -- an aid in timing preparation of the remainder of the meal.

To roast the turkey:

Preheat the oven to 325 degrees F.

Cover the turkey loosely with extra-heavy aluminum foil, leaving space between the bird and the foil. Lightly tuck the foil around the front, back, and sides of the bird. Do not add water to the pan. Roast the turkey until the meat thermometer reaches 180 degrees F. and the juices run clear.

Follow the instructions above, omitting the dressing (stuffing). Roast the turkey until the meat thermometer reaches 180 degrees F.

Remove the aluminum foil about 30 minutes before the turkey is done to complete the browning of the bird.

When done, remove the turkey from the oven and place it on a serving platter or carving board; cover loosely with aluminum foil and let it stand 10 minutes before carving.

Remove all the dressing from the neck and body cavities before carving the turkey. Pour the gravy into a gravy boat and pass at the table.

Giblet gravy is a classic accompaniment to the traditional turkey meal for Thanksgiving or any special occasion. Don't toss those giblets in the trash! They add a lot of flavor to this easy gravy.

Add liver and cook 15 minutes longer. Strain giblet broth through a sieve into a large bowl.

To make gravy, remove the rack from roasting pan. Strain pan drippings through sieve into a 4-cup measuring cup or medium bowl.

Add 1 cup giblet broth to hot roasting pan and heat to boiling, stirring until browned bits are loosened from bottom of pan; add to drippings in measuring cup.

There are a couple of myths told each year at my house on Thanksgiving. One is that the chef won’t get gee-eyed and kick everyone out of the kitchen. The other is that there's a natural chemical in turkey called tryptophan that makes you sleepy after the meal. While the first myth stems from wishful thinking on my wife’s part, the sleepy-turkey myth lingers around each year because it sounds so logical.

Alas, it is only marginally true. What is, in fact, making you feel sleepy after Thanksgiving dinner is any combination of booze, bad conversation, family members and a carbohydrate-heavy meal, but not the turkey itself.

Tryptophan is an essential amino acid crucial for good health. Human bodies need tryptophan to build certain kinds of proteins. There is a sleep connection, though. The body uses tryptophan in a multi-step process to make serotonin, a neurotransmitter in the brain that helps regulate sleep.

Turkey does have tryptophan, but all meat has tryptophan at comparable levels. Cheddar cheese, gram for gram, has more. While cheddar isn't the most exciting cheese in the cheese cellar, no one connects it with sleep. Turkey gets singled out for no other reason than being eaten during the biggest meal of the year.

AND FINALLY… A lady was picking through the frozen turkeys at the grocery store, but couldn't find one big enough for her family.

She asked the stock boy, 'Do these turkeys get any bigger?'

The stock boy answered, "No ma'am, they're dead."