Reconnecting with Ireland and its history of cooking

Exploring Ireland's Green Larder from cooking over a fire to chats with historians and making butter. 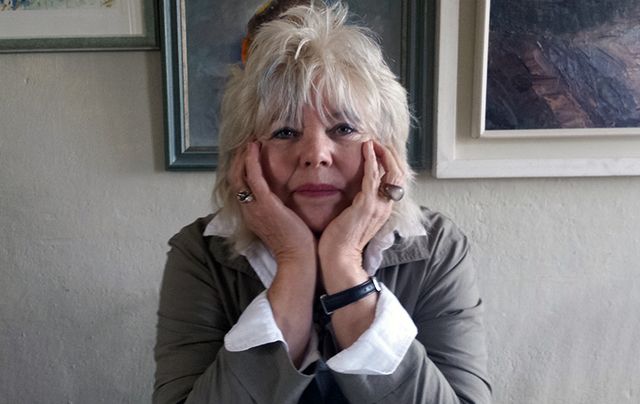 A few years before the turn of the millennium, I made a life-changing decision to move from a wonderful job, editing Country Living magazine in the heart of London, to the backwaters of rural Ireland.

I found a place not far from where my father grew up. The fact that the house hadn't been lived in for 17 years didn't faze me, nor the absence of doors or windows. There was nothing, I fondly believed, that couldn't respond to a little renovation and some tasteful shade of paint. No electricity? That would be easily fixed. No running water? Simple! Sink a well. My spectacles were as rose-tinted as they could possibly be.

Directing operations from Soho, I got some jobs done, then could wait no longer. Handing in my notice, I instructed the removers to transport my old life to a charming spot beside the River Shannon and I followed after. Until the electricity was brought in, I fried sausages over an open fire, like a cowboy, and sat in the house looking at the sun setting in the west for a full hour at a time, soaking up the peace and beauty of my surroundings. No planes flew overhead, there were no parking meters in my little town, and I was welcomed by my neighbors.

It was in those early days that I became fascinated by the one feature of the house that had remained intact - the crane. This metal arm swiveled out from a side wall of the vast chimney dominating the room known as the big kitchen. To the side of the fireplace was a deep pit, intended for the ashes of the previous fire, and a little seat was built above this ash hole for the comfort of the oldest person in the house to sit on and be warm.

Cooking in rural Ireland was done over turf fires made directly on the beaten earth of the fireplace, and the size of the hearth meant that several small fires could be set down. Pots for boiling different ingredients were suspended above these fires by means of straps and chains that hung down from the crane. When the woman of the house was feeding a tribe (a family with15 children was not unheard of), she needed to cook in massive pots and would have been unable to lift the heavy load without the aid of the crane. I couldn't wait to acquire some old pots and griddles and start experimenting!

It was an enchantment to make a loaf without yeast and to bake it inside a cast iron, lidded pot known as a “bastable”. Soda bread uses sour milk or buttermilk and bicarbonate of soda to bring about a chemical reaction that causes the bread to rise with no need of proving or dealing with yeast.

I became deeply fascinated not only by the old ways of cooking, but also by the stories and myths that accompanied food in Ireland and by the differences I remarked between here and where I grew up. Where were the savoury pies? Brought up in the north of England, I had known pork pies and meat and potato pies from childhood. No sign of them in Ireland, other than the Dingle pie, made with mutton and almost extinct.

Why, when the country is surrounded by water and is criss-crossed by myriad rivers and streams, did Irish people seem to avoid fish and shellfish? And how had Ireland managed to hold on to its butcher’s shops, when they were an endangered species back in the UK?

I began to count off the pluses and minuses. Fabulous beef, world class oysters, glorious bread, golden country butter and a keen interest in the potato. On the other hand, back in 1999, I couldn't find leeks or garlic locally, and when I bought some asparagus (the first time it was on sale, I suppose) the girl on the checkout asked me what it was. There was no shame in that, of course. Millions in Ireland had gone through such terrible poverty for centuries that staying alive took all their courage and ingenuity. There was absolutely no room for anything that might be classed as a luxury!

At that point, I began work on my book, Ireland's Green Larder. It's a lively history of Ireland through food and drink, not a cookbook, although there are recipes dotted in it here and there. For two years, I traveled the length and breadth of Ireland, visiting sites of interest, such as the Ceide Fields in County Mayo, where they have discovered the oldest field system in the world - a thousand years older than the Pyramids!

I interviewed food producers, delved into archives, checked out folklore records and met historians. In County Tipperary I watched as butter was made and in County Offaly I scratched some happy free range pigs under their chins!

In the book, I tell how my friend Jane and I spent a day experimenting with ancient methods of cooking. We wrapped a salmon in cabbage leaves and buried it in hot embers. When the outer leaves were charred, we unwound our parcel and discovered that the skin conveniently came away, revealing a glorious pink salmon as juicy and perfectly cooked as you could wish for! On that same day we made oatcakes, baked some soda bread and cooked eggs (piercing their shells for safety) in the hot turf embers. The egg yolks were creamy and tasted faintly smoky - quite delicious!

I'm delighted to say that the book is now in production with Unbound, a London publishing house, and will be published in the spring of 2018. But a special first edition will be printed before the book goes into the shops and that will bear the names of all the people who have pledged to buy the book. The whole thing has been done by crowd-funding, a modern form of the subscription that Charles Dickens relied on when he was writing Oliver Twist and all his other novels!

If you want to read an outline of the book, plus an extract, you can just click here.

If you love Ireland, you'll meet so many people in these pages, from saints to soldiers and from whiskey distillers to cattle rustlers!

It will be something special to have your name printed in this big book with its specially commissioned illustrations and would make a marvellous gift to pledge in someone else's name.

Go for it! It would be just thing for St Patrick's Day next year!

* Born near Manchester, Margaret Hickey is the former Deputy Editor of Departures, a London-based travel magazine and former Food and Drink Editor at Country Living. She also pursued her freelance writing career, contributing articles on food, drink and travel to most of the British national press, including The Financial Times, The Guardian and The Times.

In 1999, she moved to Ireland to complete a book commissioned by UK publisher Kyle Cathie. Irish Days, a collection of oral histories, was published in 2001 and received national coverage in both Ireland and the UK.

She is currently Vice Chairperson of Portumna Arts Group, which runs Shorelines, an annual arts festival recognised by the Arts Council. For many years she has been a regular judge at the Strokestown International Poetry Festival.