Margaret Gallagher’s home has no TV, phone, running water, or electricity, but she wouldn’t have it any other way. 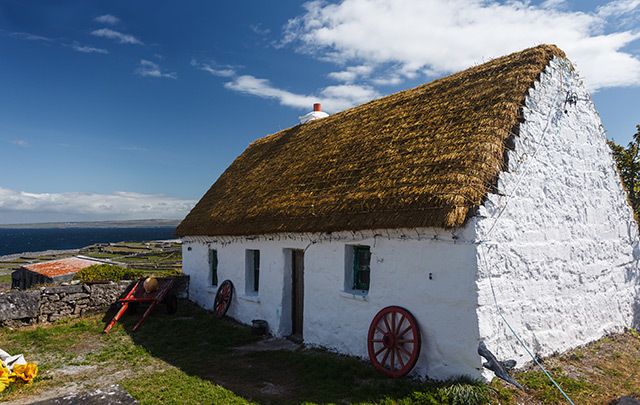 Margaret Gallagher’s home has no TV, phone, running water, or electricity but she wouldn’t have it any other way. iStock

Could you live in a proper Irish traditional thatched cottage with no electricity or running water?

Ireland has long been applauded for its famous hospitality, but Irish pensioner Margaret Gallagher argues that her almost three-centuries-old thatched cottage is one of the last refuges of the true, old-fashioned spirit of Irish hospitality at its finest.

In an interview with the Irish newspaper, 74-year-old Gallagher revealed the ins and outs of her life, avoiding modern phenomenon such as social media, phones, TV, and even electricity in her 280-year home in Belcoo, Co. Fermanagh, first purchased in the late 19th century by her grandfather.

"There never was a time for transition to something more modern. I was born into this house on January 26, 1942, at five past nine on a Monday morning. My mother died when I was 10, my father died in 1980. His father bought this house in 1887, and my take on it is if it was good enough for them, then it's good enough for me," she said.

Setting up a fire to keep the place warm, carrying in water from a nearby well, and carrying in turf and logs to keep the fire going for the rest of the day are chores that must be all carried out first thing in the morning, and heavy preparations must be made in the case of cold weather, but it's obvious that Gallagher wouldn’t swap out her lot for anybody else’s in the world.

"I tell you, I carry some turf, I also carry some water. I was born under Aquarius, but nobody carries more water than I do,” she continues.

"People come to look at me as if I am an endangered species. That's grand, I am very endangered. But it's for real. I am not here to please an American tourist who is oohing and aahing, looking at me, saying: 'I thought people in this lifestyle would have a long black skirt on them'. I say: 'Possibly, but if you see the path I have down to the well, a long black skirt would need a washing'."

We visit Margaret Gallagher, whose home and #lifestyle has remained unchanged since 1887 https://t.co/JZGTPqZIDv pic.twitter.com/nJBjyJ25pw

Nestled above the towns of Belcoo and Blacklion, the Fermanagh cottage has never had running water or electricity, but Gallagher insists it's simply a question of making sure she has enough water and fuel stockpiled to stop disaster from striking, even when the worst of winter weather strikes.

"I have a wireless radio and listen to the news headlines on that. I brought in plenty of logs and turf and carried in plenty of water, so I was well equipped for it,” the 74-year-old explains.

“I have enough water now I could bathe the country for a small charge. I had to get up very early the other morning to knock the snow off the roof with a pole. If you don't do that it can damage the roof. It came down with a crash.

"With a house like this, you have to prepare for what's coming."

The cottage itself is grade-two listed, meaning that it is a building of special interest that should be preserved, looking almost exactly as it would have done when Gallagher’s family first made the purchase.

"This house makes a statement. It sits very comfortably on the landscape, even though I am surrounded by beautiful new homes. It says that you can't forget about your past, you bring it with you proudly into the future," she told the Independent.

The front door of the cottage is normally left open to help the air circulation in the house, while double oil burners are reflected by mirrors behind them, brightening the house even further.

Although she lives alone in the house, Gallagher claims she never suffers from any form of isolation, arguing that more solitude is what many of us need in our lives, cutting off from our phones and social media for a little while.

Good morning, Twitter. A lovely story of life as it used to be - & still is for some. ☺️ https://t.co/yH6Deb7DPz

“A  period of silence or solitude should be encouraged in the house," she adds explaining that as an avid reader she gets by without a TV set.

"By God, there was a welcome,” she says of the old Irish open-door policy.

“There was no intrusion of a television, not that there is anything wrong with a television. I have a wind-up radio which I listen to in the mornings to get the time, the day, the date and the news headlines. The problem with televisions and everything else, there doesn't seem to be an off button ever used.

“We were taught so much long ago from the monks of old, particularly the monks who lived on Cleenish Island, about solitude and hospitality. But that is gone now. When you talk to someone they are on a mobile phone or an iPad, there is no eye contact. I do think we are slipping on hospitality. I think the day of the open door is gone."