These spiced and fruity sweet treats, traditionally eaten during Lent, are said to have mythical properties 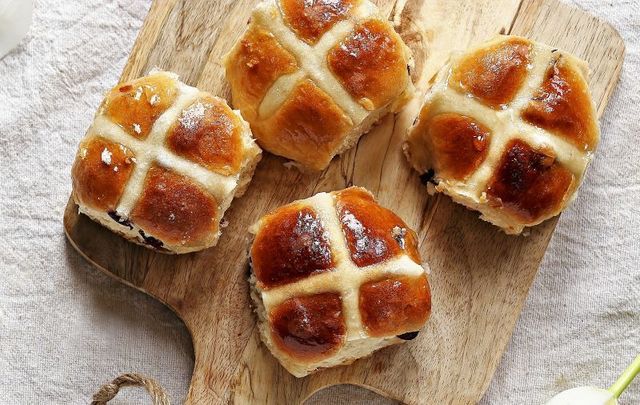 These spiced and fruity sweet treats, traditionally eaten during Lent, are said to have mythical properties

Hot cross buns are traditionally baked to be eaten during Lent, the 40 days before Easter. The bun acquired mythical properties over the centuries and early literature reveals that the hot cross bun was also known as the Good Friday Bun.

The most famous story says that the origins of the hot cross bun date to the 12th century when an English monk was said to have placed the sign of the cross on the buns to honor Good Friday. Throughout history, the bun has received credit for special virtues, among them that of ensuring friendship between two people sharing a bun. An old rhyme states, "Half for you and half for me, between us two, good luck shall be."

Another tradition holds that a hot cross bun should be kept hanging from the kitchen ceiling from one year to another to ward off evil spirits. Healing properties were also attributed to it. Gratings from a preserved bun were mixed with water to provide a cure for the common cold.

There are loads of delicious ways to eat this legendary treat: you can slice them, toast them and butter them. I love them toasted with real butter and strawberry jam.

This recipe is an old family one and it makes about 10 buns - but we always double it up.

Put the flour, salt and mixed spice in a bowl, and give them a quick whisk to mix. Rub in the butter to the flour mix until it resembles fine breadcrumbs. Add the yeast, sugar, beaten egg and milk, and stir together into a soft dough.

Knead for 10 minutes until the dough is smooth and elastic. If you are using a mixer to make these buns give it five minutes on low with the dough hook. Add in the dried fruit and the grated orange rind and knead for another minute.

Roll out the mix slightly and cut the dough into 10 pieces. Roll these into balls on the table using the flat of your hand and place on a baking sheet or tray. Leave their own width again between each bun so they will have room to rise.

To make the cross mix 1 cup flour with about 3 tablespoons of cold water to make a basic soft dough. Roll it out really thin and cut into little strips. Dampen with a little water and stick to the top of each bun. Take a length of plastic wrap and brush with a little cooking oil. Place this loosely on top of the buns (oiled side down) and leave in the kitchen to double in size - about 20 minutes depending on the weather and the warmth of the room.

Hot cross buns were traditionally brushed with a sugar and water glaze when they're still hot, but I prefer to brush them with local honey

Read More: How to use Kerrygold butter to make delectable Irish scones

What recipes will you be trying out this Easter? Let us know in the comments!