Start your Easter Sunday off on the right foot with this yummy eggs benedicts with hollandaise sauce recipe from our Irish chef! 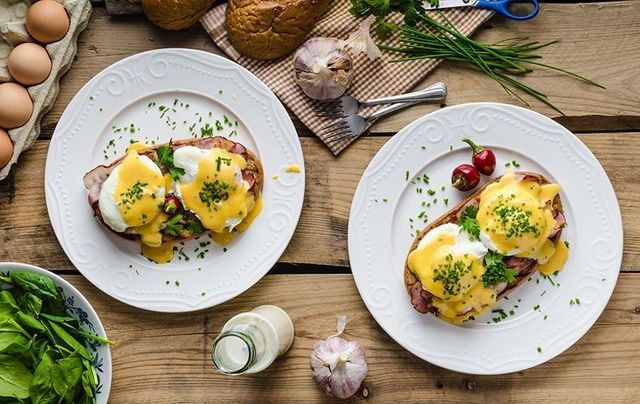 Looking to round out your Easter Sunday brunch menu? Give this Eggs Benedict with hollandaise sauce recipe a try!

There are differing accounts as to the origin of eggs Benedict.

In an interview in the "Talk of the Town" column of The New Yorker in 1942, the year before his death, Lemuel Benedict, a retired Wall Street stockbroker, claimed that he had wandered into the Waldorf Hotel in 1894, hoping to find a cure for his morning hangover, and ordered "buttered toast, poached eggs, crisp bacon and a hooker of hollandaise".

Oscar Tschirky, the maître d'hôtel and legendary "Oscar of the Waldorf", was so impressed with the dish that he put it on the breakfast and luncheon menus but substituted ham and a toasted English muffin for the bacon and toast.

Craig Claiborne, in September 1967, wrote a column in The New York Times Magazine about a letter he had received from Edward P. Montgomery, an American then residing in France. In it, Montgomery related that the dish was created by Commodore E.C. Benedict, a banker, and yachtsman, who died in 1920 at the age of 86. Montgomery also included a recipe for eggs Benedict, stating that the recipe had been given to him by his mother, who had received it from her brother, who was a friend of the Commodore.

Mabel C. Butler of Vineyard Haven, Massachusetts in a November 1967 letter printed in The New York Times Magazine responded to Montgomery's claim by correcting that the "true story, well known to the relations of Mrs. Le Grand Benedict", of whom she was one, was: Mr. and Mrs. Benedict, when they lived in New York around the turn of the century, dined every Saturday at Delmonico's. One day Mrs. Benedict said to the maître d'hôtel, "Haven't you anything new or different to suggest?"

On his reply that he would like to hear something from her, she suggested poached eggs on toasted English muffins with a thin slice of ham, hollandaise sauce, and a truffle on top. Whoever came up with it may still be a mystery, but the fact is it is one of the most popular brunch items for brunch.

Pour enough water into 2 large skillets to reach a depth of about 3 inches, and divide the vinegar between them.

Bring both skillets to a gentle simmer over medium heat.

Crack an egg into a cup and carefully slide it into the hot poaching liquid. Quickly repeat with all the eggs.

Poach the eggs, turning them occasionally with a spoon, until the whites are firm, or to the desired degree of doneness, about 3 to 5 minutes.

Using a slotted spoon, remove the eggs and transfer to a kitchen towel. Lightly dab the eggs with the towel to remove any excess water.

While the eggs are poaching, melt the butter in a large skillet over medium heat.

Add the Canadian bacon and cook until heated through, about a minute on each side.

To serve, toast the English muffin halves and divide them among 6 warmed plates.

Top each half with a slice of Canadian bacon, and set an egg on top.

Spoon the hollandaise sauce over the eggs and garnish with the chives.

In a medium pan, completely melt the butter over medium-low heat.

Remove from the heat and set it aside for 5 minutes.

Skim and discard the white foam that rises to the surface of the butter.

Carefully ladle or pour the clear golden butter into a container with a pouring spout.

Take care not to add the milky solids and watery liquid at the bottom of the saucepan.

Set the butter aside in a warm spot.

Pour enough water into a medium saucepan to reach a depth of about 2 inches. Bring to a gentle simmer over medium heat. In a medium heatproof bowl, combine the egg yolks and the cold water.

Whisk until the yolks are light and frothy.

Place the bowl over the saucepan of simmering water and whisk constantly and vigorously until the yolks are thickened and light, about 3 to 4 minutes. (If the eggs begin to scramble, or the mixture is cooking very quickly or gets too hot, remove the bowl from the heat and whisk to cool).

Remove the eggs from the heat and whisk for 30 seconds to cool slightly.

Remove the saucepan from the heat and set the bowl over the hot water.

Slowly drizzle the butter into the eggs while whisking constantly.

Whisk in the lemon juice, salt, and pepper, to taste. (If the sauce is very thick, add a few drops of warm water to adjust the consistency so it is creamy and light.)

Serve immediately or keep the hollandaise sauce in a small bowl set over warm, but not hot water, for about 30 minutes or in a warmed thermos for about an hour.

AND FINALLY... A man walks into a cafe desiring breakfast. The waitress seats him and he asks what the specials are. She tells him the special is Eggs Benedict. He orders the special. A little later, the waitress comes out with the Eggs Benedict, served on hubcaps. Surprised, he asks why the hubcaps instead of regular plates. Her response? "There's no plate like chrome for the Hollandaise." (I'll get me coat!)

A man walks into a cafe desiring breakfast. The waitress seats him and he asks what the specials are. She tells him the special is Eggs Benedict. He orders the special. A little later, the waitress comes out with the Eggs Benedict, served on hubcaps. Surprised, he asks why the hubcaps instead of regular plates. Her response? "There's no plate like chrome for the Hollandaise." (I'll get me coat!)