Learn all about the tradition of hot cross buns in Ireland before Easter Sunday. 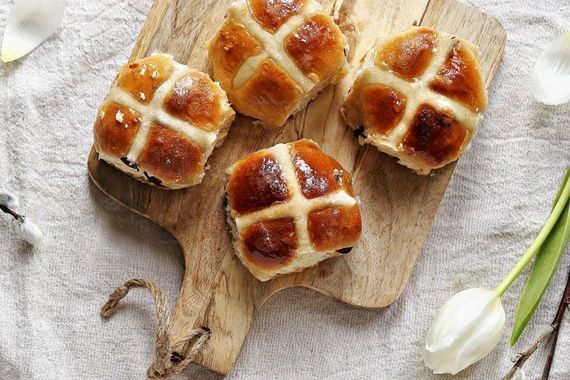 Learn all about the tradition of hot cross buns in Ireland before Easter Sunday.

Hot cross buns are traditionally more of an English Easter tradition than an Irish one, but the tasty sticky bread treats are just as popular in the Emerald Isle as they are across the Irish Sea.

One of the most famous foods associated with Easter, hot cross buns are typically baked and consumed on Good Friday to break the fast of the holy day.

The origins of this very English custom are not entirely clear.  It has been suggested that hot cross buns originated in the pagan cult that preceded Christianity in Britain.

But the earliest historical mention of them is traced to a 12th century English monk who is said to have marked buns with the sign of the cross in honor of Good Friday.  A 14th-century record tells how a monk of St. Albans distributed spiced cakes to the needy on Good Friday, inaugurating an annual tradition, though he carefully guarded his recipe.

In Ireland, there are some superstitions surrounding the Good Friday tradition of baking hot cross buns.

If hot cross buns were baked on Good Friday and kept until the next year, they were considered to protect a home from fire.

In the Middle Ages, hot cross buns were believed to have powers of protection and healing.  People would hang a hot cross bun from the rafters of their homes for protection through the coming year.

If someone was sick, some of the dried buns would be ground into a powder and mixed with water for the sick person to drink.

Unlike common bread, hot cross buns supposedly do not grow moldy, and stale buns are retained for all kinds of purposes:  grating into medicines, as charms against shipwreck, keeping rats out of corn, and as a general "good luck" talisman for the household if hung from the ceiling on a string.

In the reign of Elizabeth I, when Roman Catholicism was banned, making the sign of the cross on the buns was regarded as popery and the practice was banned.  But neither Church nor State could suppress the popular custom, so legislation was enacted to limit consumption of hot cross buns to legitimate religious occasions such as Christmas, Easter, and funerals.

The familiar nursery rhyme, "Hot cross buns," derives from the call of the street vendors who sold them:

One a penny, two a penny,

If you haven't any daughters,

Give them to your sons!

One a penny, two a penny,

If you haven't got a penny

A ha'penny will do.

If you haven't got a ha'penny, 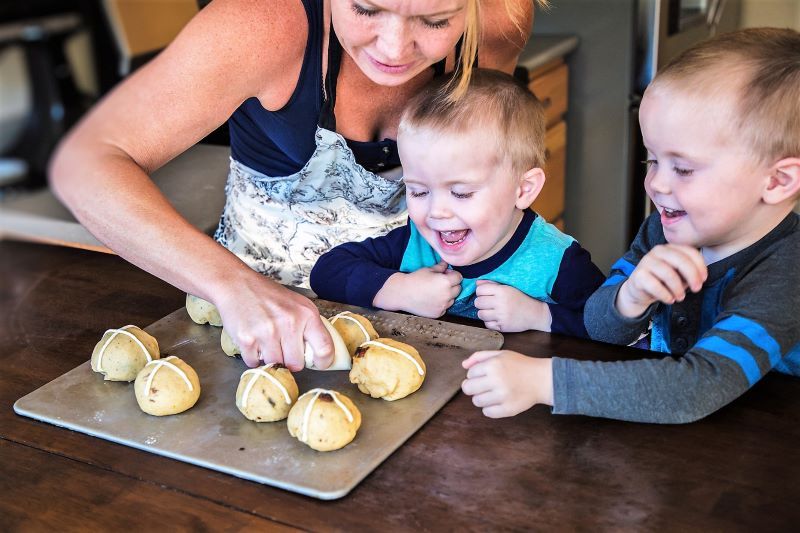 Pour scalded milk over butter and sugar, stirring to dissolve. Cool to lukewarm. Add the yeast mixture and eggs. Mix well. Gradually add the flour and salt, reserving a small amount of flour to dust raisins.

Add spice and floured raisins to the dough and knead in thoroughly. Place in a buttered bowl, cover and let rise until doubled. Punch the dough down and turn it out onto a floured board. Shape dough into 30 buns and place on buttered cookie sheets.

Cover and let rise 30 minutes, then very carefully press the shape of a cross into each bun, using a spatula or the back of a knife. Bake in a 375°F oven for 10 minutes. Reduce heat to 350 degrees and continue baking until buns are browned, about 10 to 15 minutes longer. Frost either the entire bun or just the shape of the cross.

What do you get when you drop boiling water down a rabbit hole?

What recipes will you be preparing for the Easter holiday? Let us know in the comments!