These are the most popular breakfasts in Ireland

Celebrate Better Breakfast Month with one of these six tasty Irish breakfast options. 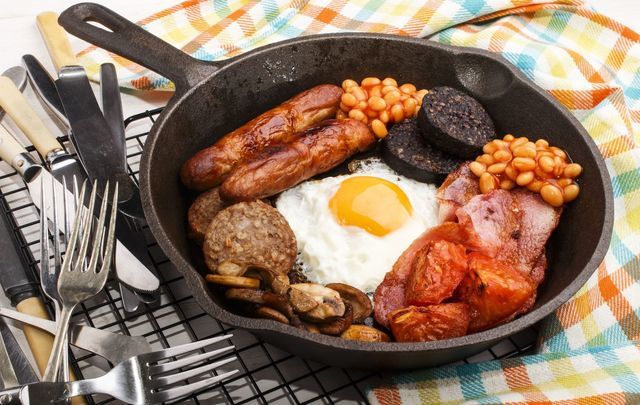 The traditional ingredients of a full Irish breakfast. Getty

An interactive world food map has ranked the top-six most popular traditional Irish breakfast dishes and there are some absolutely mouth-watering ways to start your day on the list.

TasteAtlas, an online compendium of local foods from around the world, ranked the top Irish breakfast foods as part of its series in Ireland, which lists 74 different traditional foods in the country.

The six-part list features some of Ireland's best-known breakfast items, including some dishes that are absolute staples at breakfast tables throughout the country.

Black pudding is popular across the country, but Sneem Black Pudding, which originates in the Iveragh Peninsula in South Kerry, is one of the most popular breakfast dishes in the entire country.

TasteAtlas says that there are just two butchers in the Kerry village that produce the pudding in the traditional way by using fresh pig's blood.

Sneem Black Pudding is made with beef suet, onions, oat flakes, spices in addition to fresh blood. It is also baked rather than boiled, as is common with Irish black pudding.

The breakfast dish is served as pancakes and is usually accompanied by eggs or sausages.

Blaa is a breakfast staple that is almost entirely localized within the county of Waterford.

The bread is only produced in its original form by just four bakeries in the county and its recipe dates back to the 17th century when Huguenots came to the city of Waterford.

Blaas can only be made with flour, water, yeast, and salt - there is no other way to make them - and they are the perfect home for a few slices of bacon at the breakfast table.

Consisting of oatmeal, bread, pork meat, fat, and suet, white pudding is a delicious Irish breakfast staple that is found in the vast majority of traditional Irish breakfasts around the country.

Boxty, minus the corned beef mentioned above, is the more traditional and popular iteration of the Irish breakfast.

The potato pancakes are particularly popular in the north midlands in addition to parts of Connacht and Ulster.

Could it be anything else? The full Irish is found almost everywhere in Ireland and comes in all different shapes and sizes.

Featuring Irish sausages, bacon, black and white pudding, eggs, Irish soda bread, and more additions depending on where you are in the country, full Irish breakfasts are easily the most popular breakfast anywhere in Ireland.