Growing up in a family pub in Athlone, Coyle’s was open 363 days a year, all apart from Christmas and Good Friday, but that didn’t stop “real drinkers” having a pint, or getting caught. 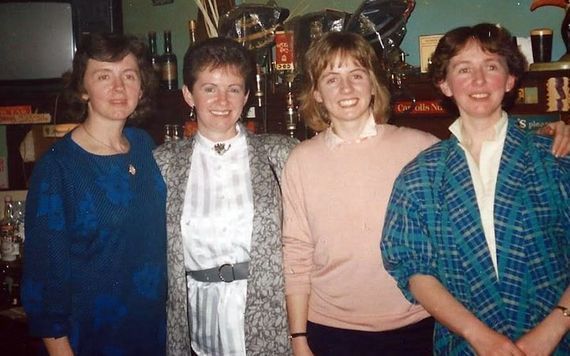 Growing up in a family pub in Athlone, Coyle’s was open 363 days a year, all apart from Christmas and Good Friday, but that didn’t stop “real drinkers” having a pint, or getting caught.

Good Friday, in 2018, was a momentous occasion in Ireland - for the pubs remained open.

When I was growing up my father owned a bar on the corner of Pearse Street and Connolly Street, in Athlone. This town is in the very center of Ireland, on the beautiful River Shannon. We lived above the pub.

Our bar was open 363 days of the year. It only closed on Christmas Day and Good Friday. Serious drinkers (of whom they were many) were determined to have their pints of Guinness on Good Fridays. They would try to coax publicans to let them into their premises. Most did.

We HATED Good Friday for it was the day that our pub was painted and cleaned properly. As my father had nine children – we had to do all this work.

My brother, Michael, remembers, “One Good Friday, Daddy, Patrick and I were painting the bar when three regular customers knocked on the side door, looking for drink. Daddy let them in - on the understanding that they would be quiet. Every 30 minutes one of us would go inside the counter to fill three pints of Guinness for the three boyos. After a while, and just after I had served them a refill, Catherine Barnes knocked on the side door to announce that the guards had just raided Gaffey’s pub next door. Daddy immediately bundled the three lads out, leaving three full pints of Guinness on the counter.

After about ten minutes, I was sent over to Catherine's little sweet shop, across the road, to get an update. She told me that the guards had gone back to the barracks, which was just across the road.

Meanwhile, our three erstwhile customers were hiding in Catherine’s shop. One of them asked me if I could bring over the three pints. Naively I went over and asked Daddy if we could do this. He just burst out laughing at the notion of me carrying a tray of pints across Connolly Street, on a Good Friday, in full view of anyone looking out the front window of the guards’ barracks!”

My brother Patrick remembers the following, “My abiding memory of Good Friday is that I got the job of cleaning the ceiling in the bar before painting it. It was covered in a thick layer of brown tar - a material substance of some interest to pharmacology research. I’ve no doubt it could have been a precursor for chemical weapons.  Big men, of farming stock, stood shoulder to shoulder drinking large bottles of stout and chain-smoked plain cigarettes (Sweet Afton, Gold Flake, Woodbines, Players, and Craven A). We were under no illusions as to the origin of this elicit liquor – collateral smoke damage.  It was so thick and water-insoluble that you’d need many cloths to work your way through the area above the main bar.”

Every Good Friday my sister Mary and I, had to clean the Venetian blinds on the windows in the lounge. The dirt was caked in and needed lots of boiling water to remove it. It was very hard work and we hated it. We swore we’d never ever have Venetian blinds in our houses when we grew up, and we never did!

Sheelagh remembers having to take every ornament, bottle, and glass down from every shelf in the bar. She had to clean them all and they were filthy dirty. (Years later when her children asked her what she wanted for Christmas, she always replied, “Nothing I have to lift up and dust under!”) Now that bars will be open on Good Friday – when will family-owned public houses be cleaning and painting?

My father’s customers were what I considered to be ‘old’ men. They came in every day and sat for hours over their pints of Guinness. They weren’t the kind who thrived on drama or high emotions. Indeed a few of them spent their whole day between the bookies and the bar.  Some were what could be referred to as ‘married bachelors.

The guards raided many pubs every Good Friday and took the offenders to court. When the accounts of these court cases were published in the local paper the men would be referred to, ever after, as ‘Found Ons’.

My brother remembers one such raid. The guards found a few people having a drink in a bar. The guard asked one of the men for his name and he replied 'Gene Autry'. The guard then asked the woman standing beside him for her name and she replied 'Mrs. Autry'. All of this made for amusing reading when this court case was reported in the press.