Review of In America, Tales From Trump Country, by Caitriona Perry. 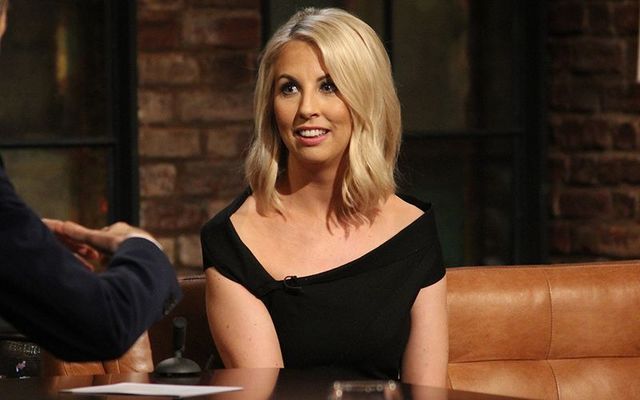 You may know Irish journalist Caitriona Perry best from a famous incident in the Oval Office earlier this year. The Washington, D.C.-based Irish reporter for RTE and author of the new book In America, Tales From Trump Country, got an unexpectedly close encounter with her own subject when she was summoned to Donald Trump’s desk at the White House before he was put through on a phone call to the new Taoiseach Leo Varadkar.

Perry, the White House correspondent for Ireland's national broadcaster RTE, was stunned to be ushered into Trump's presence for a brief meeting he requested himself. “One minute we were outside the window, and the next minute I'm meeting the president of the United States,” she told the press.

Catriona Perry at Donald Trump's desk in the White House.

Trump, still on the line with Varadkar, called Perry over to him. “We have all of this beautiful Irish press,” said Trump. Then he added, “She has a nice smile on her face so I bet she treats you well.”

What exactly was that supposed to mean?

Varadkar is openly gay, Perry is a reporter with almost two decades of experience to her name and not a Playboy bunny.  Did Trump have any idea who he was speaking to?

The answer is of course not. If he had seen an advanced galley of Perry’s remarkable new book on the reasons why he was elected in the first place he would have been even more circumspect.

“An overwhelming number of women around the world contacted me to say they could identify with this experience – unsolicited male attention,” Perry writes in her new book.

Cover of In America, Tales From Trump Country.

She does not say unwanted, but the context seems to make it clear. The moment of their meeting had gone viral around the world, and it had made a lot of women wince.

But Perry, like a lot of women, has also learned to develop a thick skin in a field where men predominate. In her life, as in her work, she has learned how to focus on the central issues, not all the distracting chatter.

“This is also what Trump did,” she writes. “He tapped into that zeitgeist of unfulfilled potential, of overbearing frustration, and gave the people (of the Rust Belt) what they wanted. As a veteran businessman, he saw a gap in the market and went for it – big league.”

You know all about why so many people didn't vote for Trump, she writes. Her book is about who – and why – some did. Tragically, if you take a map of the states with the highest number of people living below the poverty line and a map showing the states that voted for Trump and you lined them up on top of each other, they are almost identical, she writes.

In these states the Affordable Care Act (i.e. Obamacare) is often what is keeping people from bankruptcy and homelessness; that's the same Obamacare that Trump has mercilessly attacked since he came to office.

What Perry understands and writes about with an almost unprecedented clarity is how this silver spoon plutocrat who has never know privation or want somehow convinced the white working class in America that he was one of them, that he understood them, that he shared their outlooks.

Trump won by promising that manufacturing jobs would magically come back to a Rust Belt that has seen its economy crater. He promised to build a magic wall to stem undocumented immigration. He promised to repeal Obamacare and in turn make Trumpcare affordable.

He promised not to take any days off being president for golf trips like Barack Obama. He promised a so-called ban on Muslims coming into the country. He promised to protect DACA children from jeopardy.

He hasn't delivered on any of these signature campaign promises and his base – the most alienated people in America, who feel that the country has moved on without them – have more and more reason to suspect he may never.

Dismiss these voters and their retribution at your peril, Perry concludes. Their wrath may be directed at Republicans as easily as Democrats.