Having spent years working as an accomplished Irish journalist in the US, the hard-working Caitríona Perry was flung into the international limelight yesterday. 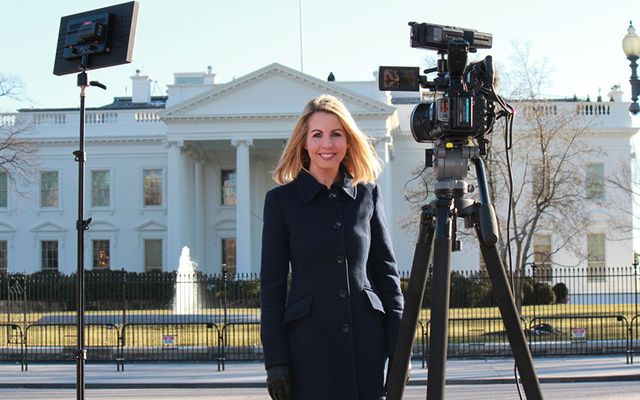 Having spent years working as an accomplished Irish journalist in the US, the hard-working Caitríona Perry was flung into the international limelight yesterday following what she referred to as a “bizarre” encounter with President Donald Trump that has since gone viral.

Why is everyone talking about her?

As Trump spoke to Ireland’s new leader Leo Varadkar, Perry was among the press being brought into the Oval Office and was called over to the desk by Trump so she could tell him who she was because the President felt she had a lovely smile.

The remarks have been met with much condemnation by those who believe it’s just another example of Trump’s attitude towards women in that the one-woman newsroom was singled out because of her appearance and not for the endless hours of work she puts in. Many Americans were quick to apologize to her for their President’s behavior while others have told her she should just accept the compliment.

Where is she from?

A native of Dublin city, 36-year-old Perry is a graduate of Dublin City University where she completed an Undergraduate Degree in Journalism in 2002 and a Masters Degree in International Relations in 2010.

She’s been working as a broadcaster since 2000, first working with radio station Newstalk before joining Today FM. She joined RTÉ, Ireland’s national broadcaster, in 2007, this year marking her tenth anniversary with them.

Perry always had her eye on the prize, however, and wanted to work as a foreign correspondent, deciding to head back to college for an MA to give herself the academic knowledge to hand in hand with the editing, self-shooting, and production skills she had built up whilst on the job.

Working as RTÉ’s Washington D.C. correspondent is the role that many people are gunning for but Perry did enough to make herself stand out from the crowd, securing the position in February 2013.

Read more: Trump said he feels like he knows all the Irish people in the US - does he know you? (POLL)

What exactly is her role in the US?

Key skill for a TV correspondent...the ability to climb little metal ladders and steps on the sides of buildings and then stand on rooftops without getting too close to the edge. (Plus I seem to have brought the misty rainy Irish weather back to the US with me. Oops.) 🎼#imontopoftheworldlookingdownonthewhitehouse🎶 #whitehouse #Trump #news #fake-news

Moving to D.C. with her husband, Perry took on the role of RTÉ D.C. Correspondent but as the broadcaster’s sole full-time journalist in the US, it really is a country-wide role, often clocking up 20+ hour working days.

Having already visited 35 states, she has often visited many states in a week, operating the camera by herself, editing her own work, as well as acting very much as her own producer in covering stories. She also does all her own hair and makeup and while we’re want to mention her appearance after this week’s encounter with Trump, each story is covered with elegance and style.

“There is an awful lot of jetting around…officially I’m RTE’s ‘Washington Correspondent’ but it’s really more like ‘US Correspondent’ and I rarely spend one full week in DC,” she told EVOKE.ie.

“I’ve been known to get through four or five states in a week … it’s a bit mad, but it’s fantastic at the same time. I do feel very privileged to have this opportunity. I worked hard to get it, so I’m making the most of it.

“I’m basically a one-woman newsroom for a whole continent, with the full range of subject matter at my disposal.

“This past week has been particularly crazy,” she continued, outlining a working week of hers some time ago.

“I was reporting on President Obama’s new effort to close Guantanamo Bay then I was on a plane to LA the next day for all the Oscars stuff, then literally just a few hours after I caught Ireland’s latest Oscar winner Benjamin Cleary on the red carpet after his win for a quick interview, I was back at the airport to jet back to DC for Super Tuesday.”

Does she ever get a break?

Even with the never-ending news cycle, Perry somehow still finds time to be a self-confessed “fitness junkie” and is a fan of paddleboarding which she often posts about on her social media accounts.

“I run a lot that’s my thing,” she states. “My best time for the marathon is 4hr 6mins. I also do swimming and cycling, Pilates, yoga and a bit of weight training. I’m always on the go.”

Even when it looks like she’s having the time of her life as she was at the Oscars, Perry can still be on the clock, however. While we may have simply seen the glamorous dress and her standing on the red carpet, we weren’t privy to the 5am start for hair and makeup or the 2am the next morning finish time when she finally wrapped up reporting. Working on US time is not all it’s cracked up to be when you still have to ready for the Irish morning radio shows!

Was she surprised at Trump’s election?

Far from it. While surprised by the divide in America's politics being so black and white, Perry had visited enough US states and talked to enough supporters of all kinds to understand the love that many people had for the President.

“The Trump victory isn’t that unbelievable,” she told the Irish Examiner.

“Whole swathes of people here are very enthusiastic about him. And he’s now doing everything he pledged during his campaign. They weren’t empty promises. He is following through. People in urban areas are deeply traumatized by having Donald Trump as president but there are lots of people who are very happy and that has to be respected.” but does think that journalism is needed now and that it’s important”

She can also be seen here explaining to the Irish public why women voted for Trump despite the likes of the Access Hollywood Tape:

Trump may not be too impressed with some of her invites to the perfect dinner, however, as she’d pick a former US President over himself.

“Bill Clinton — he’s got to have some great stories to tell; Steven Speilberg; Mary Robinson — she’s fantastic; Daniel Day Lewis — I think he’s a stunning actor,” she told the Examiner.

How has being Irish helped her?

As many Irish immigrants to the US find in 2017, unlike previous points in history, being Irish helps not hinders your chances in the US and that’s exactly what Perry also found.

“It’s a big leg up, and other journalistic colleagues are quite jealous as it opens a lot of doors,” she once said.

Is this the first time she’s become a viral hit?

While this is the first time she’s gone viral worldwide, she has had two highly watched incidents in her career that went viral in Ireland.

One involved a brush with some of her equipment in New York when she continued to remain calm and collected throughout:

The second came with an equally bizarre encounter with country singer Garth Brooks when he began to ask her the questions instead of the other way around: